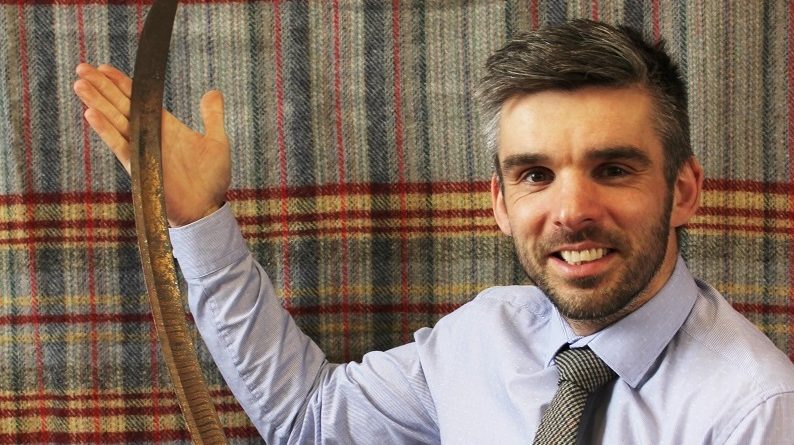 A shrewsbury couple had a pleasant surprise when an antique sword they found in a storage container in 1972 then stored in their loft sold at Shropshire auctioneers Trevanion & Dean for £5,200.

The fine quality silver gilt presentation Marmeluke sword and dated to 1818, retailed by Mackay and Cunningham in Edinburgh bears the royal cipher.

Auctioneer Aaron Dean explained, “The couple brought the sword in to me during on of our weekly valuation sessions. I recognised it immediately as being an item of some importance having handled a very similar piece in the past. They explained they had purchased a storage facility in 1972 and had found the sword lying on one of the shelves. They placed it in their loft for safe keeping and had forgotten about it until they were having a clear out.”

Despite its poor condition, Aaron knew he was handling an exceptionally rare piece and took the antique sword to be assessed by one of the leading weapons experts in the UK, as Aaron explained “With such niche markets as this, acquiring the expert opinion of someone in this field is vital, and gives potential purchasers confidence to bid.” Estimating it at £2,000-£4,000, the sword enticed bidding on the day and sold to a UK private collector, much to the delight of Aaron and his clients.

A Marmeluke sword is derived from sabres used by Mamluk warriors of Maluk, Egypt and the shape was adopted by several western militaries, including the British Army in the early 19th century, following Waterloo in 1815.

The Duke of Wellington carried a Marmeluke sword from his days serving in India and throughout his career. As the man who defeated Napoleon, was Commander in Chief of the Forces and then Prime Minister, his tastes had considerable weight and his choice of weapon became de rigueur. The Marmeluke sword remains the ceremonial side arm for some units to this day.

Elsewhere in the sale, a Bank of England Abraham Newland (1778-1807) One Pound note dated 15th April 1799 sold for £2,600.  Auctioneer Christina Trevanion discovered the note hanging on the wall of a Whitchurch property during a routine house clearance. “It was quite incredible,” she said. “It is such a fragile piece, we received a phenomenal amount of pre-sale interest despite it having a tear and being in quite poor order. Normal notes from this period do not usually garner such phenomenal results, but this note was signed by Abraham Newland, chief cashier at the Bank of England from 1782-1807.”

Renowned as an eccentric character, Abraham actually slept at the Bank of England for 25 years, becoming largely a stranger to his own home. The expression ‘An Abraham Newland’ came to mean a bank note, because without his signature, no Bank of England note was genuine.

He is perhaps best known for his self-written epitaph ‘Beneath this stone old Abraham lies, nobody laughs, and nobody cries, where he has gone, and how he fares, nobody knows and nobody cares’.  “I think Abraham would be quite amused to know now that his signature generates quite so much interest!” explained Christina. “The vendors of the piece were delighted, they are currently holidaying in the Caribbean and so were able to watch our auction via our online bidding platform whilst sipping cocktails in the sun!”