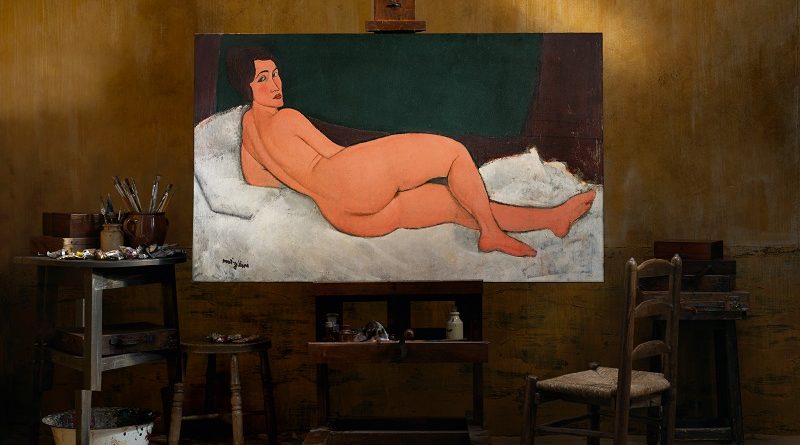 The highest estimate ever placed on a work of art to go to auction now stands at in excess of $150 million, following Sotheby’s unveiling in Hong Kong of Nu couché (sur le côté gauche) by Amedeo Modigliani. 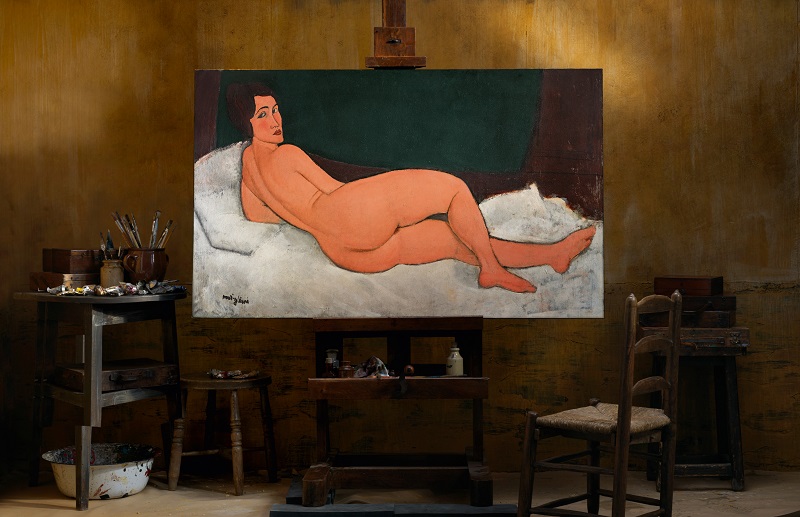 The auction house expects the painting to sell for more than the $150 million price tag at its Impressionist & Modern Art Evening Sale on May 14 in New York.

Painted over a century ago, Nu couché is the greatest work from the iconic series in which Modigliani reinvented the nude for the Modern era.

At their debut exhibition in 1917, these striking and sensual images stopped traffic – quite literally – and prompted the police to close the show. Today, the series is recognized as one of the seminal achievements in Modern painting.

The shock and awe that Modigliani’s nudes continue to elicit was evident most recently during Tate Modern’s celebrated retrospective of the artist’s work that included Nu couché.

In addition to being the finest example from the series, Nu couché is distinguished further as the largest painting of Modigliani’s entire oeuvre – measuring nearly 58 inches / 147 centimetres across – and the only one of his horizontal nudes to contain the entire figure within the canvas.

The majority of the 22 reclining nudes from the series are found in museums, with particular depth in the United States: the Solomon R. Guggenheim Museum, The Museum of Modern Art and The Metropolitan Museum of Art in New York each hold three examples. Outside of the United States, institutions with reclining nudes include the Long Museum in Shanghai and The Courtauld Gallery in London.

Nu couché was acquired by the present owner at auction in 2003 for $26.9 million. In 2015, another reclining nude from the series sold at auction for $170.4 million, at the time marking the second-highest price ever paid for a work of art at auction.

Simon Shaw, Co-Head Worldwide of Sotheby’s Impressionist & Modern Art Department, commented: “This painting re-imagines the nude for the Modern era. Modigliani depicted his models as confident and self-possessed in their sexuality.”

He continued, “Nu couché is an incredibly sensual image, with the sitter’s gaze meeting the viewer’s head-on in truly mesmerizing fashion. While situating itself within a classical canon of nude painting, the work is radically innovative in style: Modigliani assimilates a world of visual cultures across the centuries, from Egyptian, Japanese, African, Indian and Iberian sculpture, from Renaissance frescoes through Romanticism to the cutting-edge of Cubism. Together these pictures signal a watershed in perhaps the greatest tradition in art – there is the nude before Modigliani, and there is the nude after Modigliani.”

Modigliani began painting nudes in 1908, but it was only after he abandoned sculpture in 1914 that he developed the unique idiom evident in Nu couché. His aesthetic was gleaned from the artistic precedents of Italian Renaissance and Mannerist painting, the linear simplicity of African carvings and the earth-toned palette and geometric modelling of Cubism – all of which can be seen in the present work.

The majority of Modigliani’s output was based in portraiture, which, more often than not, depicted those who surrounded him: fellow artists, poets, lovers and patrons. Aside from a veritable who’s who of the more bohemian artistic circles in Paris, Modigliani would also seize upon chances to find other sitters – though the opportunities for unpaid models were few and far between.

It was not until Modigliani’s dealer Léopold Zborowski stepped forward with both a space and paid models that Modigliani embarked on his great series of nudes. Zborowski provided the artist a stipend of 15 Francs a day, and paid the models five Francs to pose in an apartment just above his own at 3 Rue Joseph Bara.

Draped in sheets, perched on chairs, reclining on sofas or beds, the models are relatively anonymous – Modigliani did not paint his prime paramours in the nude. But while he may have had emotional distance from the sitters, he certainly did not have physical distance: the women dominate their space, filling the frame with stretching hands and feet, forearms and calves literally off of the edges of the canvas. Their nudity is self-assured and proud, not cloaked in myth or allegory.

In total, Modigliani completed 22 reclining nudes and 13 seated nudes between 1916 and 1919, with the majority – including the present work – painted in 1917. And from the first moment the works were displayed that year, they stopped traffic.

At the request of Zborowski, Parisian dealer Berthe Weill staged an exhibition of Modigliani’s paintings and works on paper. In the window of her gallery – by some accounts directly hung in the window, and by others clearly visible through it – were a number of the nudes.

Upon opening, crowds immediately gathered in the exhibition to witness the strikingly-real works, and traffic began to build up outside. Across from Weill’s gallery was a police station, and the commotion did not go unnoticed. An officer traipsed across the road and asked for the removal of the offending canvases, which he considered indecent. Weill’s refusal to do so found her in the police station speaking with the police chief. The show was closed with Zborowski only selling two drawings at 30 Francs each.