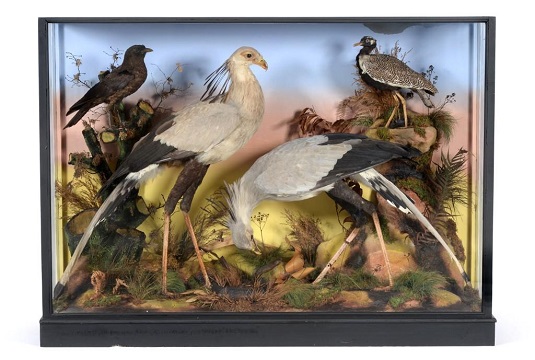 Three antique taxidermy dioramas of African birds have sold for a combined hammer price of £29,500 in a North Yorkshire saleroom. 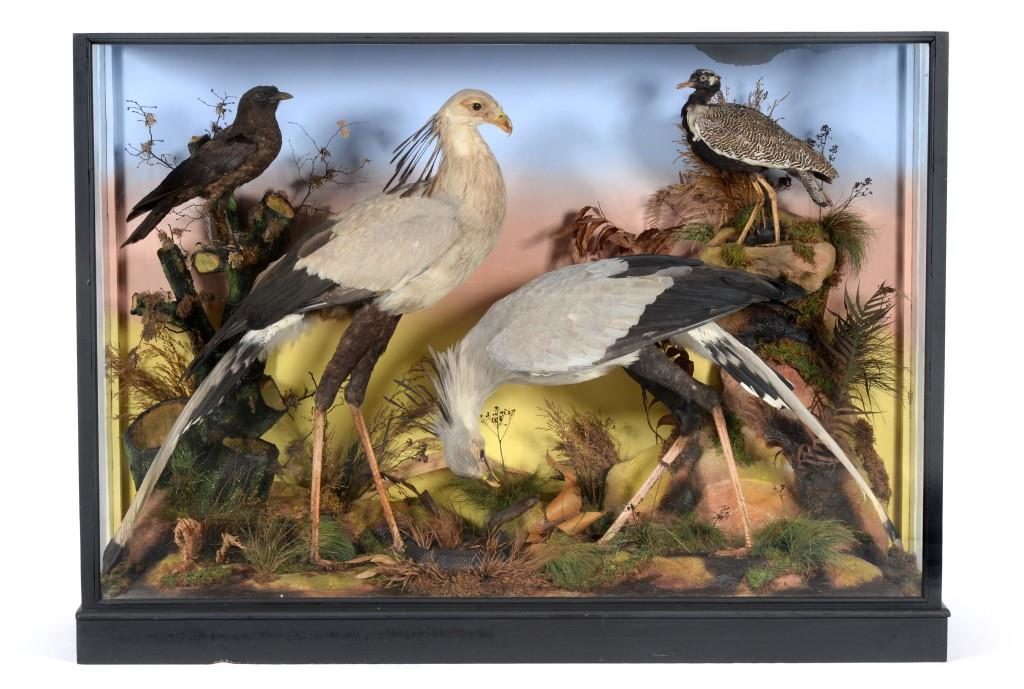 Prepared by taxidermists Ashmead & Co. of London, the large, cased items had at one time been destined for a home in the British Raj.

The cases contain examples of African birds that are rarely seen at auction, such as the large Secretarybirds, a Blue Crane, a Jackal Buzzard and Juvenile Black Storks. All three cases contain a paper trade label reading: ‘Prize Medal 1862, Ashmead & Co, Naturalists, 35, Bishopsgate, Without’.

Auction house Tennants’ specialist Robbie Bright said of the cases, “These really were dioramas of exceptional quality, and many of the species they contain rarely come up for auction. It is very rare that three such cases from an original commission from the same taxidermist have been kept together for so long. We knew they would do well and they had much interest ahead of sale, but we are delighted to achieve such strong results for traditional taxidermy.”

Taxidermy firm Ashmead & Co. was well known for their preparation of exotic birds, such as the present cases which contain birds endemic to Africa.

By repute, they were commissioned by a wealthy British family who resided in Mysore, capital of the Kingdom of Mysore in Southern India. They were brought back to the UK when British rule started to wain around 1947, and they were housed in Norfolk until approximately 15 years ago when they were moved into storage, until they were purchased by the current vendor.

George Ashmead, later Ashmead & Co were a family dynasty of taxidermists, working in London from c.1830 to at least the 1920s.

Founded by George Ashmead, the company was known to have operated from premises on Duke Street, Mayfair from 1830.

The business subsequently was passed down the generations, and from c.1865-1879 was located at 35 Bishopsgate, possibly under the control of Argent Ashmead, George’s grandson.

In 1879, the business moved to Moorgate, but in 1923 had once more relocated to Bishopsgate, this time number 180.

Elsewhere in the taxidermy and natural history sale, other highlights included: