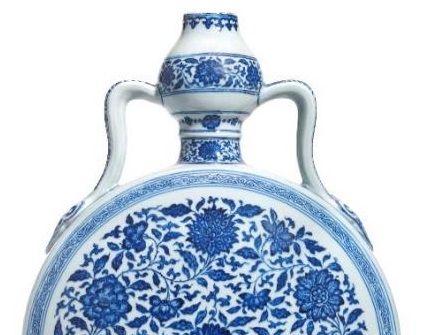 The Soame Jenyns Collection of Japanese and Chinese art will be one of the highlights of Christie’s Fine Chinese Ceramics and Works of Art auction on November 6.

The array of rare works included in the sale, ranging from imperial ceramics, fine jade carvings and Buddhist art, to huanghuali furniture and paintings from modern Chinese artists, will also be on view to the public from November 2 to 5. 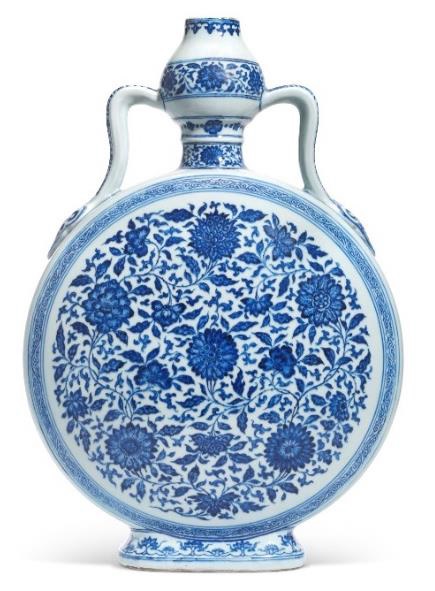 The auction will be led by a moonflask (right), Bianhu, Yongzheng six-character seal mark in underglaze blue and of the period (1725-1735). This magnificent flask is exceptionally large, and takes both its form and decoration from vessels made in the early 15th century.

The Yongzheng Emperor was a keen antiquarian and a significant number of objects produced for his court were made in the antique style, particularly blue and white porcelain, and so their style was often adopted for imperial Yongzheng wares in the 18th century. The vessel is decorated with stylised floral scrolls and a pair of elegant strap handles, each decorated with flowers and foliage, terminating in ruyi heads.

The sale will be highlighted by important works of art from the collection of the late Soame Jenyns, which will be presented across the Fine Chinese Ceramics and Works of Art auction. 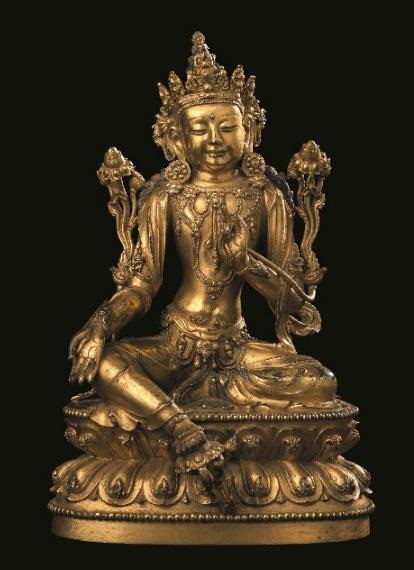 Soame Jenyns (1904-1976) was a legendary figure in the field of Chinese and Japanese art. He was an esteemed British art historian, collector and connoisseur and worked at the British Museum authoring several seminal books on East Asian art.

The collection was built throughout his lifetime and will be led by a gilt-bronze figure of Avalokiteshvara (1426-1435) (estimate £150,000-200,000). It is engraved with a six-character inscription, which can be translated as ‘Bestowed [during the] Xuande era [of the] great Ming’.

The figure perfectly reflects the connoisseurship of Soame Jenyns.

It is rare for the base plate of such an old bronze to be intact and confirms that the figure had been consecrated in a Buddhist ritual. Both aspects are highly appreciated by collectors of Buddhist bronzes.

Further highlights of the collection include a rare famille verte ‘Yu Tang Fu Gui’ teapot (estimate: £20,000-40,000), an elegant and fascinating tribute to the skills of porcelain decorators at the imperial kilns in the early Yongzheng reign; and a ‘peony’ ogee-form bowl and cover (estimate: £10,000–15,000), likely to have been made in the early 18th century within the Imperial Palace Workshops in the Forbidden City.

Painted enamel was a European technique, which was introduced to China in the Kangxi period (1662-1722). The bowl emphasises the technical sophistication in the workshops and the cultural and artistic exchange between China and Europe in the 18th century.

In addition to the live auction, The Soame Jenyns Collection of Japanese and Chinese Art online will offer a superb selection of Japanese lacquer and porcelain including a rare and important Kutani fan box, dating to the Edo period (mid-17th century) (estimate: £20,000-30,000), alongside Kakiemon and Arita ceramics and porcelain from the Ming and Qing dynasties including wucai, blue and white, and enamelled ceramics. 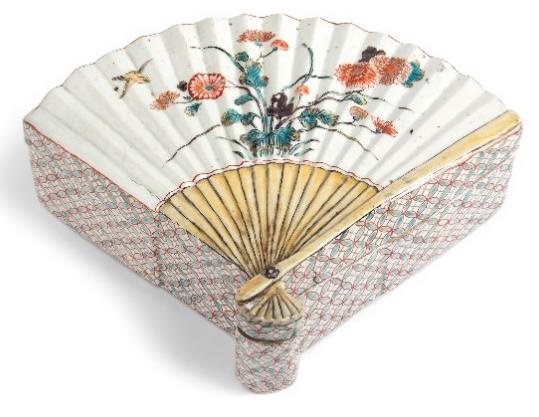 The highlight of the jade offering comprises the collection of Chinese hardstone carvings from the late John Pearce (1918-2017), purchased from the renowned Chinese art dealer, T. Y. King (金從怡), in the 1950s and 1960s. 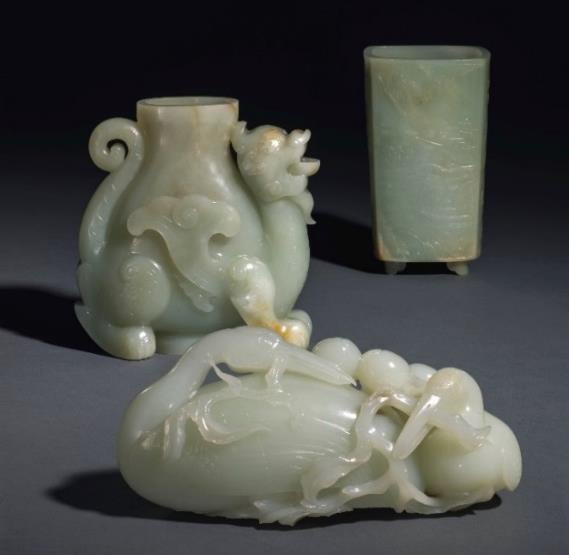 Born into a family with a rich Hong Kong heritage, John Pearce was appointed an MBE (Member of the Order of the British Empire) by George VI for his intelligence work during the Second World War. He was a prominent businessman and became a noted bloodstock breeder and racehorse owner.

For forty years he lived at the Hong Kong Mandarin Oriental hotel, where he amassed an impressive collection of art.

The collection is led by a large white jade cranes group from the Qianlong period (1736-1795) (estimate: £30,000-50,000). Skillfully executed as a larger and a smaller crane grasping a leafy peach branch, the details of their feathers are finely incised. The imagery of cranes and peaches portrays a wish for longevity, with both symbols closely associated with the Immortal, Shoulao, the God of Longevity.

In Chinese mythology, peaches give long life to whomever consumes them, and hence are heavily featured in imagery associated with Immortals and other legendary figures.

The collection also presents a greenish-white jade ‘Mythical Beast’ vase (estimate: £15,000–20,000). Dating to the 18th century, the impressive vessel is carved as a baluster vase which forms the body of a bixie, considered to have the power to dispel evil.

Additional works from the collection include a greenish-white jade square-section brush pot, Bitong, 18th century (estimate: £10,000–15,000). Standing on four ruyi-form feet, each side is carved with a panel depicting a different scene of a seated scholar in a pavilion, a cowherd, a fisherman, and a farmer, all in a natural landscape.

A magnificent sancai and blue-glazed pottery figure of a guardian warrior dating to the Tang Dynasty (618-907) (estimate: £150,000 – 250,000) will also be offered. The guardian is modelled with an unglazed head, bearing a fierce expression. These large sancai tomb figures were the preserve of the Tang elite, and indeed some of the kilns producing them have been linked to the court.

The current figure would have been particularly valuable since it has been decorated with a generous amount of blue glaze. In Tang times the cobalt used to create the blue glaze was imported into China and was expensive and used sparingly, unless the family commissioning the sancai ware belonged to the highest echelons of society.