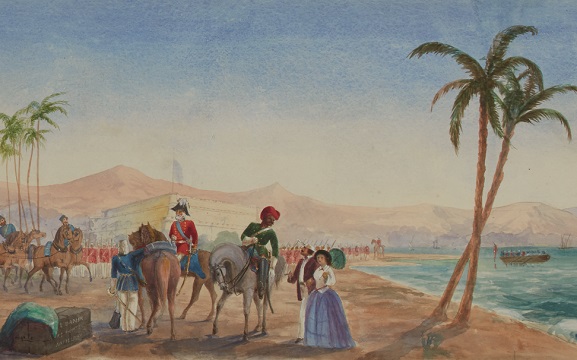 A 50-metre long rare moving panorama which brings to life the epic journey over land and sea between Britain in the Far East in the 19th century is one of the highlights of Sotheby’s inaugural Art of Travel and Exploration sale this month.

The pair were both artists of some standing, and were also employed as shipping agents in the city of London.

Pre-dating other forms of entertainment such as cinema, moving panoramas of this type were extremely popular spectacles in the nineteenth century.

While the example in the auction is on a more practical scale, those designed to be seen in theatres are thought to be the largest paintings ever made. The Lambs intended the work to be viewed as a moving image and it would originally have been mounted onto wooden spools, which were to be operated by hand.

The panorama was also to be accompanied by a narrative, written by Lamb Secundus; his humorous text survives in its original form and is included for sale. This extraordinary achievement comes to the market from an English private collection, having been passed down the artists’ family by descent to the current owner.

Richard Lowkes, Sotheby’s 19th-century European Paintings Specialist, said: “London to Hong Kong in Two Hours is an amazing survival from the golden age of the moving panorama. It was very exciting for us to unroll the panorama in its entirety for the first time, and see the bright vivid colours which are as fresh today as when the work was painted over 150 years ago.

“Taking in highlights such as Jerusalem, the pyramids, and the Red Sea, and in Sri Lanka banyan trees and a tiger hunt, the panorama is full of details which bring to life both west and east as seen through the eyes of a Victorian traveller.”

The sale takes place on December 13.