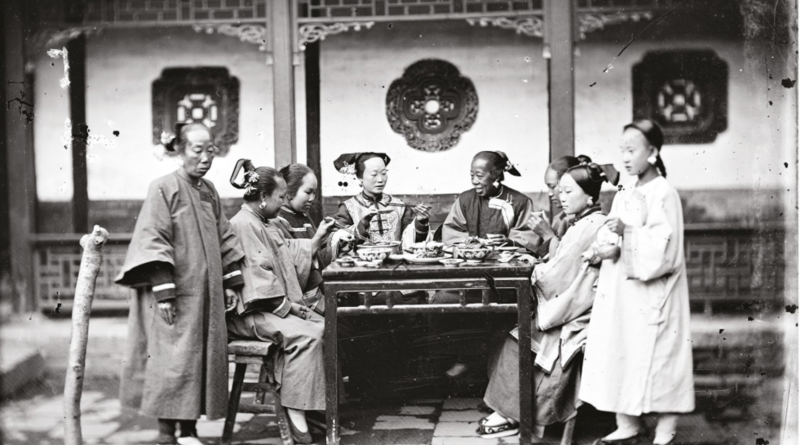 Pictures of 19th-century China by the pioneering Scottish photographer John Thomson are currently on show in Bournemouth. Antique Collecting goes behind the scenes, presenting a collecting guide to his work

Edinburgh-born John Thomson (1837-1921) set off for Asia in 1862 and, over the next 10 years, chronicled life – from royalty to street vendors – in a number of Asian countries, including Siam, Cambodia and Vietnam. But it was his photographs from four years spent in China that form one of the most extensive records of the region taken in the 19th century.

In 1921, the pharmaceutical tycoon Sir Henry Wellcome acquired a collection of 600 of Thomson’s original glass plate negatives, but it took the intervention of exhibition curator Betty Yao many years later to bring them to the wider world.

Yao was so touched by the authenticity of the photographs when she first saw them in 2006, she quit her job as a programme director at Asia House in London to become their curator. In 2009, she took an exhibition of Thomson’s China work around the world. Now the show is at the Russell-Cotes Art Gallery and Museum in Bournemouth.

Thomson was born in Edinburgh on June 14, 1837, one of four children and the son of a tobacconist. By 1858 he had completed an apprenticeship in the principles of photography at a local optical and scientific instrument manufacturer.

At the time, Scotland was at the forefront of technological advances in photography, with the country’s scientists, artists and photographers playing a huge part in pioneering the new medium.

Two years after the daguerrotype was unveiled in 1839, Wiltshire-born William Henry Fox Talbot developed the calotype, with input from Scottish scientist, David Brewster. Such was the appetite for this new artform that the Edinburgh Calotype Club was formed in the early 1840s – the oldest photographic club in the world.

It was the era of David Octavius Hill and Robert Adamson, whose studio pioneered the move away from traditional portraits, in order to capture landscapes, urban scenes and people in natural settings across Edinburgh and Fife.

These action photographs – which influenced Thomson – were revolutionary for the time. Hill and Adamson’s genre art photographs were the first significant works to use the medium of photography in a self-consciously artistic way.

Scottish photographer Thomas Annan went on to use the later wet collodion process to document the atrocious conditions of the Glasgow slums, while George Washington Wilson operated one of the world’s largest printing businesses in Aberdeen. Wilson also developed techniques to allow for photography production outside the studio, later taken up to good use by Thomson.

In 1862, aged 25, Thomson left Edinburgh for Singapore to embark on a 10-year journey around the Far East. Initially, he specialised in portraits of European merchants, but gradually developed a keen interest in local peoples and places. He began travelling extensively throughout Malaya and Sumatra, documenting village life.

In 1864, Thomson moved to Siam where he made a name for himself photographing the king and members of the royal court. He stayed for just over a year, before heading for the ancient cities of Angkor in the Cambodian jungles.

Unlike most photographers working in the Far East at that time, Thomson was not a government official,
or missionary. He was a professional photographer who was fascinated by Asia and its people. Thomson
possessed an open mind and was sensitive to the lives and surroundings of his subjects.

Thomson eventually settled in Hong Kong in 1868. For the next four years, he travelled around China
photographing various peoples and cultures from Hong Kong and Canton, Peking, Shanghai, Formosa as well as venturing deep into central China.

His subjects ranged from urban street beggars and peasants in rural settings to mandarins in imperial palaces. Later, before returning to Britain to settle for good, Thomson made one final photographic journey to Cyprus in 1878.

Tomson used the wet collodion process where images were exposed on a glass negative in complete
darkness, a process which required in a portable darkroom tent on location. He travelled with a large
number of cumbersome crates, glass plates and bottles of highly flammable and poisonous chemicals.

Given that his arduous journeys took him through difficult terrains, sometimes to regions where the
Chinese had never seen a white man before, it is all the more remarkable that Thomson was able to make photographs of such beauty and sensitivity.

Thomson’s photographs introduced the Victorian audience to the people and cultures of the Far East and established him as one of the pioneers of photojournalism.

In 1870, Thomson relinquished his studio in Hong Kong, before leaving for the mainland of China. He also published his first book about China called Views of the North River with the Hong Kong publishers Noronha and Sons.

In later years, Thomson went on to document the lives of London’s homeless, while serving as the official photographer of the British royal family.

After his death in 1921, Thomson’s negatives were brought by the pharmaceutical tycoon Sir Henry Wellcome. In the ‘70s, the Wellcome Trust’s collections librarian, William Schupbach, came across them,
described as “scratched negatives”. Seeing their historic value he arranged for prints to be made from the negatives; they have since been digitalised.

The importance of John Thomson as a photographer has only been fully established in the last 40 years thanks, in part, to the appearance and appreciation of his work at auction, says Chris Albury, photography specialist at Dominic Winters Auctioneers in Cirencester.

Thomson spent 10 years in the Far East recording a great body of work, which resulted in a unique record of “exotic’” societies and their monuments. It is little wonder that these haunting images still capture the modern imaginations of collectors from the West and, increasingly, the East.

Thomson was equally adept at portraits as landscapes and the naturalness and beauty of his scenes and compositions make his works both compelling and expensive.

Thomson used his photographs as documentary reportage in the form of photo books and these expensively-produced works, using real photographs, are increasingly uncommon, especially complete.

The finest copies with the best impressions can fetch eye-watering sums, notably his book Foochow and the River Min (1873). This book contains 80 carbon prints or autotypes, a permanent photographic process revered for its warm tones and resistance to fading.

More typically, it is loose photographs and albums of collections of photographs that come up for sale. As a rule, it is the largest photographs in tiptop original condition that can command a sum of £1,000, sometimes more.

Photography as an investment is always a risk, as tastes change. But, with the growing globalisation of collecting, it seems a safe bet that if you can buy the very best Thomson books and photographs of Far Eastern subjects at sensible prices now, then the chances of a good appreciation over time are strong.

John Thomson’s photographs will always stand the test of time.

China through the lens of John Thomson, (1868-1872) runs at Bournemouth’s Russell-Cotes Art Gallery and Museum runs from now until June 2. The exhibition is accompanied by a range of talks, demonstrations and family events. For more details visit www.russellcotes.com