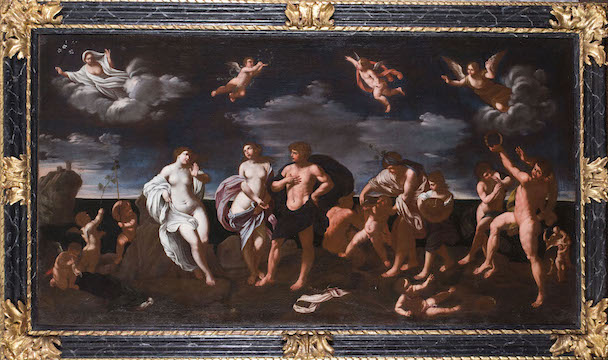 Over 100 of the UK’s leading specialists are set to showcase more than 5000 objects at BADA 2019, which will return to Duke of York Square in Chelsea next month.

Spanning ancient antiquity to modern and contemporary, the fair will offer art lovers, collectors and curators an opportunity to browse and buy exceptional items of museum quality.

One such work is a recently rediscovered Old Master painting by Giovanni Francesco Romanelli (1610-1662), one of the most influential and important painters of the Baroque period, which will be exhibited by Ottocento Ltd.

The painting, a copy of Guido Reni’s famous masterpiece ‘Bacchus and Ariadne on the Island of Naxos’ was executed in 1642 with the blessing of Pope Urbano VIII.

Reni’s original was commissioned for Henrietta Maria de Bourbon, wife of Charles I and was due to adorn the ceiling in her bedroom at the Queen’s House Greenwich, however Henrietta Maria was driven into exile in France during the English Civil War and the painting was sold in 1648 to secure her precarious financial position.

With Reni’s original missing or destroyed for more than three centuries, Romanelli’s copy remains a highly important painting in its own right, giving BADA visitors a rare chance to envisage Reni’s missing masterpiece in its entirety.

A more contemporary highlight but no less rare will be Sir Alfred Munnings’ painting of the internationally acclaimed polo player Robert Strawbridge II, which is offered for sale for the first time at BADA 2019 by The Parker Gallery. An inductee of the Polo Hall of Fame, Strawbridge was at the height of his talents when he commissioned the painting, during Munnings’ 1924 tour of America. The work has remained within the family ever since and will be on display in the UK for the first time at BADA 2019.

Clock specialist Tobias Birch will be taking a different approach to his stand this year, with a curated selling exhibition of over 20 clocks and watches made by the famous 18th century partnership of Thomas Mudge and William Dutton.

The pair met as apprentices to George Graham and formed a partnership in 1765, sharing an ethos of quality, not quantity, which saw them produce many of the finest clocks of the late 18th century.

The collection has taken two years to assemble and will include longcase clocks, scientific regulators, table clocks, wall clocks and watches. Tobias will offer daily talks through the event, offering insights in to the partnership that defined the standard for Georgian clockmaking.

Lovers of fashion will have a unique chance to enjoy previously unseen work from one of the most celebrated designers of the 20th century, Yves Saint Laurent.

In 1961, French publisher Jacques Damase commissioned Yves Saint Laurent to produce a series of sketches for a children’s book Un Diable à Paris (A Devil in Paris). The book was never published, and the drawings remained in private hands until recently.

First-time exhibitors at BADA, 3Details Ltd,will be showing a collection of 17 of the drawings.

Appropriately for an event designed for collectors and curators, one of BADA 2019’s highlights is closely connected to one of the greatest collectors of the late 18th century, the Comte D’Artois, later Charles X of France.

The pair of topographical paintings from exhibitor Frank Partridge are by Pierre Denis Martin and depict the Pavilion and village of Vaux-sur-Seine, close to D’Artois’ Chateau Maison.

After buying Chateau Maisoin, D’Artois persuaded his brother Louis XIV to buy all the nearby forest land for hunting and it is believed that the pavilion illustrated was used by D’Artois as a hunting lodge.

It is extremely rare for paintings by Pierre Denis Martin to come onto the market, the bulk of his works are held in the collections of French Museums.

Another work of fascinating provenance is Edward Lear’s watercolour ‘Pentedatilo, Calabria’, which will be exhibited at BADA 2019 by Karen Taylor Fine Art. The painting was born of Lear’s 37-year friendship with the poet laureate Alfred, Lord Tennyson and his wife Emily, and forms part of the artist’s unfinished project ‘Painting-Sympathisations’, 300 memories tied to 300 poems. Pentedatilo is inspired by a stanza in Tennyson’s poem ‘The Palace of Art’.

However, after repeated attempts to start the project, Lear began his 300 memories in earnest in 1878, but died 10 years later with unfinished Tennyson canvases in his studio.