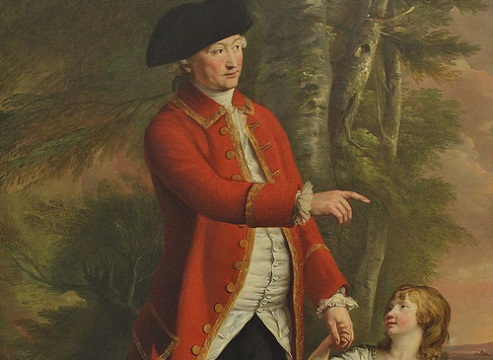 The contents of a grand Cotswold home will go under the hammer in Cirencester next month, with paintings, furniture, militaria, glass and garden ornaments among the standout lots at the single-owner sale.

Moore Allen & Innocent will be selling the contents of the country home on behalf of the owner, with museum-quality paintings leading the sale.

The best of the paintings includes a portrait of John Russell, 4th Duke of Bedford (1710-1771) with his grandson George Churchill, Marquess of Blandford, later 5th Duke of Marlborough (1776-1840), which was initially attributed to Thomas Gainsborough but has been identified as the work of the Irish portrait painter Hugh Douglas Hamilton (1740-1808).

Meanwhile, a portrait of the German prince Wolfgang Wilhelm, Count Palatine of Neuburg (1578-1653) in the manner of Sir Anthony Van Dyck is attributed to a follower of the leading English court painter of the 17th century.

The two-metre tall portrait shows the subject wearing a clasp of the Order of the Golden Fleece – a Roman Catholic order of chivalry which he received by converting to Catholicism and practising neutrality during the Thirty Years War. Bids of between £10,000 and £15,000 are expected.

Elsewhere in the auction is a good collection of continental and English country furniture. Best among the lots is a Spanish 18th-century walnut 10-seat dining table, which commands an estimate of £2,000 to £3,000.

Among the militaria is a Victorian scarlet officer’s shabraque – or saddle cloth – for the First Gloucestershire Hussars, which carries an estimate of £300 to £500, and two pairs of bamboo shafted lances with red and white pennants, each commanding an estimate of £150 to £250 per pair.

And from the grounds of the house, a Georgian-style stone urn on a plinth standing at approximately 2.2 metres is expected to achieve £2,000 to £3,000, while a Haddonstone pedestal figure of Pan, standing at just under two metres tall, should sell for around £500 to £800.

The auction takes place on March 8.