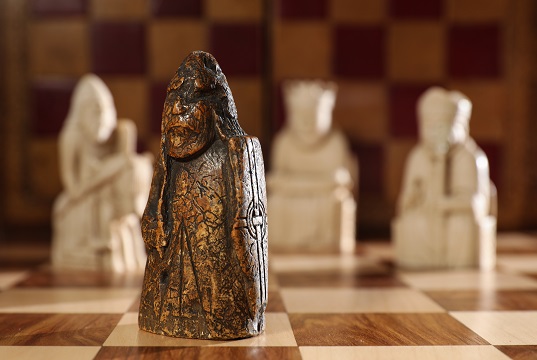 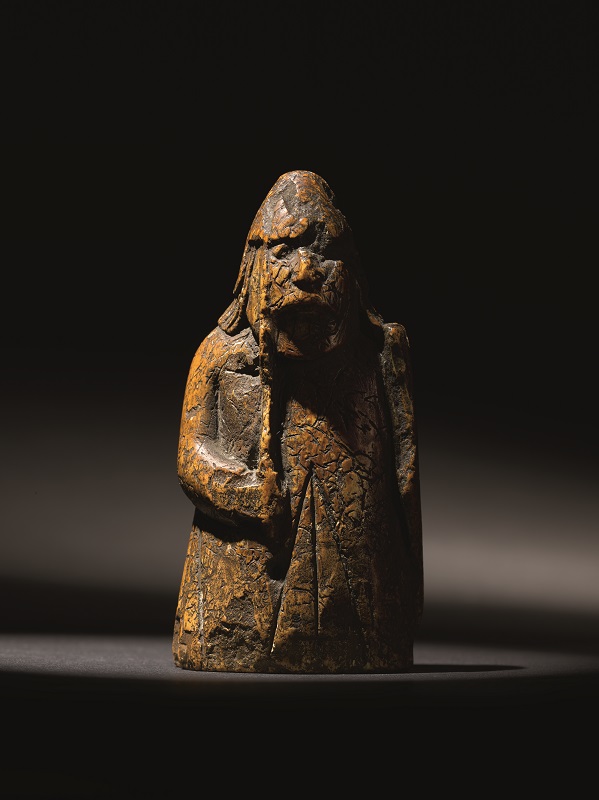 A rare medieval chess piece that was kept in the drawer of an Edinburgh family and has been ‘missing’ for almost 200 years could sell for £1 million.

The item is one of the long-lost Lewis Chessmen, which was bought by the family’s grandfather, an antiques dealer, for £5 in the 1960s.

Regarded as the most famous chess pieces to have survived from the medieval world, the Lewis Chessmen secured their place in history when they were found in 1831 on the Isle of Lewis in the Outer Hebrides. The remarkable hoard constituted the greatest ever discovery of  medieval chess pieces, and from the moment they were unearthed, the Lewis Chessmen evoked their own mysterious world, steeped in folklore, legend and the rich tradition of storytelling.

The hoard comprised 93 objects, the majority carved from walrus ivory, which could make four complete sets of figure pieces, with the exception of one Knight and four Warders. In addition to the 59 chessmen, there were 19 pawns and 14 flat, circular games pieces and one belt buckle (the only outsider in the hoard).

Of those 93 pieces, 82 are in the British Museum in London and 11 are in the collection of the National Museum of Scotland in Edinburgh, the whereabouts of the remaining five pieces unknown.

On July 2 in London, Sotheby’s will offer what appears to be the first additional piece from the Lewis hoard to have been discovered since 1831 in the Old Master Sculpture & Works of Art sale. Its appearance marks the first time that one of the chessmen has ever come up for sale at auction.

Alexander Kader, Sotheby’s Co-Worldwide Head of European Sculpture & Works of Art, said: “With fond memories from my childhood of the brilliantly animated television series that paid full tribute to the inspiration of the Lewis hoard, this is one of the most exciting and personal rediscoveries to have been made during my career. 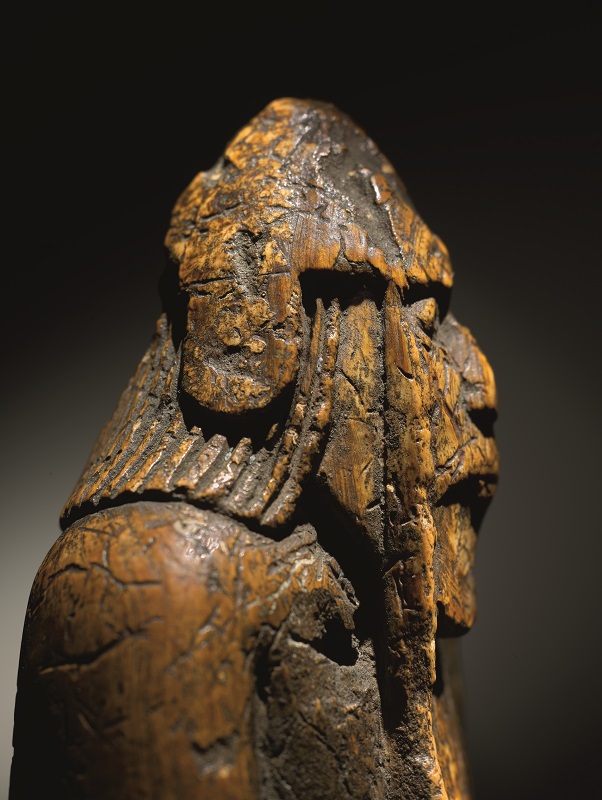 “Today all the chessmen are a pale ivory colour, but the new Lewis Warder’s dark tone clearly has the potential to offer valuable and fresh insight into how other Lewis chessmen may have looked in the past. There is certainly more to the story of this warder still to be told, about his life over the last 188 years since he was separated from his fellow chessmen, and just as interesting, about the next chapter in his journey now that he has been rediscovered.”

A family spokesperson said: “My grandfather was an antiques dealer based in Edinburgh, and in 1964 he purchased an ivory chessman from another Edinburgh dealer. It was catalogued in his purchase ledger that he had bought an ‘Antique Walrus Tusk Warrior Chessman’. From this description it can be assumed that he was unaware he had purchased an important historic artefact.

“It was stored away in his home and then when my grandfather died my mother inherited the chess piece. My mother was very fond of the Chessman as she admired its intricacy and quirkiness. She believed that it was special and thought perhaps it could even have had some magical significance. For many years it resided in a drawer in her home where it had been carefully wrapped in a small bag. From time to time, she would remove the chess piece from the drawer in order to appreciate its uniqueness.”

The Discovery of the Lewis Chessmen

The hoard was discovered on the Isle of Lewis, the westernmost of the Outer Hebrides. However, the exact spot and how remains a mystery. At some time just before April 1831 the hoard was unearthed, apparently in the sands of Uig Strand, an inlet in the north-west of the island, although a site a little further south on the same coast has been suggested.

Later accounts tell of a grazing cow accidentally revealing the chessmen. Fantastical folklore tales of ships moored in the bay, of a sailor swimming ashore clutching a bag, of murder and concealment of the hoard, of confession and a murderer hanged, all these conjectures appeared in later accounts of the find, which soon attained in the Scottish press and in legend the status of a ‘whodunnit’.

Just two years after the discovery of the hoard, David Laing, a fellow of the Society of Antiquaries of Scotland, observed in 1833, ‘it is evident, that to serve some purpose, contradictory statements were circulated by the  persons who discovered or afterward obtained possession of these Chessmen, regarding the place where the discovery was actually made’.

Early in 1831, the Lewis chessmen were shown to the Society of Antiquaries of Scotland in Edinburgh. At this time they still belonged to Roderick Pirie, a merchant of Stornoway, the capital of the Isle of Lewis.

Soon after, they fell into the hands of an Edinburgh dealer, T.A. Forrest, who paid £30 for them. Forrest sold 10 of the chessmen to a Scottish antiquary, Charles Kirkpatrick Sharpe. Having failed to sell the chessmen as a hoard in Scotland, he approached Frederic Madden, an enthusiastic chess player and Assistant Keeper of Manuscripts at the British Museum, to buy them for the museum, with the principal argument that such an important find must be kept together, despite that fact that he had already sold 10 pieces to Sharpe.

The late months of 1831 saw a period of political turmoil with popular riots across southern England and south Wales, not a good time to solicit funds to buy a hoard of ivory chessmen from Scotland. However, despite certain parliamentary opposition, and harnessed in his endeavours by a few of the British Museum’s Trustees, Madden was successful in bringing 81 of the Lewis Chessmen to the museum, for a sum of 80 guineas, a great deal of money at the time, and knocked down by Madden from 100 guineas. Aside from his original purchase, Sharpe was later able to buy another piece from an owner on Lewis, and it is these 11 pieces that make up the collection held by the National Museum of Scotland.

The Origins of the Lewis Chessmen

Scholars have proposed competing theories on the origins of the Lewis Chessmen, their style and iconography not restricted to one centre. The leading theory is that they are Norwegian, and more precisely probably from Trondheim, which seems to have specialised during the 12th and 13th centuries in carving gaming pieces, often from walrus ivory.

Trondheim was the seat of the archbishop of Norway, with the island of Lewis under its authority as part of the kingdom of Norway from early Viking times up to the Treaty of Perth in 1266. The theory that the Lewis hoard was the stock of a trader in chess pieces buried after a shipwreck was first proposed by Frederic Madden and has been the favoured explanation of their discovery ever since. The good condition of the individual pieces and their apparent lack of wear supports the theory that they were the stock of a trader in chessmen that never reached their market.

The Importance of the Lewis Chessmen

Recognised as an important symbol of European civilisation, the Lewis Chessmen were included by Neil Macgregor, former director of the British Museum, in his BBC Radio 4 series, A History of the World in 100 Objects. He commented that ‘if we want to visualise European society around the year 1200, we could hardly do better than look at how they play chess. And no chess pieces offer richer insights than the… Lewis Chessmen’.

This notion was equally understood at the time the Lewis Chessmen were made, as evidenced in a 13th-century Communiloquium written by the Franciscan, John of Wales: ‘The whole world is like a chessboard, of which one square is white and another black, following the dual state of life and death, praise and blame. The society (familia) of this chessboard are men of this world, who are all taken from a common bag, and placed in different part of this world, and as individuals have different names. One is called king, another queen, a third rook, a fourth knight, a fifth alphin [bishop], a sixth pawn’.

The Lewis Chessmen are remarkable in that the survival of each one of the familia allows us insights into the  characters of each individual with incomparable vividness, imagining their strengths and vulnerabilities. Through dress and gesture, it becomes possible to read the social hierarchy within the group.

The warders that made up the hoard are of two types: the majority are bearded with a sword in their right hand and shields either at their left side or in front, and three are shown biting the tops of their shields, identifying them as the legendary Norse warriors known as berserkers. The new Lewis Warder is completely consistent not only with his fellow warders but also with the surviving group as a whole.