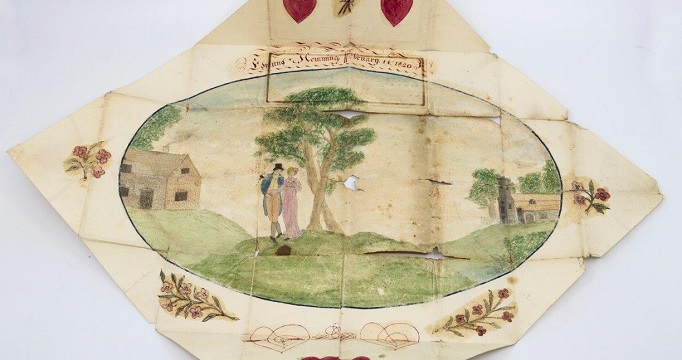 A rare antique Valentine card from 1820, found during a house clearance, has revealed an image of the sweethearts who shared it nearly 200 years ago – and a sad love story.

The Valentine, called a love token or puzzle purse, opens out to show a watercolour painting of a young couple arm-in-arm wearing Regency fashions reminiscent of the Jane Austen era. 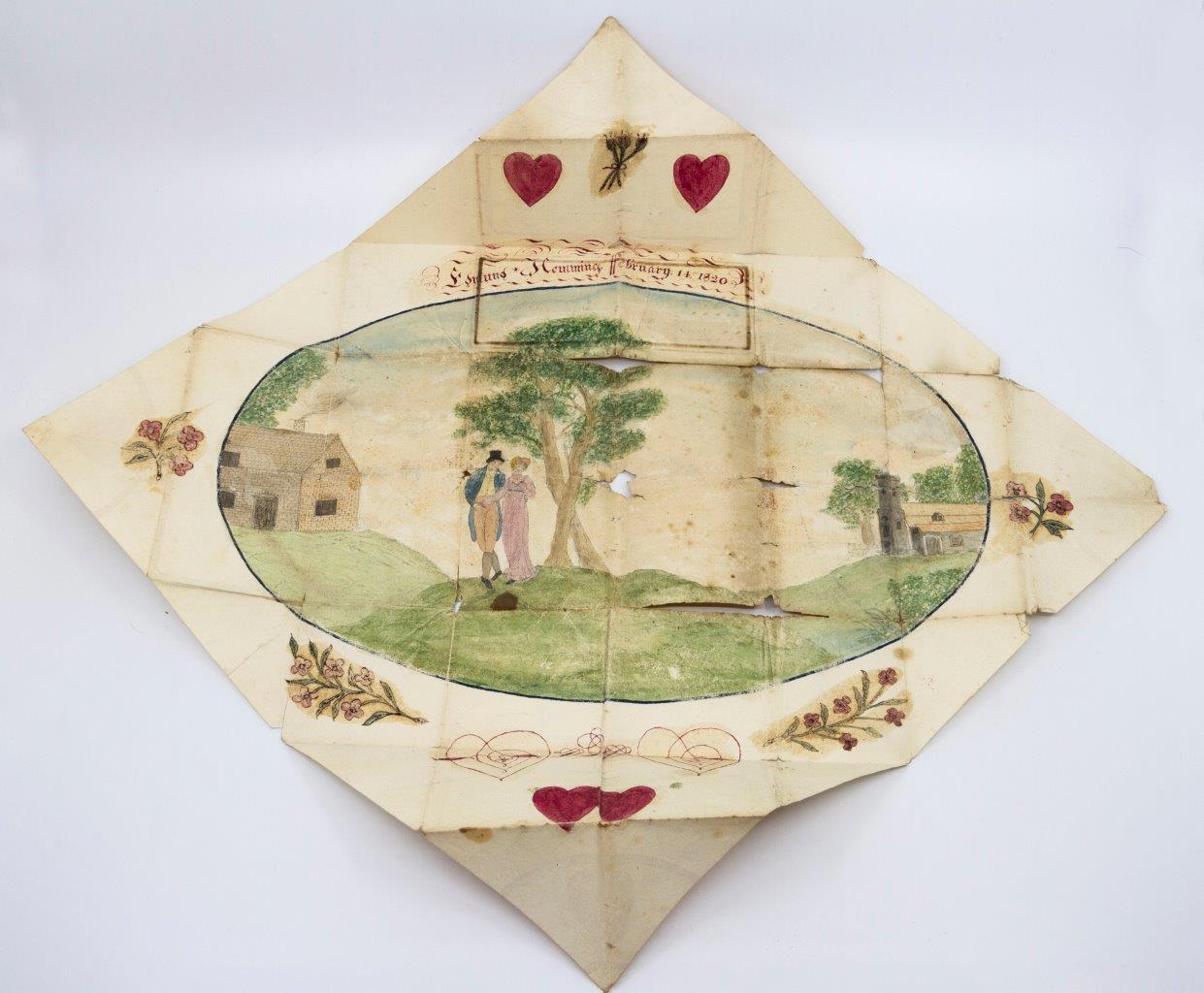 But, though brimming with romance, the card has unearthed a sad tale of unrequited love. Historical research carried out by its owner, Amy Walker, has revealed that the couple never married and it’s thought that Ann died a few years after the card was sent to her.

Amy, 41, a project officer from Falmouth, Cornwall, said: “The card belonged to my great aunt Grace Collins who was born in Bexley, Kent, in 1909, orphaned by 1915 and entered domestic service as a housemaid. 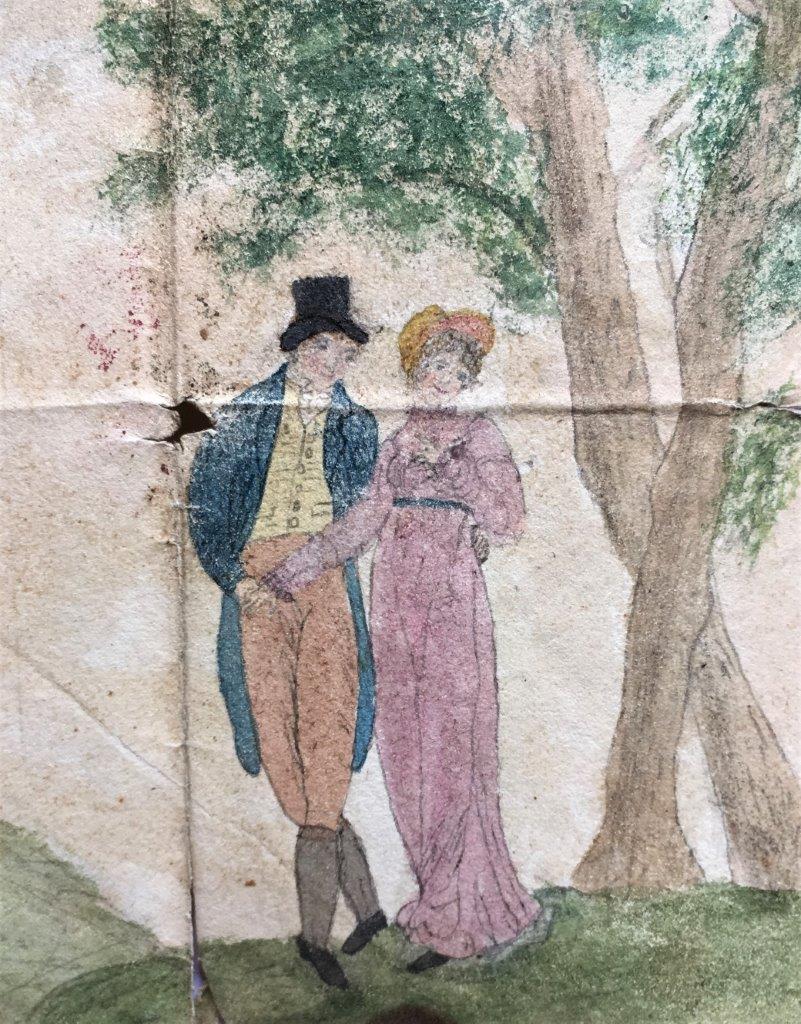 “We don’t quite know how she ended up with the antique Valentine. She didn’t have much. I think she probably came across the card and kept it because it was such a beautiful thing.

“Grace spent most of her life in the village of Broadway in Worcestershire.  She married and worked for furniture business Gordon Russell, staying on well beyond normal retirement age.

“She lived in a tiny council house and, when she died at the age of 90 in 1999, our family were asked to clear it with some urgency. Grace’s things were hurriedly packed into a shoebox and put away in a cupboard.

“It was only last year when I was doing some family research that I started looking through her papers, opened the shoebox and rediscovered the beautiful Valentine among some old family photos.

“I was fascinated. The young couple on the card aren’t connected to my family. I wanted to know who they were. Edmund was born in 1795 in Salford Priors, Warwickshire. Ann is a bit more of a mystery but an Ann Wilkes was born in 1800 in Bidford-on-Avon.  Wilkes was a common name in Warwickshire at the time, but I think Ann married another man, Thomas, in 1821 – the year after the Valentine was sent – and died five years later in 1826.

“Edmund married Elizabeth Millington in 1830, had 10 children and became a maker, joiner and carpenter with one employee and an apprentice. He did pretty well for himself. Perhaps Ann made the wrong choice. At that time many people were illiterate but Edmund’s Valentine proved he was intelligent as well as romantic.”

As well as the watercolour image of the young couple, the Valentine features hand-drawn love hearts, love birds and romantic verse, such as: ‘On you depends my future peace, One kindest look one tender sign, Shall bid my every trouble cease, Come then and be my Valentine‘… ‘With you enraptured I should share, The pleasures and the ills of life, And make it my continual care, To render you the happiest wife‘. 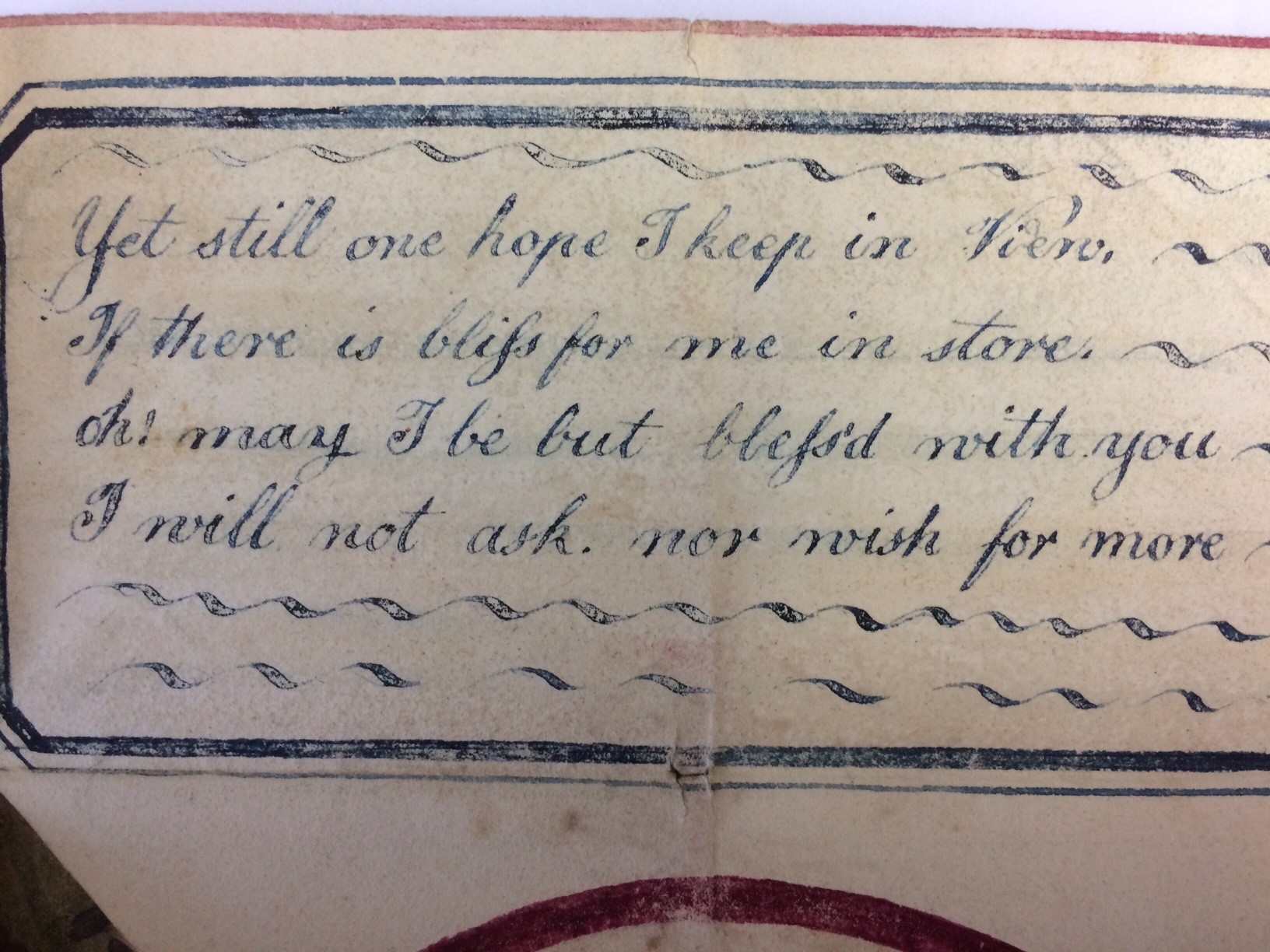 Jim Spencer, works on paper expert at Hansons, said: “It’s a wonderfully romantic card, akin to a proposal of marriage. Edmund wore his heart on his sleeve. He clearly wanted to marry Ann. Sadly, he never got the girl.

“Given the nation’s affection for Jane Austen and the popularity of antique Valentine cards among collectors, I think this card could break a few buyers’ hearts in the battle to own it.”