Love and marriage have influenced antiques for centuries. To celebrate Valentine’s Day, we put some timeless designs in the spotlight. 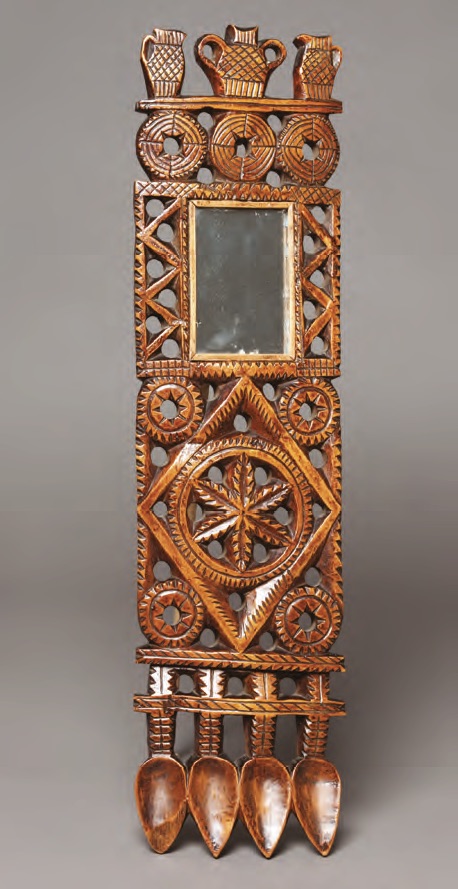 For the lovelorn Welsh maiden nothing was as thrilling as the presentation of a carved spoon from a would-be suitor. Not only did it show a loving interest, it proved her potential husband was no slouch in the woodworking department. Lovespoons are not confined to Wales – they are also found in Celtic Breton and Scandinavia where their intention varied from ‘feeler’ spoons (sent to many girls to gauge who was the keenest) to ‘suitor’ spoons, carried in the carver’s breast pocket to show he was ‘going steady’ with a girl. (Swedes even gave out ‘jokespoons’ at weddings which were comically misshapen to make eating by inebriated guests very difficult).

Compared to the elaborate decoration of their Welsh counterparts, Scandinavian spoons tended to be relatively conservative, although the heart was generally present somewhere in the design as it was universally recognised as the symbol of love and affection.

In Welsh circles the acceptance of the spoon didn’t necessarily signal anything more than mutual interest, with a sizeable collection seen as an indication of a girl’s desirability. 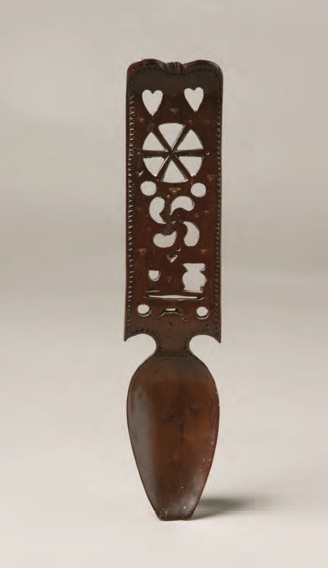 The oldest Welsh lovespoon is in the collection of the National Museum of Wales and dates to 1667. Like their Scandanavian counterparts spoons were shaped with great care and devotion with the calibre of the spoons testimony to the makers’ skill and devotion.

Welsh carvers used a wide range of of symbols in an eclectic range of styles. Styles, ranging from simple panel spoons to chainlink and balls-in-cages crowned by ornate swivels and anchors carved from close-grain woods, such as sycamore, box and fruit woods, were particularly popular. Welsh country furniture and folk art specialist Tim Bowen, said: “The balls-in-cages demonstrated the consummate skill of the maker as the balls had to be carved from the solid wood not just placed in the cage.”

While few documented records exist, there is no evidence that the acceptance of a spoon constituted an engagement. More likely it gave the young man a green light to initiate a relationship.

Generally considered to indicate loyalty and faithfulness. Chain links might also symbolise a couple bound together in love and loyalty.

Diamonds are believed to represent a wish for prosperity and good fortune and a promise to provide well for a partner.

In addition to the house images that sometimes appear on Welsh lovespoons appearing to represent domestic contentment, key and keyhole carvings are also used frequently, perhaps symbolising security or, more romantically, the key to one’s heart.

Wheels are thought to represent a vow by the carver to work hard and provide for his spouse and family. 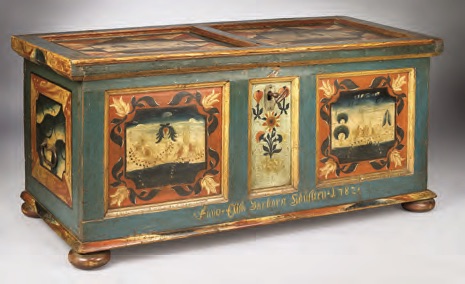 One of the quintessential items of peasant furniture, especially in Europe, is the colourful folk-painted antique pine box, coffer, trunk or chest. While popular abroad, the style is less familiar in the UK. Dealer John Cornall said: “If highly decorated chests were not found in the British Isles it is partly because we had different marriage traditions from our European neighbours and also because of the iconoclasm, or anti-festive turn, that our visual traditions took from the time of the English Revolution in the 17th century.”

In Wales and in the rest of British Isles, the custom for country people, was to present a dresser, or sideboard, for use and display in the front room or tidy room. The dresser would then display the home’s best crockery, with a set of rarely used silver cutlery in the drawer, both of which had been wedding gifts. 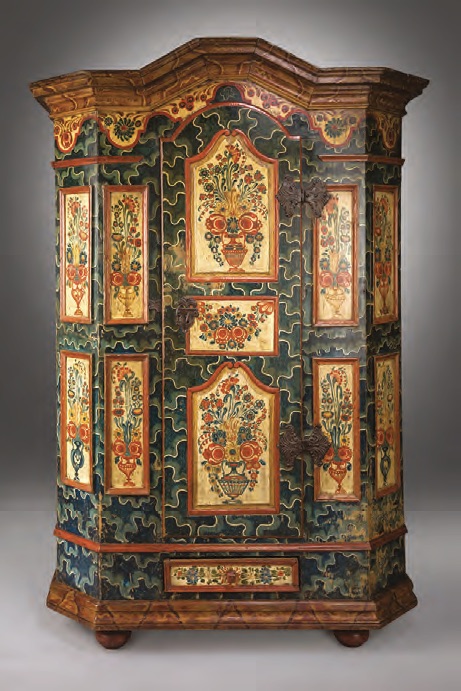 Growing in popularity today, the boxes are especially sought after by interior designers, modern art galleries and textile collectors, as the designs were often based on traditional bridal dress.

When originally presented, the boxes were often accompanied by other similarly decorated pieces of furniture, whose role was similar, such as an armoire, or a chest of drawers, or a painted dresser and also by smaller items like a spoon or plate rack.

Often made in local workshops, the marriage chests were ornate affairs designed to be on show during the wedding procession. Many were inscribed with a date and the couple’s initials and it is not uncommon for one box to be painted over when it was handed down to the next generation. John continued: “In the Harta region of Hungary and in the Kaloteszeg (now in Romania) a set of furniture was painted in the region’s typical colours, with the same colours, flowers and patterns woven into the bride and groom’s clothing, so, too, the blankets that bedecked the wagon.”

Marriage Chests – What to Look For

Some of the best wedding chest come from Germany and Sweden, which were finely made and well crafted with bold mouldings and panels. Mostly made of widely available pine, the humbleness of the wood was often disguised with a wood grain effect to imitate darker more expensive wood.

Each area or region boasted its own style, patterns, colour and symbols, ranging from religious symbols promoting piety and fidelity to flowers and birds each of which had a different significance.

Hungarians often call marriage chests ‘tulip boxes’ because of their flower motif borrowed from Eastern Europe and the tulip mania of the Netherlands. While the flower found its way into painting and decorative art of the Baroque, in the multi-ethnic outlands of the Hapsburg Empire, it came to represent tribal identity and solidarity.

John said: “When I put the boxes on the internet I am sometimes contacted by people in Eastern Europe who recognise the style and even know the workshops they came from.”

Boxes from Scandinavia are much sought after by collectors as being well built, although Swedish and Norwegian boxes were invariably made with domed lids that is a deterrent to buyers as it limits use in the home, he added. 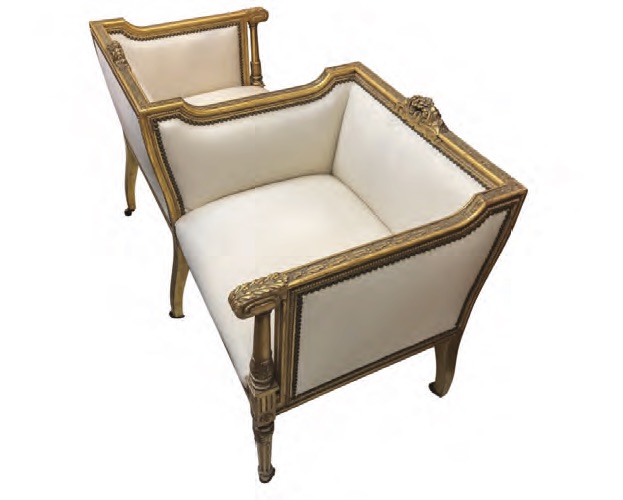 Another furniture style with distinct romantic connotations is the ‘love seat’ – provoking images of seated young lovers whispering sweet nothings to one another at country house gatherings. It can, however, be more widely used to describe a broader variety of seating styles, encompassing everything from S-shaped sofas, upholstered in deeply-buttoned leather; to simple benches constructed in wood, as well as the familiar two-seater sofa commonly found in homes today.

The origins of the design reach back to the 17th century when the voluminous fashions worn by women, incorporating layers of petticoats, underskirts and hoops, meant that the standard one-seat chair failed to offer the necessary width. As such, ladies would often be seated in wider, un-upholstered wooden seats. 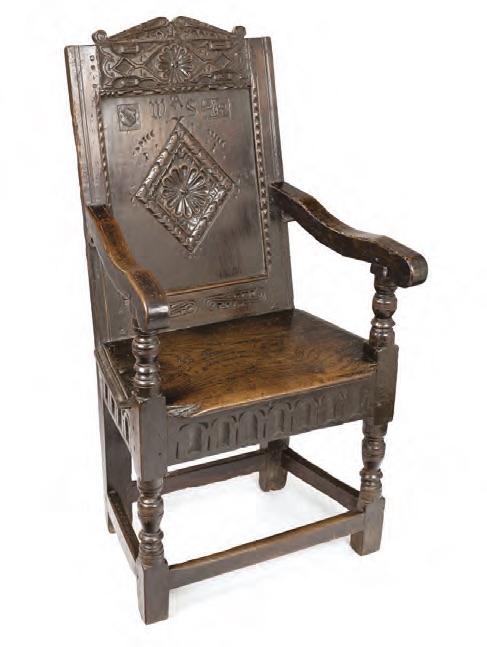 The era also saw chairs that celebrated the marital union of a well-to-do couple. One such celebrated example was offered at auction in a Christie’s sale during 2002, engraved with the coat of arms of William Shakespeare and bearing the initials ‘WAS’ (supposedly denoting William and Anne Shakespeare). Bought by the Shakespeare Birthplace Trust for £1,800, the alleged ‘Shakespeare’s courting chair’ is now on display in Anne Hathaway’s Cottage in Stratford-Upon-Avon, Warwickshire.

Over the next two centuries, as female fashions evolved to favour more form-fitting gowns, wider seats still retained favour due to the extra space they offered sitters. Two-seater and three-seater settees also grew in popularity during the 18th century, popularised by the designs of such figures as the eminent architect and furniture designer, William Kent. Sir Robert Walpole commissioned Kent to design a settee as part of a suite, constructed in mahogany and 24-carat gilding, for his salon at Houghton Hall.

These two-seater ‘chairs’ were also deemed acceptable meeting places for budding lovers who had to adhere to the strict moral codes of the period. Seated in such close proximity, they could engage in quiet conversation and courtship, without incurring the disapprobation of their elders for indecency.

By the beginning of the 19th century, chairs of this width and style were being crafted and given the romanticised name of love seats or courting chairs. However, many examples were still constructed with two sections to symbolically emphasise their duality of purpose.

Meanwhile in France, by the middle of the century, another version of the love seat gained popularity: the boudeuse. A small, upholstered sofa, the boudeuse was constructed in such a way that the two sitters faced in opposite directions, leaning against a shared central back. This type of seat was also referred to as the dos-àdos, which translates as ‘back-to-back’.

By the late 19th century, as the Industrial Revolution changed the social landscape of Britain, upholstered two-seater chairs and sofas were increasingly common in homes of all classes. 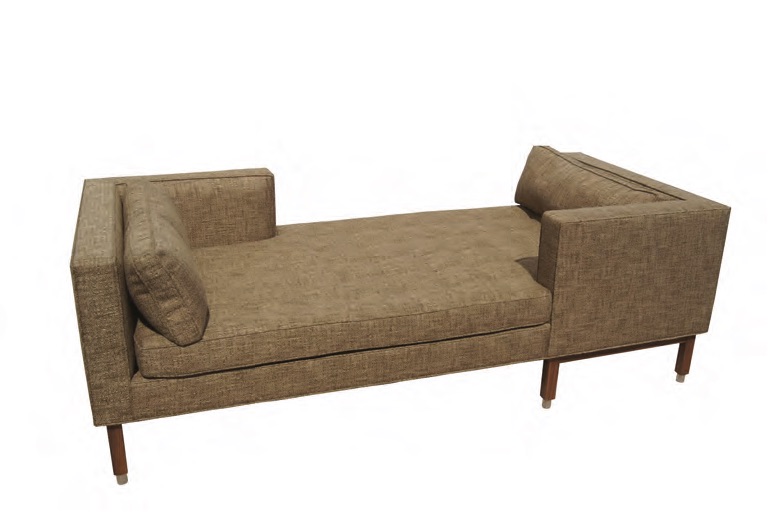 A tête-à-tête refers to a unique piece of opulent French furniture which emerged in the 19th century, with the name (which translates as head-to-head) accurately describing the early functionality of these seats during the Victorian era.

Similar to the classic head-to-head chair style, tête-à-tête sofas feature backrests which are curved to face one another. Think of it as a modern chaise lounge but with a backrest on each side instead of a single backrest. This allows both individuals to have a backrest but still engage face-to-face.

The tête-à-tête concept evolved from its Victorian beginnings to effectively become a settee chair. Although the majority of pieces feature the standard S-shaped backrest, there is seemingly no end to the variety of designs. The style was revived by a number of mid-century designers, including the American modernist Edward Wormley.