A Cotswolds auction house is hoping that a large, 19th-century pottery pig by the Scottish pottery Wemyss will bring home the bacon in its next sale, with hopes it could fetch between £3,000 and £5,000. 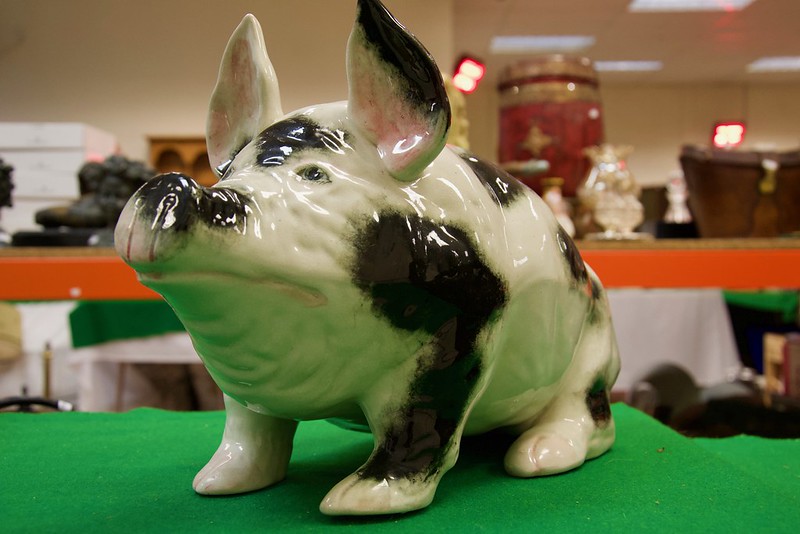 The white porker with black patches measures 42cm from its snout to the tip of its curly tail. Pigs were a favourite subject of Wemyss’ Czech head decorator Karel Nekola in the 19th century, and became something of a signature for the Fife-based business.

The figure is the standout lot amongst a collection of Wemyss pottery, which also includes a rare chrysanthemum-decorated bowl (estimate £150 to £200) and a large mug produced to celebrate the diamond jubilee of Queen Victoria in 1897. The mugs were available with either pink or blue bows. This one – with blue bow design – carries a £150 to £200 estimate at Moore Allen & Innocent auctioneers.

From pottery to glassware, pieces by the French glass designer René Lalique never fail to attract bidders. Among the best are a circa 1932 biches vase, decorated with deer in a woodland setting, which commands an estimate of £300 to £500, and a circa 1923 grey and blue-tinted esterel vase, which is expected to achieve between £600 and £800.

Although both Wemyss and Lalique were established in the late 19th century, their fortunes continued into the 1900s and beyond – in fact both are still manufacturing today.

And 20th century antiques is the theme of the auction – to be held at Moore Allen & Innocent in Cirencester on Wednesday, February 19 – with furniture and art both well represented. 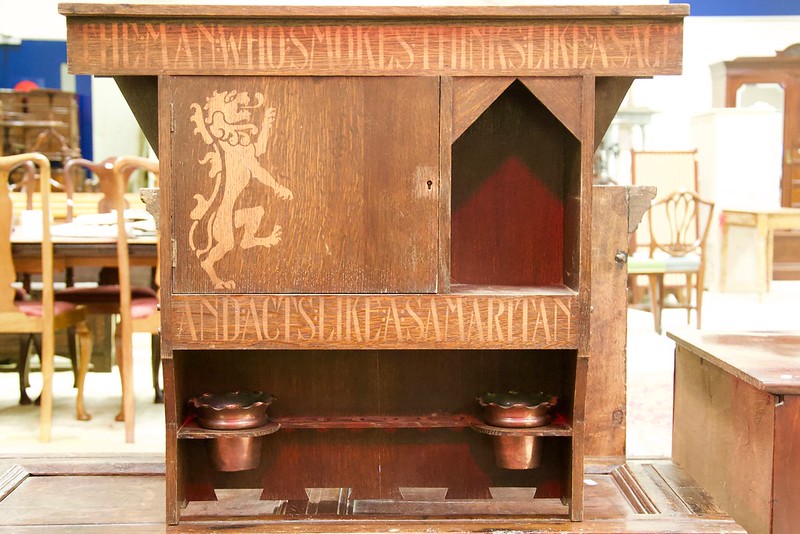 In the furniture section, an unfussy William Morris & Co chest of drawers carries an estimate of £200 to £300, while a pair of Gordon Russell post-war sideboards are estimated at £80 to £120.

They will be vying for attention with another piece of Arts & Crafts furniture: an oak wallhanging Liberty & Co smokers’ cabinet. Sold in or around 1910, the friezes are stencilled with the phrase ‘The man who smokes thinks like a sage and acts like a Samaritan,’ while the cupboard door is decorated with a rampant lion. A shelf below is designed for hanging pipes, and there are two copper vessels for smoking pieces, while the top of the cabinet bears the Liberty & Co label. It carries an estimate of £50 to £80.

Finally, following its success in selling a set of images of the Cottingley Fairies, Moore Allen & Innocent has more from what has been described as the first, and one of the most audacious, photographic hoaxes. When images first surfaced in 1917 of cousins Elsie Wright and Frances Griffiths playing with fairies in the garden of a house in the Yorkshire village of Cottingley they caused a sensation. What is obvious to us now – that the fairies were merely paper cut-outs, held up with string and hair clips – was not so obvious to followers of the spiritualist movement. Sherlock Holmes creator Sir Arthur Conan Doyle was one of those taken in. Prints of the photographs were produced for sale at meetings of the Theosophical Society, and this collection features an A5-sized copy of the most well-known of the images, ‘Alice and the Fairies’ along with a set of postcard prints of all five images from the series. Bids of £1,000 to £1,500 are expected.