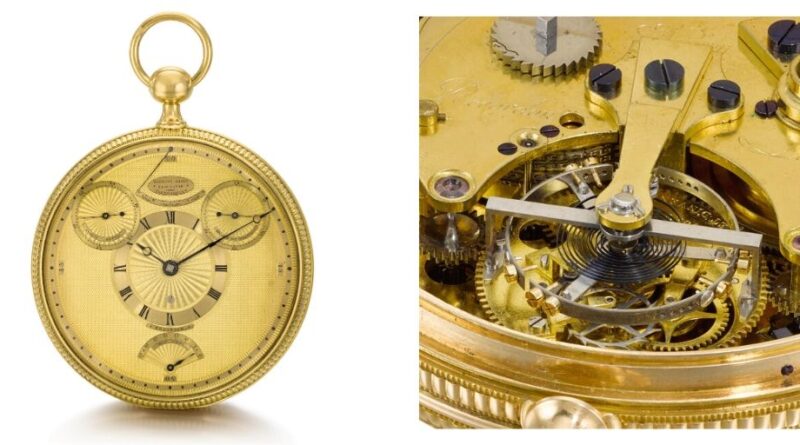 A watch created for King George III by the 18th/19th-century watchmaking genius Abraham-Louis Breguet (1747-1823) could make a million pounds in an upcoming sale at Sotheby’s next month.

Breguet rose to prominence through making accurate time portable thanks to his revolutionary invention: The Tourbillon. He was also a “celebrity watchmaker” whose creations were sought after by all the crowned heads of Europe, from Marie Antoinette and the King of Spain to Napoleon and Tsar Alexander I. 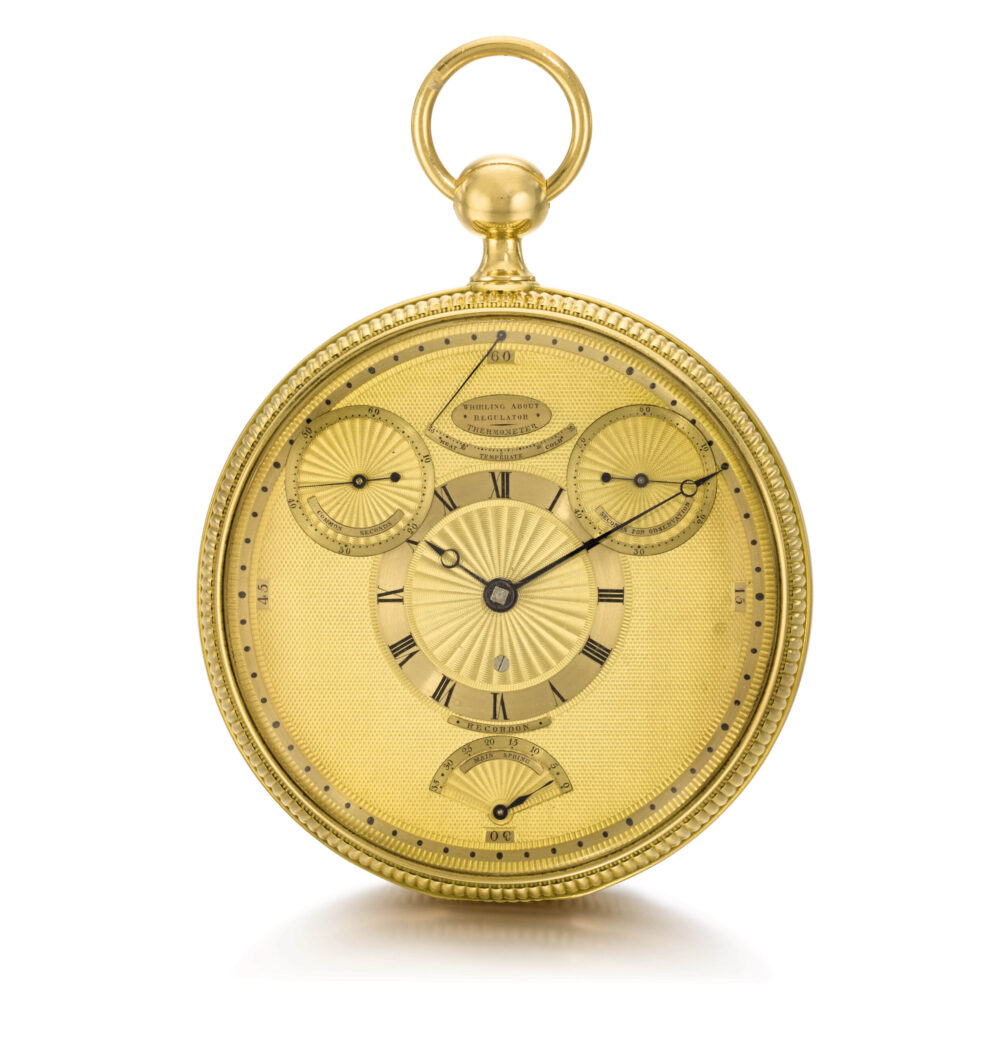 Discreetly sold to King George III in 1808, in the midst of the Napoleonic Wars, a gold four-minute tourbillon watch will be offered as part of a single-owner auction in London on July 14, with an estimate of £700,000 to 1 million. The sale entitled The Collection of a Connoisseur will also feature horological treasures and the ingenious and whimsical automata created in Geneva at the turn of the 19th century.

Engraved with King George III’s royal cypher and the letters G & R, the watch is most probably the first tourbillon Breguet sold commercially and is groundbreaking from many points of view.

An avid supporter of the sciences, deeply involved in the greatest scientific debate of his time – the longitude problem, King George III (1738-1820) was also passionate about horology and assembled a remarkable collection of clocks and watches. This passion led the king to brave the blockade isolating Britain from the rest of Europe in the midst of the Napoleonic Wars (1803-1815) to purchase what was then considered cutting-edge technology. 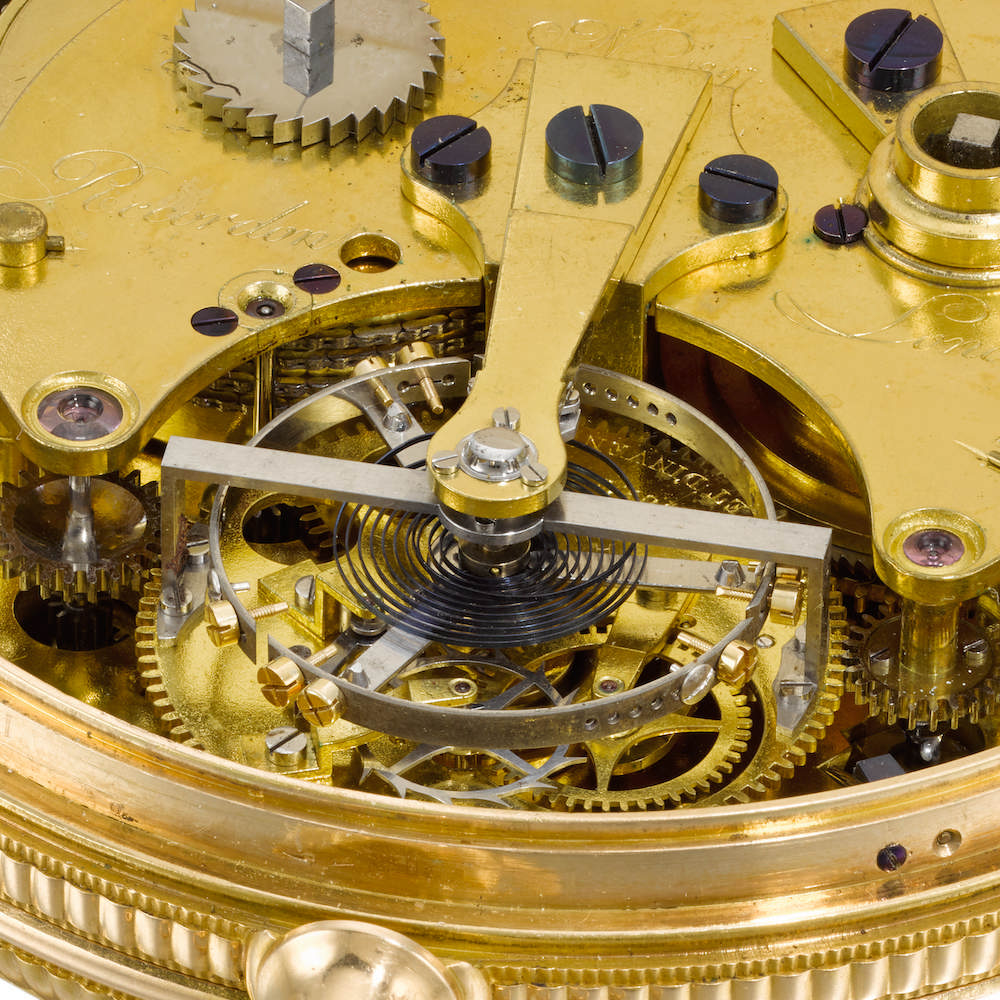 For King George III to purchase a French watch during this period would have seemed unthinkable. To prevent the chance of its seizure, the watch appeared from the outside to be unsigned: Breguet only signed the tourbillon carriage inside the watch. The piece – recorded as No. 1297 in Breguet’s archives – was sent to Recordon, Breguet’s London agent for the King on June 29, 1808 and sold for FF 4,800, a huge sum at the time. George III actually never fully paid for the watch. The Georgian Papers archive contains a bill ‘reminder’ from 1812 which is addressed to the Prince Regent and lists four Breguet pieces for which payments remain outstanding. The first in the list is no. 1297.

The watch created a sensation when it appeared for sale at Sotheby’s from a private collection in November 1999, selling for £551,500. At the time, the watch had not been seen in public since its inclusion in the 1955 exhibition “Five Centuries of Timekeeping” at Goldsmiths’ Hall in London. Carefully stored since 1999, the watch has survived in extraordinarily original condition.

Daryn Schnipper, Worldwide Chairman of Sotheby’s Watch Division, said: “Abraham Louis-Breguet watches were the theory of everything in the early 19th century, incorporating all the scientific discoveries of the past centuries, the philosophy of the Enlightenment and the great vision of a man who revolutionised watchmaking and placed time and precision at the core of modern society. When you hold the watch he made for George III, you instantly know you are in the presence of something truly exceptional.”

He continued: “This watch not only captures Breguet’s genius – the ability to conceal layers of complexity behind apparent simplicity – it also encapsulates why historic timepieces are so relevant today. They transcend the function of mere timekeeping to tell us the history of the modern world. This notion was the driving force for the connoisseur who owned this watch: he painstakingly assembled one of the finest collections of horological treasures, whimsical automata, objects of vertu and unpublished letters by the great visionaries of modern history.”

Next month’s auction will also feature very rare automaton pieces made at the turn of the 19th century. These expensive novelties invented for the far-away markets of China, India and the Ottoman Empire were not only technical masterpieces, so well-made that they are still working today, but also were enclosed in cases of the finest gold, jewelled, enamelled and painted by the best artists.

Geneva was able to furnish masters of all these skills at a time when Paris, previously the arbiter of luxury fashion, was otherwise occupied with revolution, wars and homage to a conquering Emperor.

The most complicated and sophisticated mechanisms are those contained within the extremely rare ‘Temple’ snuff box made in 1807-1808 by the Geneva goldsmith Phillipe Sené and Henri Neisser for the Chinese market, estimated at £500,000-700,000.

A Rochat Frères singing bird watch, created for the Turkish market and contained within a superbly decorated gold and enamel case, has an estimate of £400,000-600,000 in the sale.