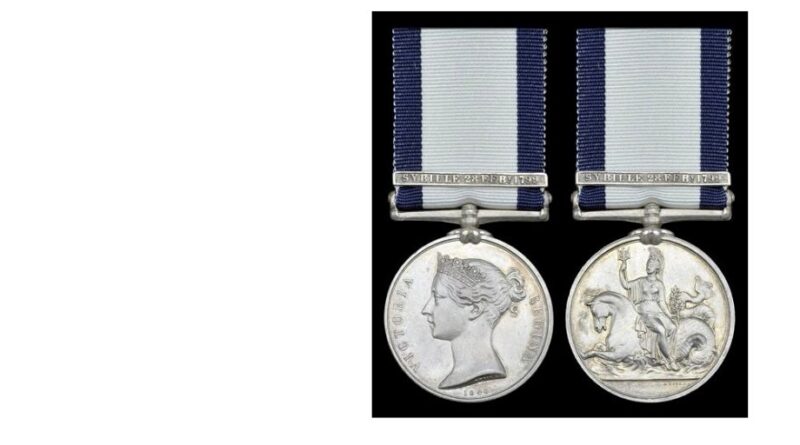 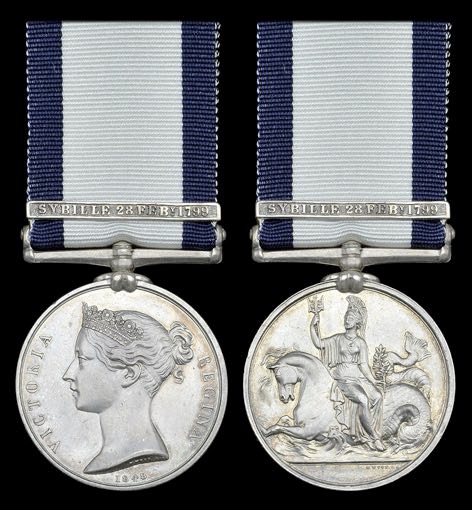 Two medals from the collection achieved the two highest prices of the sale. A very rare 2-clasp naval General Service Medal awarded to Carpenter Archibald Gray, who was on board the Arrow sloop on the occasion of her formidable defence on February 3, 1805; realised £39,680 – double its pre-sale estimate of £14,000-18,000. A very fine 1 clasp from Sybille dating from February 28, 1799 (Samuel Butler) fetched £27,280 against an estimate of £16,000-20,000. Both were bought by private collectors.

Also of note was the superb Great War 1916 ‘High Wood’ M.C., ‘Life Saving’ A.M. group of seven awarded to Captain W. L. C. Rathbone, 15th Battalion, London Regiment (Civil Service Rifles), formerly Devonshire Regiment, who was awarded the Albert Medal for great gallantly in disarming a ‘madman’ who had run amok in a trench carrying a loaded rifle with fixed bayonet. They sold for £19,840, against an estimate of £8,000-12,000.

The rare Second War D.S.O., D.F.C., D.F.M. group of seven awarded to Flight Lieutenant R.J. Cook, Royal Air Force Volunteer Reserve, who as an observer with 15 Squadron and took part in numerous sorties against targets in France and Germany in 1941 and then was captain of the ill fated ‘Star Dust’ Avro Lancastrian airliner that disappeared without trace on a flight between Buenos Aires and Santiago in 1947. The wreckage of his aircraft was only discovered in 1998. It was being sold by Cook’s family and fetched £16,120 against an estimate of £12,000-15,000. It was bought by a collector.

An outstanding and rare Great War ‘Western Front’ Lovat’s Scouts ‘sharpshooters’ M.C., 1919 ‘Archangel’ D.C.M. and M.M. group of eleven awarded to Lieutenant-Colonel J. Whammond fetched £16,120 against an estimate of £8,000-12,000. It was bought by a collector. Whammond was a Scot who served in the Boer War with the Cape Mounted Police, and during the 1914-15 campaign in German South West Africa as a Regimental Sergeant Major in the South African Mounted Rifles, before being commissioned into Lovat’s Scouts. Resigning his Commission in 1919, he volunteered for service in the ranks of the 46th Battalion, Royal Fusiliers, winning his last two awards for gallantry in North Russia, August to September 1919.

Dix Noonan Webb are donating 5% of their Buyer’s Premium to NHS Charities Together, and a total of £37,355 is being donated to the charity from the auctions since the lockdown due to COVID-19.