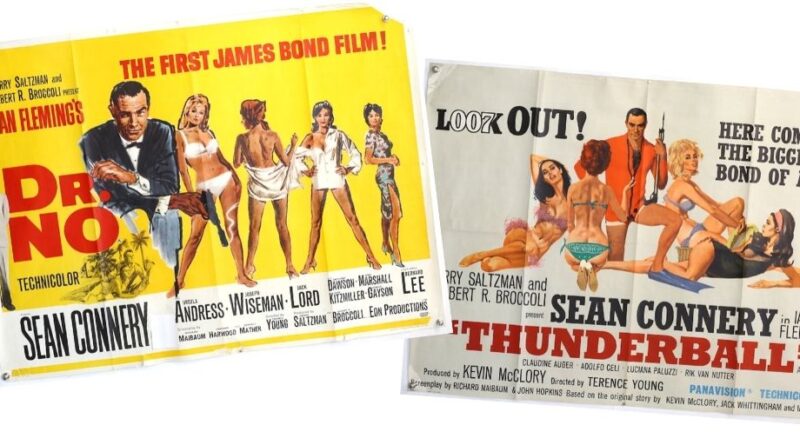 Rare James Bond film posters could make thousands when they go under the hammer next month at Ewbank’s, Surrey’s entertainment memorabilia auction house.

A British quad poster advertising the first-ever Bond film, Dr No, released in 1962 and starring Sean Connery, is expected to sell for between £4,000 and £6,000.

Another Bond poster, this time for the 1965 film Thunderball, also featuring Connery in the title role, has a pre-sale guide price of between £2,000 and £4,000.

James Bond is one of the most popular of the film franchises, and memorabilia connected to it consistently realises high final sale prices among movie buffs. Star Wars memorabilia is also, unsurprisingly, incredibly sought after by collectors.

The sale taking place on August 21 features an unusual Star Wars poster which will be sure to pique buyers’ interest.

An original dated US one-sheet teaser poster launched in advance of the release of the 1982 film Star Wars: Return of the Jedi has a guide price of between £400 and £600. However, this poster features the original title for the film, Revenge of the Jedi, before it was switched to Return of the Jedi on its release, giving it an extra element of collectability.

Another US one-sheet Star Wars poster, this time for the original first Star Wars movie, released in 1977, is also on sale. Featuring artwork by Tom Jung, the poster is style A and is produced on the third print run. It has been valued at between £300 and £500.

Other lots of note include a US one-sheet poster advertising the 1964 Stanley Kubrick film Dr. Strangelove or: How I Learned to Stop Worrying and Love the Bomb. It is folded and has a guide price of between £300 and £500.

A poster for the 1966 film Carry On Cowboy, featuring artwork by noted poster artist Tom Chantrell has an estimate of between £300 and £500.

A poster for the 1967 Sergio Leone western, For A Few Dollars More, starring Clint Eastwood, has been valued at between £150 and £250; and a British quad poster for the cult horror film An American Werewolf in London, has a guide price of between £80 and £120.