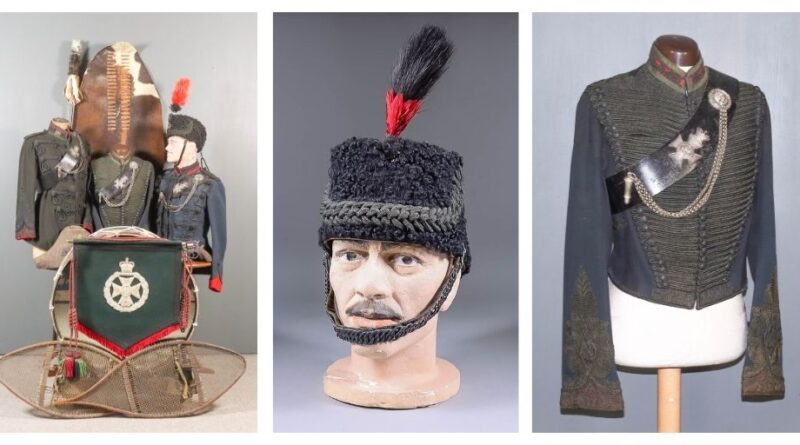 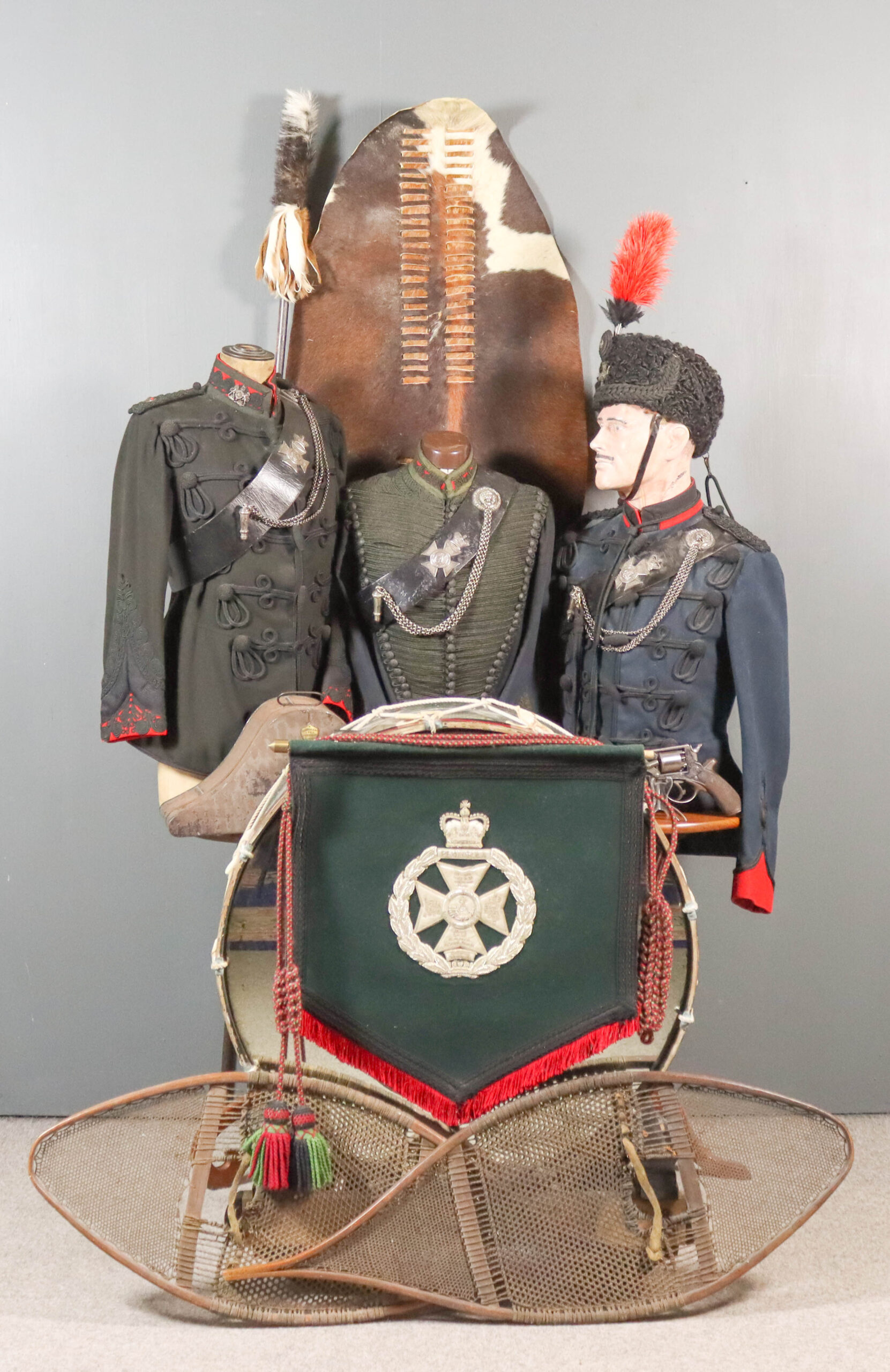 Collected by a former corps bandsman, the items will be sold over a two-day weekend military sale at the Canterbury Auction Galleries on August 1 and 2.

They comprise now extremely scarce surviving items of uniform, many of which are identified as having been form by high-ranking officers; rare belt plates, cap badges and insignia; dress swords; items relating to the Zulu and Boer Wars in general and General Sir Redvers Buller VC in particular; and dozens of other memorabilia and ephemera relating to the Rifles and the Green Jackets following their amalgamation in 1966. Estimates are affordable, making the sale particularly attractive to other collectors.

The man who amassed the collection explained: “My passion for researching and collecting Rifles memorabilia stems from memories of serving in the Kings Royal Rifle Corps and the excitement of marching with the band at a rapid 140 paces to the minute whilst playing a French horn, causing mayhem to the tick-tock pace of other regiments on parade.”

Dave Parker, managing director of The Canterbury Auction Galleries and the saleroom’s militaria specialist was in no doubt of the collection’s significance. “In my opinion this is the finest group of objects relating to the King’s Royal Rifle Corps as you are ever likely to see outside of a regimental museum and we expect a great deal of interest from collectors and institutions alike.”

Buller was awarded his Victoria Cross for his gallantry in rescuing two officers and a trooper of the Frontier Light Horse in three separate incidents whilst being pursued by Zulus during the retreat at Inhlobana on March 20, 1879. The heroics are recalled in a modern limited edition Ballantynes hand-painted metal model showing Buller CB, 60th The Kings Royal Rifle Corps, pulling Captain D’Arcy onto his horse behind him. It has an estimate of £80-120.

Buller, a national hero, also figured in commemorative ceramics. A Staffordshire flatback figure, wall plaque and a small porcelain cream jug are estimated at £80-120, and an autographed photograph and lithographs also feature, estimated at £100-160, but most important is the possibly unique metal case for his cocked hat, with his name inscribed on a brass plate, which carries an estimate of £200-300.

Early uniforms rarely survive the passage of time, but the collection includes among many others a King’s Royal Rifle Corps cavalry style jacket, circa 1830-1854, elaborately decorated with lace to the cuffs, rear and shoulders, complete with a contemporary cross belt, denoting a high ranking officer. It has an estimate of £800-1,200. A full dress tunic issued to a major of the Reserve during the Boer War, circa 1900-1901, with royal coat of arms to its collar, again with black leather cross belt with silver boss, whistle and holder is estimated at £600-800.

Fully provenanced uniforms are a major feature of the collection with garments worn by such individuals as Major G. C. Shakerley D.S.O, who served in the Somali campaign against the ‘Mad Mullah’, and Lord Bramall, KG. GCB. OBE. MC. JP. DL (1923-2019), the latter with a letter of provenance from Major K. Gray, Keeper of the Archives at the Royal Green Jackets (Rifles) Museum. They are east estimated at £200-300.

An example of the Corps’ distinctive lambswool busby with red vulture feathers and black horsehair plume and chin scale, estimated at£100-150, is accompanied by a number of tin containers, some named and complete with busby, estimated at £200-300, some vacant and carrying estimates of £80-120.

Other highlights in the sale include:

The unusually large militaria section of the two-day sale also includes a single-owner collection of 19th century and earlier firearms, which follows the evolution of the firearm.

Pick of this second collection, consigned by the executors of a Kent deceased estate, is fine 19th century .44 calibre six-shot percussion pistol by the Irish maker Rigby of Dublin. The pistol has a six-inch blued steel hexagonal barrel with maker’s name engraved on the top strap, the blued steel action decorated with foliate work and hardwood chequered grips. It is expected to fetch £700-900.

Elsewhere, 19th-century Irish-made firearms attract a premium among collectors. The sale included an Adams Patent .44 calibre percussion revolver by Trulock & Harris of 9 Dawson Street, Dublin, estimated at £600-800, and an unusual .44 calibre percussion revolving six-shot pistol by J. Calderwood, Duke Street, Dublin, the plain steel round action engraved profusely with foliate work among the attractions. It could fetch between £500-700.

Echoes of the Wild West, meanwhile, are offered by a good 19th century .36 calibre six-shot percussion revolver by Remington, Patent December 17, 1861, which is estimated at £700-900.