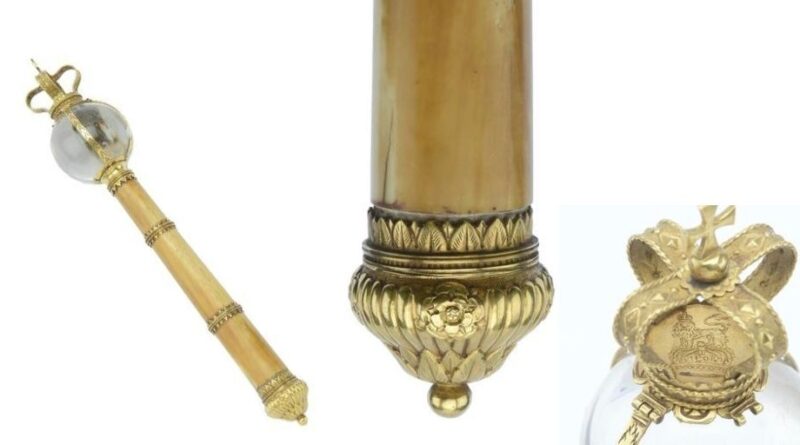 A rare and unusual ceremonial rock crystal and gold mounted staff of office or tipstaff, dating from the first half of the 19th century, discovered in a recent house clearance on the outskirts of London, is to be sold by coin, medals, banknotes and jewellery specialists Dix Noonan Webb in a live and online auction of Jewellery, Watches, Antiquities and Objects of Vertu next month.

The piece, offered for sale in original condition, without restoration, measures 26.5cm in length. Estimated to fetch £5,000-7,000, it is believed to be of possible historical interest and perhaps of royal association. 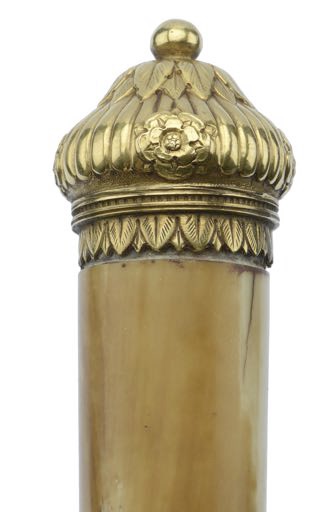 The ivory shaft on the staff of office is topped with a rock crystal sphere, beneath gold crown surmount, and engraved below with a crowned lion passant upon a crown. Frances Noble, Head of Jewellery at Dix Noonan Webb, explained: “The use of fine gold mounts, together with the engraved ‘crowned lion on crown’ (which is consistent with the style of engraving used on coinage during the reign of George IV), may suggest a possible Royal association.

“One theory is that this piece may have connections with the coronation of King George IV on July 19, 1821. This was an extremely lavish and fabulously expensive occasion (the total cost of the event was reported to be in the region of £243,000 – equivalent to £22 million today). Dignitaries and courtiers who attended the service processed in their fine robes, and carrying their staves of office on entry to Westminster Abbey. A series of detailed watercolours of this procession were painted by Sir George Nayler in 1823, later bound as a folio volume in 1837 (The Coronation of His Most Sacred Majesty King George IV) – in these paintings many of the guests are depicted carrying decorative staves of office.”

She continued: “There could also be royal connections with Scotland. In August 1822, following the coronation, George IV undertook a royal state visit to Scotland (the first royal visit of a reigning sovereign since King Charles II in 1651). The visit, organised by Sir Walter Scott, commenced on Monday August 11, with the King’s arrival at Leith. The Honours of Scotland – the Scottish crown jewels, had been recently rediscovered in 1818; they had been stored in a great oak chest in the stone vaulted Crown Room of Edinburgh castle, hidden there since the Treaty of Union in 1707, and unseen for over 100 years. The King’s visit culminated in a grand procession to restore the Honours to the Castle; contemporary paintings again illustrate the vast scale and expense of these events, with guests sumptuously and richly attired, bearing appropriate staves of office.”

The sale takes place on September 15.