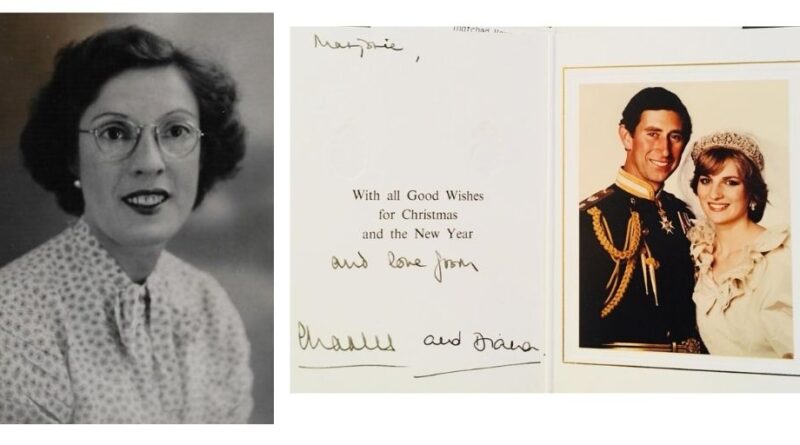 Touching private letters and cards from members of the British royal family confiding their innermost feelings to a trusted servant are expected to sell for thousands at auction.

Marjorie Dawson, who grew up in a terraced house in Bolton and was orphaned at the age of 12, became Princess Alexandra of Kent’s personal maid when the royal was 18 years old. Marjorie, then 39, served her from 1954 until she retired at the age of 75 in 1990. 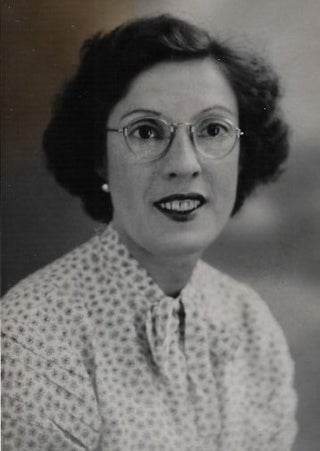 She travelled the world with the royal family, was whisked round the dance floor by Prince Philip, attended royal weddings, became a firm friend and supporter of Prince Charles and stayed in every royal residence from Buckingham Palace to Balmoral.

Now her vast collection of memorabilia, which includes letters and cards hand-signed by Princess Alexandra of Kent, Prince Charles and Princess Diana, is set to go under the hammer at Hansons Auctioneers on October 13 and could make in excess of £10,000.

Marjorie was held in such high esteem she received a Royal Victorian Medal for service to royalty. Inevitably, she bore witness to major life events and, such was the royal family’s trust in her, at times they confided in her.

For example, following the death of the Queen Mother, Charles wrote on May 16, 2002: ‘Dear Marjorie, I was so touched that you should have written as you did about my beloved grandmother. I have dreaded her eventual departure and now she leaves behind an enormous chasm in my life. However, she also leaves behind the most wonderful legacy of unbelievably happy memories of fun, laughter and an atmosphere of constant affection and interest in everything.

‘Such vital and extraordinary spirits are rare and I feel profoundly blessed that the Good Lord allowed me to have such a heavenly grandmother who taught me so many of the most valuable things in life. Oh, how we shall all miss her and everything she stood for … Bless you for your dear letter, with much affection, Charles’

Following Marjorie’s death at the age of 104 in 2019, the royal memorabilia was uncovered by her family. Marjorie kept everything – letters, notes, Easter, Christmas and birthday cards, even the gift tags from presents given to her during an extraordinary life as a royal servant.

The memorabilia includes an invitation to Prince Charles’ wedding to Lady Diana Spencer on July 29, 1981, and a letter from the prince, dated July 8, 1981, which reads: ‘Dear Marjorie, Thank you so much for your letter. I am so touched that there was such a nice reaction to your wedding invitation. I couldn’t be more delighted that it has given so many people such pleasure. Don’t forget to go to the loo before the wedding – it could be a very long wait in the cathedral! With my love, Charles‘.

People can also bid on part of a Spode dinner service from a royal Canadian tour in 1939, a photo album documenting Princess Alexandra’s official visit to Japan in 1961, a pictorial memento of the Duke and Duchess of Kent’s wedding in 1963 and cruise ship photos.

Marjorie was so highly thought of by Princess Alexandra, the Queen’s cousin, the 83-year-old royal personally delivered a birthday card from the Queen to Marjorie on her 100th birthday. By that time Marjorie was living in a Bolton care home.  Though unable to attend Marjorie’s funeral due to prior commitments, Princess Alexandra sent a card of condolence. 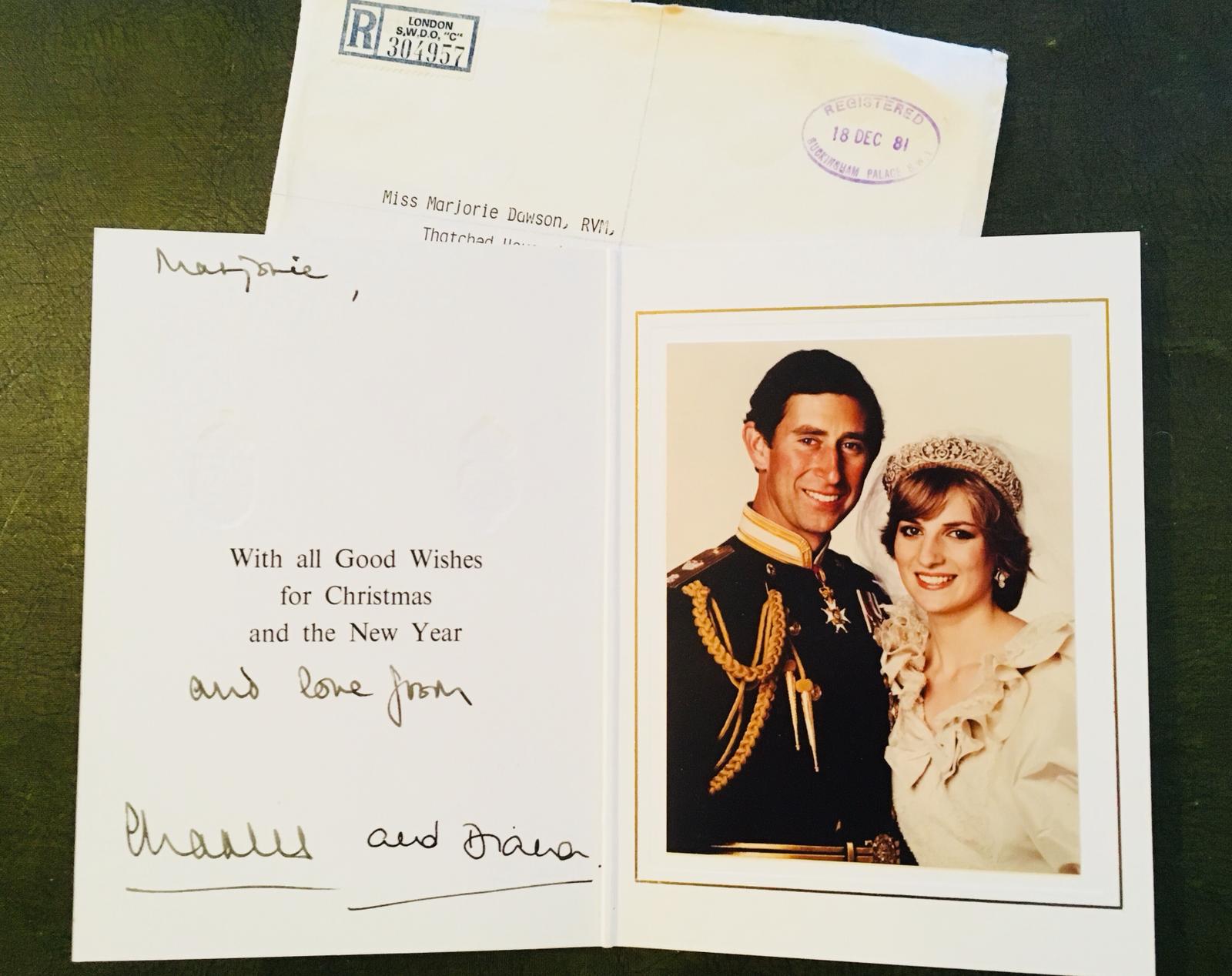 Jim Spencer, works on paper expert at Hansons, said: “I spent a few late nights going through packets and piles of papers, but I carried out my work with excitement and intrigue. This is such an important collection, much of it untouched. Marjorie must’ve cherished her career because she kept every little thing. I found envelopes stuffed full of postcards, programmes, menus, brochures, and countless notes on headed paper from houses, castles and palaces around the world.

“I found myself reading a reference letter from 1941 recommending Marjorie to future employers, and realised how much she’d achieved, how much she’d lived – really lived. I saw the endless stamps in her passports, and photographs of her dancing in her youth – full of smiles and vitality. I find it very moving to think of Marjorie travelling the world, getting so much out of life, from those humble and tragic beginnings. She was clearly a steadfast, treasured, loyal and devoted royal servant who gained the affection of the family she served.”

Marjorie became Princess Alexandra’s personal dresser and maid in 1954 and treasured her letter of appointment. Major life events are referenced in the collection, such as a letter from Prince Charles following the birth of Prince William.

On Buckingham Palace notepaper, it reads: ‘My Dear Marjorie, We were enormously touched to receive your very kind letter following the birth of our son… The reaction to the news has been overwhelming and thoroughly heart-warming and we are rapidly discovering what it is to be proud parents! With our very best wishes and apologies for having to send a typed letter – and with love from Charles’.

Marjorie attended Prince Charles’ wedding to Lady Diana Spencer at St Paul’s Cathedral in 1981 and decades later contacted him after he married Camilla Parker Bowles. In a note to Marjorie, dated April 16, 2005, Charles wrote: ‘Bless you for writing, so generous, we were both so touched. And you can have no idea how lucky I am to have my Darling Camilla. All love Charles.’

In other letters, Charles mentions his disquiet over press intrusion: “Unfortunately, we are now to be treated as mere pawns in a terrifying & ongoing media circulation war…” 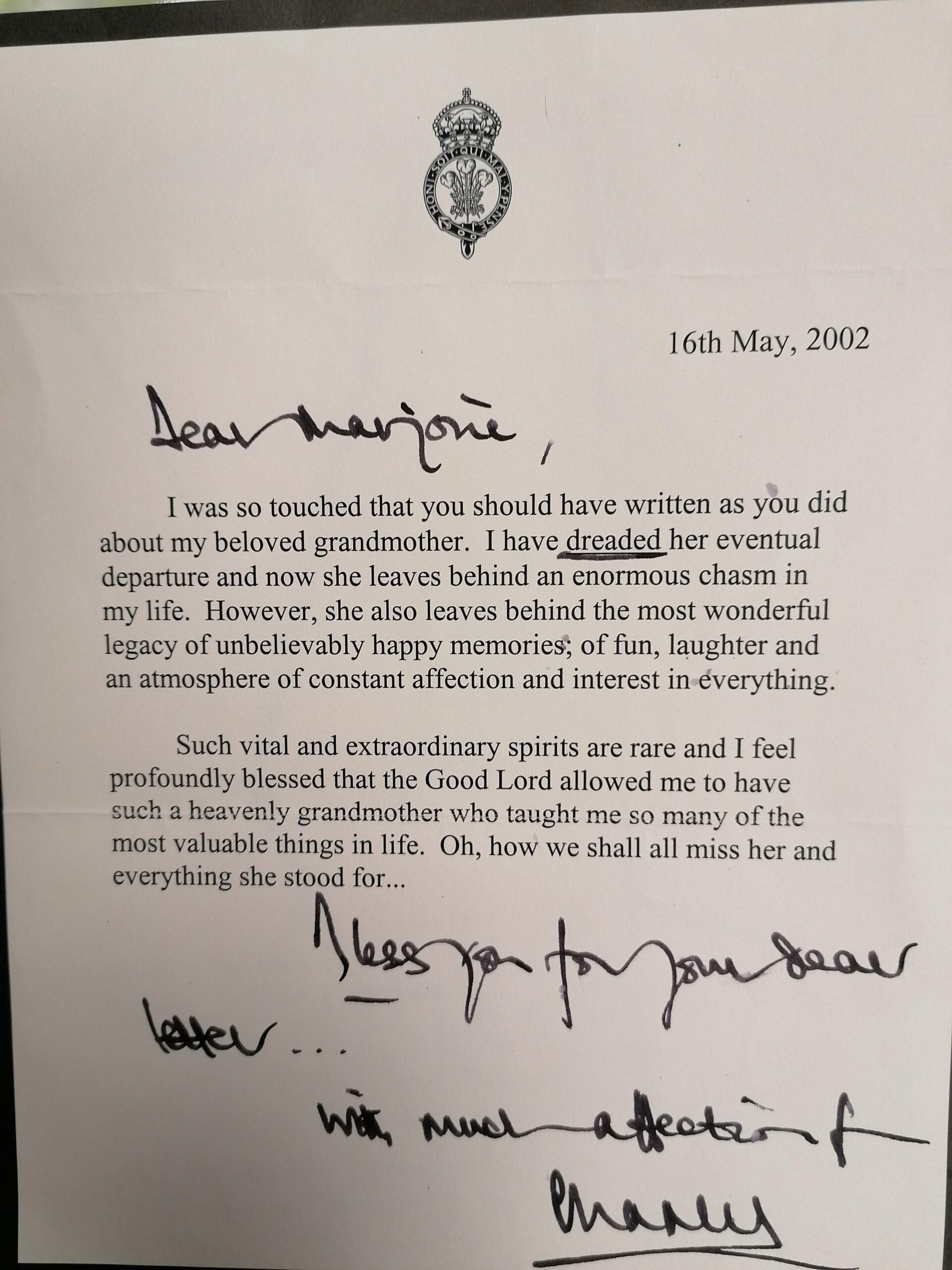 Marjorie’s great cousin David Knibb, 69, a retired carpenter from Jersey, said: “Marjorie was born in Bolton, Greater Manchester, in 1915. Her father died in the First World War and she lost her mother when she was 12, we think to Spanish flu. Luckily, family members took her in. As a small child she lived in Sapling Road, Bolton, but later moved to Morecambe, a coastal town in Lancashire.

“She went into service and initially worked for Lady Clark in Ireland before being appointed as Princess Alexandra’s maid. Her first job in the morning was to wake her up with a cup of tea and open the curtains. On one occasion at Buckingham Palace she accidentally went into the wrong bedroom and woke up Princess Margaret.

“It was Marjorie’s job to arrange all the clothing and accessories needed for the princess on a day to day basis and also pack for royal visits which demanded two outfits a day. She also looked after the princess’s jewellery collection.

“In her youth, Marjorie loved amateur dramatics and was a keen dance. She danced on several occasions with the Duke of Edinburgh and became good friends with the entertainer Lionel Blair and actress Thora Hird.

“She married later in life to a royal butler, Willoughby Wood Barnard, but it was a single person’s job. She never had any children. It’s been a long process sorting through all the memorabilia. We’ve found Easter messages from the Queen Mother and a letter from Princess Alexandra saying she missed Marjorie when she was on holiday. This is just the tip of the iceberg. There are five diaries each documenting five years of royal service and we’ve found cine film and slides in the attic.”

Mr Spencer said: “Marjorie claimed the secret of her long and successful life was a regular glass of whisky and portion of fish and chips. Perhaps that’s why the royals liked her so much!”