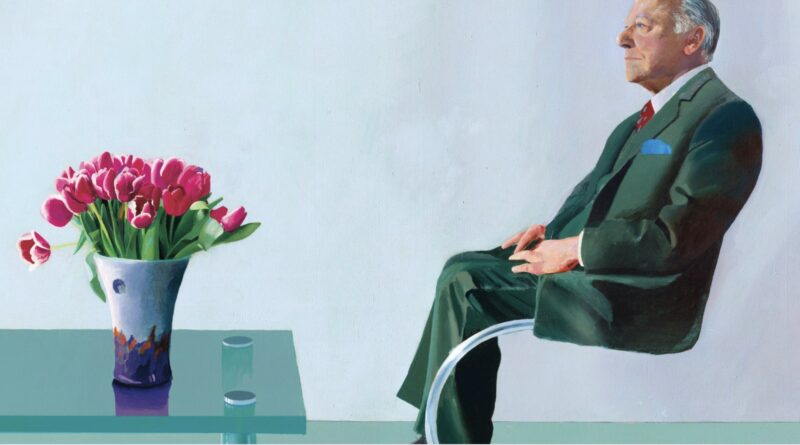 David Hockney’s Portrait of Sir David Webster, an exquisite tribute to Sir David Webster, the former General Administrator of the Royal Opera House and a defining influence, will be presented in Christie’s Post-War and Contemporary Art Evening Auction on October 22.

Painted in 1971, it depicts Webster in the artist’s studio, seated upon a Mies van der Rohe ‘MR’ chair before a glass table. The painting is being offered by the Royal Opera House with an estimate of £11-18 million. Proceeds from the sale will contribute towards vital funding required by the world-renowned arts venue to alleviate the financial impact of coronavirus, the most serious crisis the organisation has had to face.

This will allow the Royal Opera House not just to survive but to thrive in its future programming.

Rendered on a grand scale, the work unites Hockney’s flair for human observation with his lifelong passion for opera. From 1975 until 1992, David Hockney would design sets for venues including Glyndebourne, the Metropolitan Opera in New York and the Royal Opera House itself.

Inviting stylistic comparison with Hockney’s landmark double portraits produced between 1968 and 1975, Portrait of Sir David Webster demonstrates the meticulous exploration of space, perspective, lighting and compositional drama that would eventually come to inform his theatrical endeavours.

Alex Beard, Chief Executive of the Royal Opera House, said: “As we face the biggest crisis in our history, the sale of David Hockney’s wonderful portrait of Sir David Webster is a vital part of our strategy for recovery, and the proceeds will be used to ensure that the world’s greatest artists can once more return to our stages. To sustain our community of artists through this period, and to ensure we can continue to delight audiences for decades to come with extraordinary ballet, dance, music and opera, we have a four-pronged plan for recovery: a programme of restructuring and staffing cuts, reducing our costs wherever possible; a fundraising campaign from our audiences and supporters to sustain our community of artists, craftspeople and backstage staff; support from Government; and realising such value as we can from our assets”.

Katharine Arnold, Co-Head, Post-War and Contemporary Art Europe: “David Hockney’s Portrait of Sir David Webster is an extraordinary painting that perfectly captures the artist’s mastery of paint and flair for colour. Rendered in brilliant shades, Hockney has animated the visionary figure of Sir David Webster; a man who was instrumental in the expansion of the Royal Opera House into the institution we know and love at the heart of London.

“Painted at the height of Hockney’s naturalistic phase, so profoundly demonstrated in his double portraits of this time, we see the artist’s expert handling of light and shade: the way that cloth drapes around the body, how light passes through glass, reflects off curved stainless steel. With Hockney’s light-hearted wit, he devotes half of the canvas to a blushing vase of tulips, the artist’s favourite flower. The staging of this painting feels almost theatrical, which is of course a fitting tribute.

“A renowned opera enthusiast, Hockney went on to design ground-breaking stage sets for major operas from 1975-1992 including the Royal Opera House. As a long-established British institution, Christie’s is proud to be offering this major painting to support the future of the Royal Opera House, which is a great national treasure. Portrait of Sir David Webster will be a key anchor of our 20th Century Paris to London sale season, which celebrates the cultural landscape of these dynamic cities.”

Portrait of Sir David Webster notably features the same glass table and vase of tulips as the 1969 painting Henry Geldzahler and Christopher Scott. The tulips rendered in vibrant colour sit atop a translucent glass table top: a phenomenon that recalls the extraordinary illusionism of Hockney’s treatment of water in his swimming pool paintings.

Webster himself is seen seated in a Mies van der Rohe, Marcel Breuer chair just as Ossie Clark is featured in Mr and Mrs Clark and Percy (Tate, London), completed the same year. Though Webster sits alone, the painting captures the sense of hyper-real interaction that lay at the heart of the double portraits: the tulips are startlingly anthropomorphic, as vivid, alive and conversational as another person in the room.