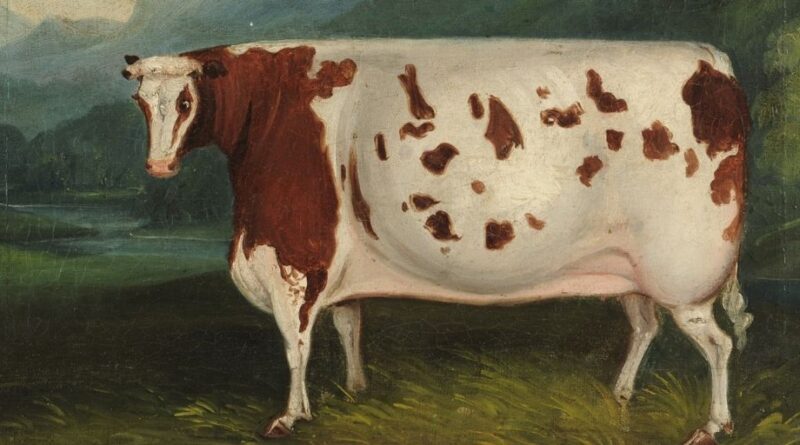 Memorabilia relating to a tour around England in 1812 by the mighty 312 stone beast – known as the Craven Heifer – sparked competition between four phone bidders and internet buyers around the world at Hansons Auctioneers’ Library Auction on October 13. The hammer finally fell at £5,500 from an estimate of £300-£500 – 11 times the top guide price. 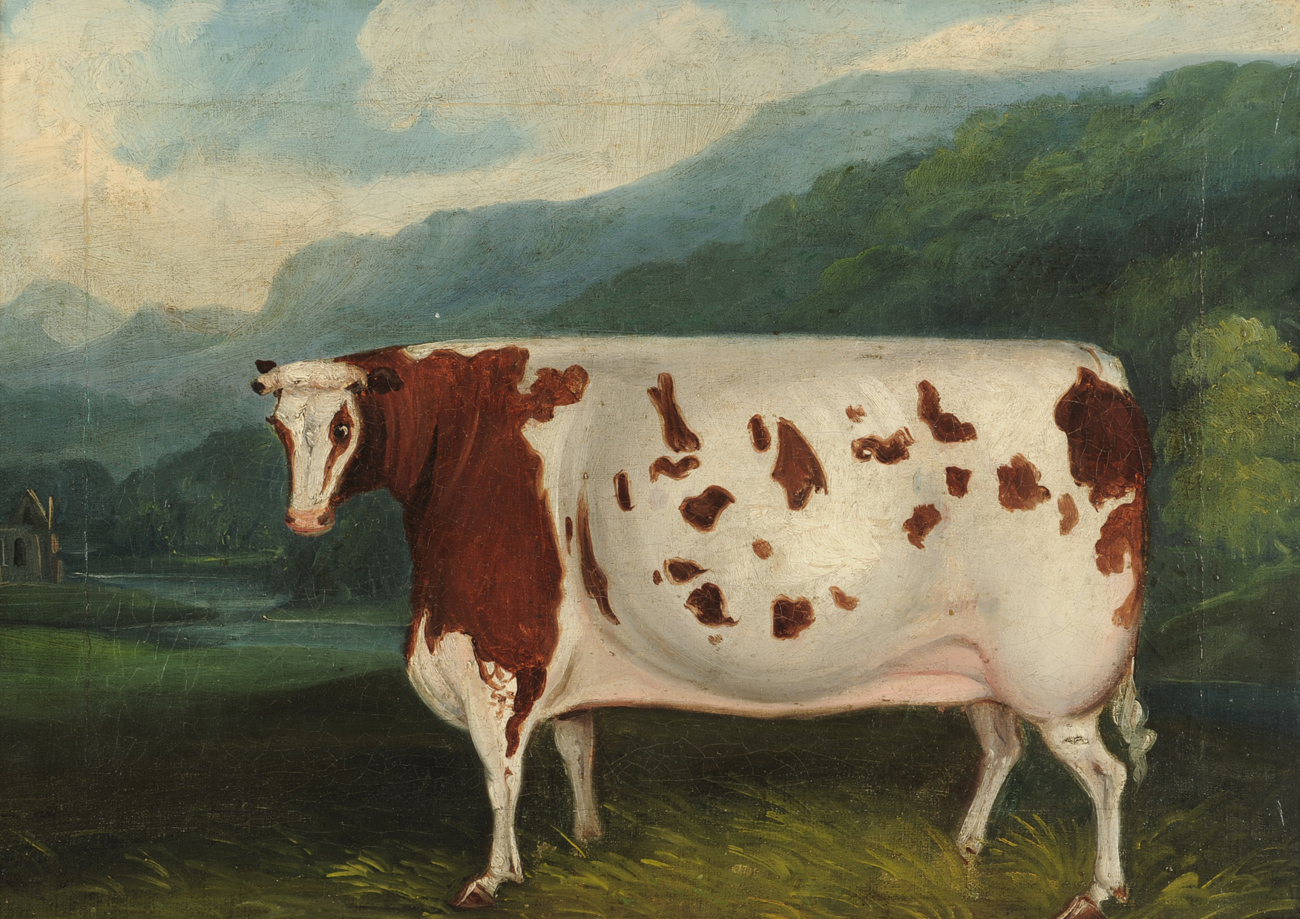 To this day the Craven Heifer, which lived from 1807 to 1812, remains the largest cow ever shown in England. It weighed 312 stone; its length from nose to rump was 11.3 ft; its height at the shoulder was 5.3 ft and the thickest part of its girth measured 10.1 ft.

Such was its ample proportions people paid to see the animal during the tour which saw it travel from Wakefield in West Yorkshire to London, stopping at towns and cities in between.

It was bred by the Rev William Carr in 1807 on the Duke of Devonshire’s estate at Bolton Abbey, Yorkshire. Carr fed her relentlessly for five years until she weighed 312 stone. She was so large a special door twice as wide as the norm had for the cowshed.

She was purchased by John Watkinson, of Halton East, North Yorkshire, for £200 and taken on tour, attracting attention wherever she went. She travelled to Smithfield in London from Wakefield, a journey which took 73 days.

The archive of correspondence sold at Hansons included 30 letters, mostly addressed to Henry Pickop at Bolton Abbey, reporting on how the tour was going and recording the money received in selling tickets and prints of an engraving of the Craven Heifer. Notes also detailed expenses for barns, hay, straw, corn and cabbage.

The letters described difficult days with no success and poor weather, and more profitable days with crowds and good takings.

The archive also included an original advertising bill, printed by Griffith Wright of Leeds, which proclaimed: ‘The Wonderful Four Year-old Short-Horned Craven Heifer, fed and bred by the Rev. William Carr, of Bolton-Abbey…Will be shewn at …Admittance for each Person is 1s. N.B. This Beast is allowed by all who have seen her to be the largest and fattest of her Age, of any ever shewn in England. An Engraving of this fine Heifer will be published by Subscription at One Guinea each‘.

Jim Spencer, head of Hansons Library Auction, said: “I just love the idea of a road crew on tour with England’s fattest ever cow in 1812, trying to sell tickets and prints in the rain, putting the heifer in a stable at an inn; catering to huge crowds on busy days – and perhaps celebrating with a few more noggins of ale in the tavern. 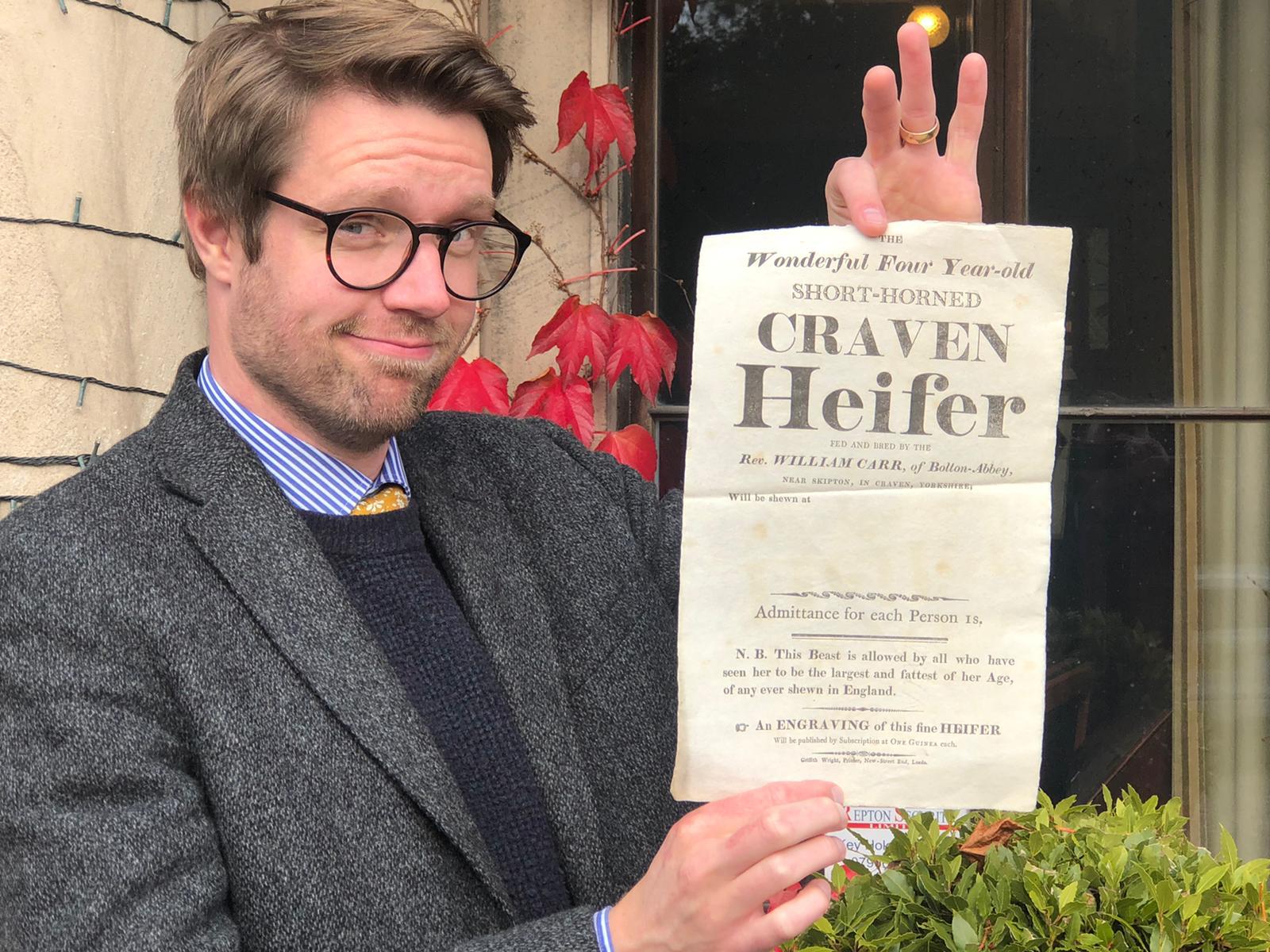 “I tried to do a little thread on Twitter, after I’d researched and catalogued this, and it was met with a pretty flat response. I was really pleased it caused a stir at auction, I thought I was all alone in the world! My passion was vindicated. It’s always difficult to put a value on stuff like this, fortune telling really. I guided at £300-£500, but I thought it fully deserved to generate a bidding battle. Those Craven Heifer fans showed their love in the end!”