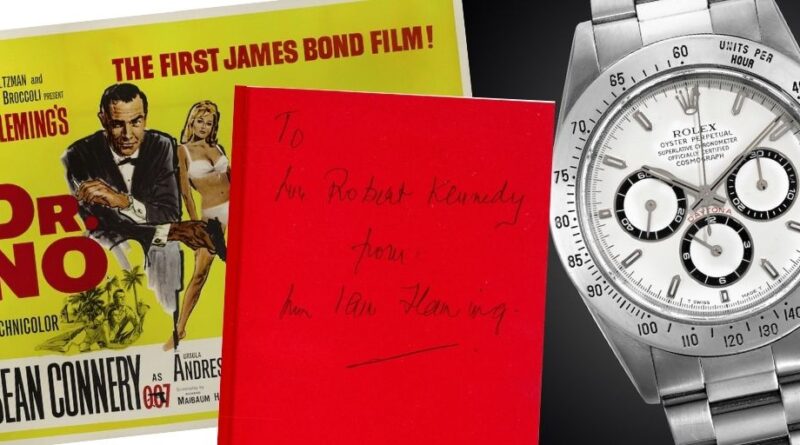 While the release of the latest James Bond film No Time to Die may have been delayed until next year, fans of 007 should head to Sotheby’s Bond Street where the auction house’s galleries will transform into a haven for enthusiasts of the long-serving super spy.

Celebrating one of the best-selling literary franchises and longest continually running film series of all time, the exhibition encompasses items from where it all began with Ian Fleming’s creation of the suave MI6 agent in Casino Royale, to the original film poster for the upcoming, hotly-anticipated No Time to Die. Sotheby’s said the exhibition will trace the rise of 007 from the pages of a novel to dominating silver screens across the globe for nearly sixty years.

Sotheby’s London is a fitting location for this celebration of Bond, both as Fleming’s choice of auctioneer and a part of the James Bond story. The thrilling auction of a ‘very important Fabergé terrestrial Globe’ in The Property of a Lady is set in the Main Sale Room and the sequence was adapted for the film Octopussy (1983), shot on the Bond Street premises.

Nearly two hundred film posters, over one hundred books, a selection of timepieces that have adorned his wrist over the years and one quintessential Bond car, the Aston Martin DB5, will go on display from 6 to 10 November, ahead of the sales taking place online from October 27 to November 13.

With prices ranging from £100 to £120,000, these sales offer original fans and new collectors the chance to acquire a piece of Bond history.

The first sale to open is a rare collection of Ian Fleming books, assembled over many years by a single owner, comprising rare first editions, typescripts, pre-publication proofs and presentation copies signed by the author.

This auction will be led by a final revised typescript of the fourth Bond novel by Fleming, Diamonds Are Forever (est. £80,000-120,000). Almost every page of the typescript features autograph revisions, revealing Fleming’s working practices as he honed this book into its final shape, and bringing additional life and colour to the world surrounding 007. 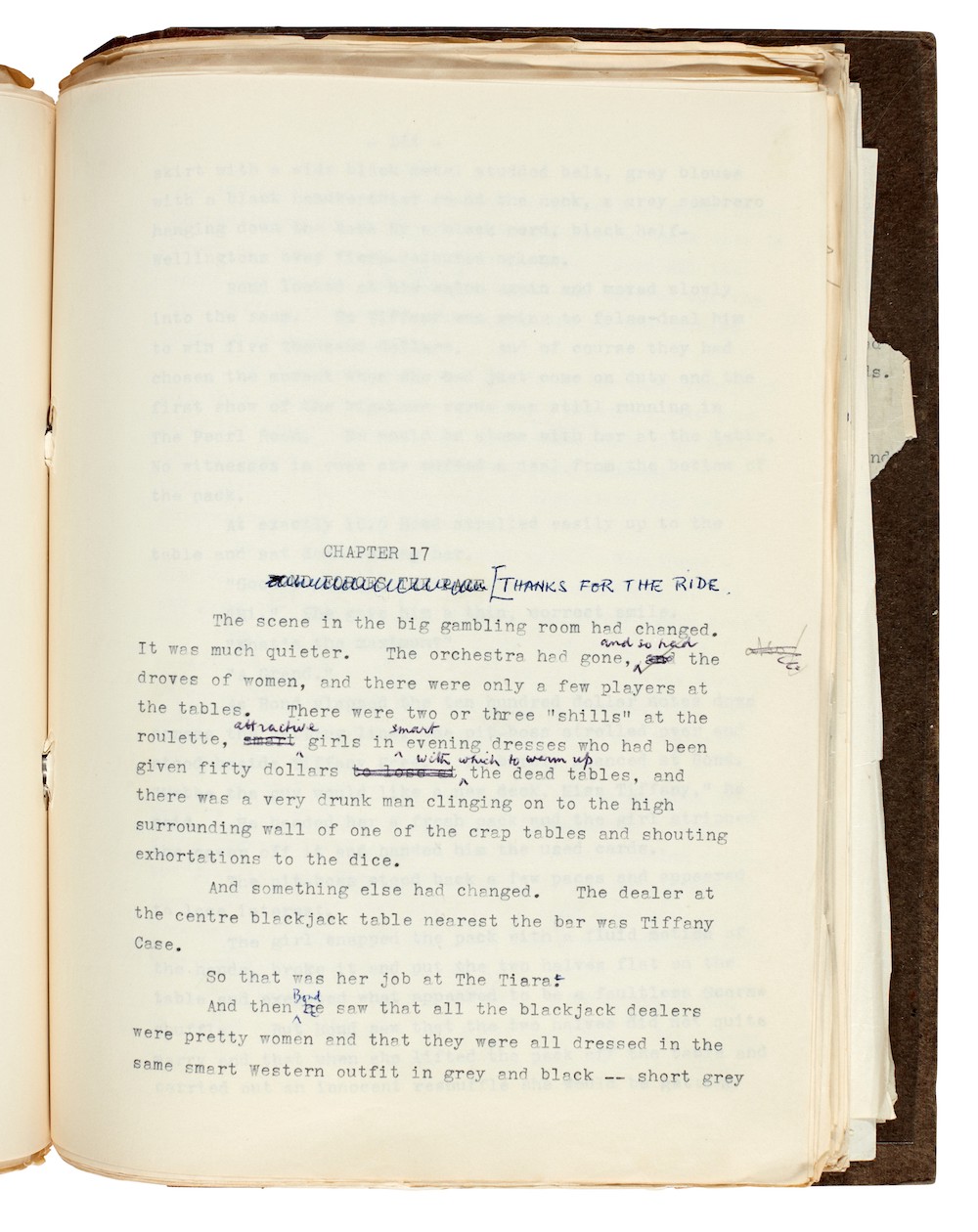 A first edition presentation copy of Moonraker inscribed by the author to detective fiction writer Raymond Chandler (est. £70,000-100,000) sheds light on the crucial impact Chandler had on Fleming’s literary career and the longevity of James Bond. With the publication of Moonraker, Fleming had had enough of his creation, convincing himself that he had gone as far as possible with writing about James Bond. Chandler thought otherwise, encouraging the writer with praise for his second novel, Live and Let Die, and a written testimonial on the book for Fleming’s publishers. Chandler’s approval seems to have made Fleming quickly decide that his next book, instead of finishing Bond for good, would go to the opposite extreme. It seems that Chandler transformed Moonraker from among the last Bond books to the third of fourteen.

As well as delving into Fleming’s creative process and his surrounding literary influences, this collection also provides insight into the writer’s associations with some of the most recognisable names in politics. Since boyhood, Fleming was a great admirer of Winston Churchill. His father, Valentine Fleming, served alongside Churchill during World War One, and when he was killed, he wrote an obituary in The Times – an article which Fleming framed and hung in his various homes. In 1954, the writer inscribed a first edition presentation copy of Live and Let Die to Churchill with the words “To Sir Winston Churchill from whom I stole some words! from The Author. 1954” (est. £50,000-70,000).

Fleming’s political relationships also stretched across the pond, as demonstrated by a first edition presentation copy of The Spy Who Loved Me, inscribed by the author to Robert Kennedy in 1962 (est. £35,000-50,000). Fleming first met the younger Kennedy brother in 1960, becoming acquainted with him through the future president, John F. Kennedy. John and Fleming had discussed the ‘Cuban threat’ over dinner, and Kennedy later told Life Magazine of his fondness for James Bond. This was enthusiastically quoted on the dust- jacket of the US edition of the Spy Who Loved Me – a major boost for Bond’s popularity in America. 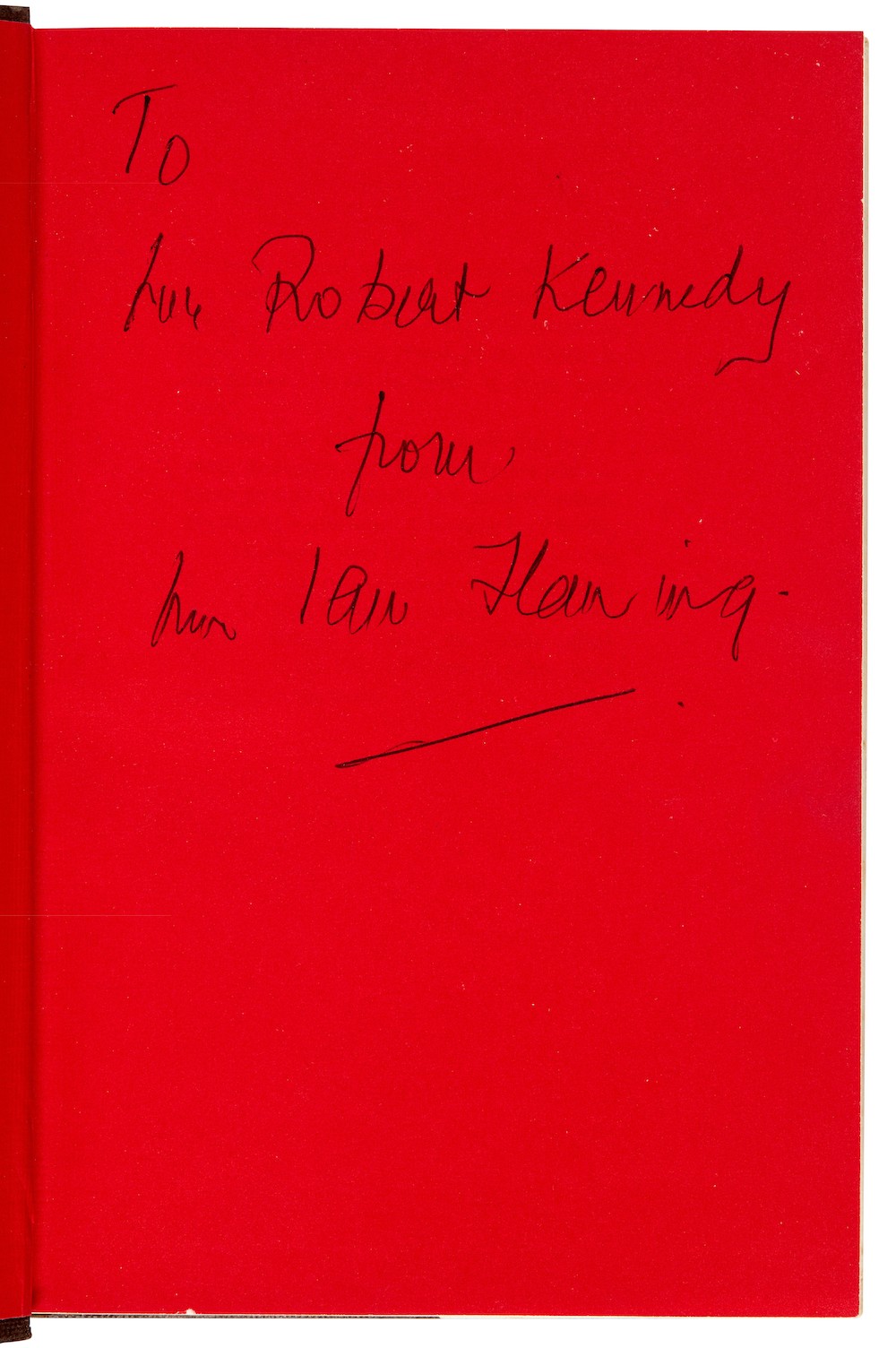 Just a few months after this correspondence, Fleming’s words came to life on the big screen, with the release of Dr. No starring Sean Connery. Based on the 1958 novel, this film established many themes that are synonymous with Bond films, despite being made on a low budget. The promotional campaign emphasised the sex appeal of the film, as demonstrated by Mitchell Hooks’ artwork for the first ever Bond film poster (est. £15,000-25,000). A rare piece in pristine condition, this British poster depicts Connery with a smoking gun, surrounded by four scantily clad women. 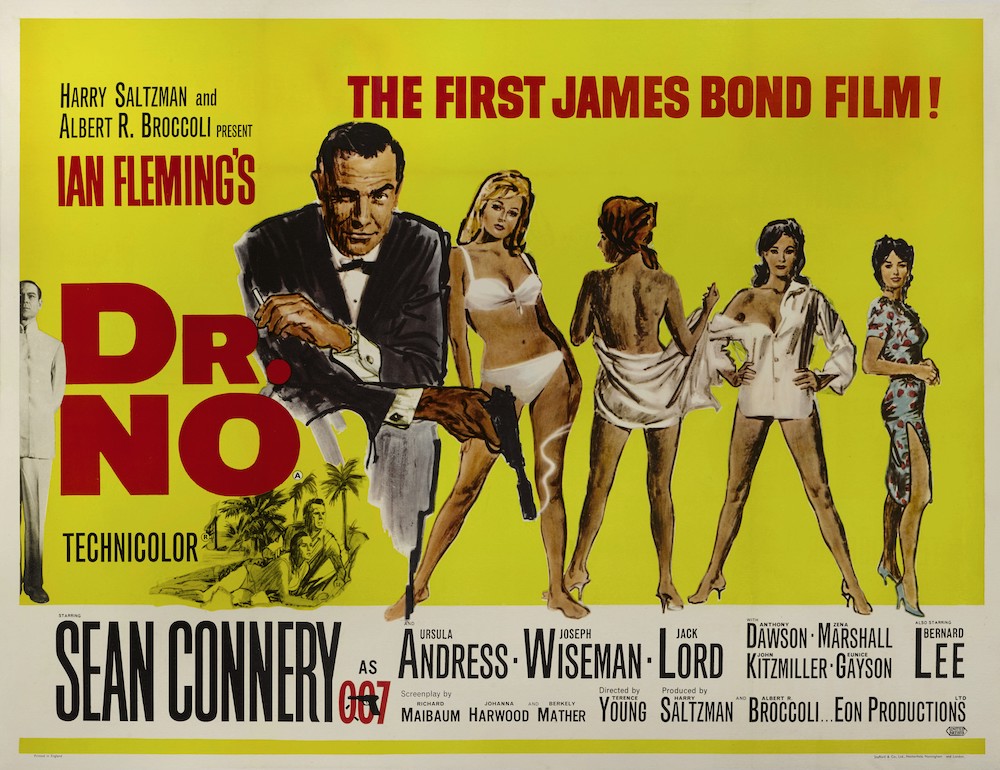 Although a number of artists produced the artwork for these promotional materials throughout the 1960s, the formula stayed very much the same – a well-dressed, imposing Bond with a weapon, alongside a number of ‘Bond girls’, as depicted on the complete set of exceptionally rare US door panels for the 1967 film You Only Live Twice (est. £15,000-25,000). 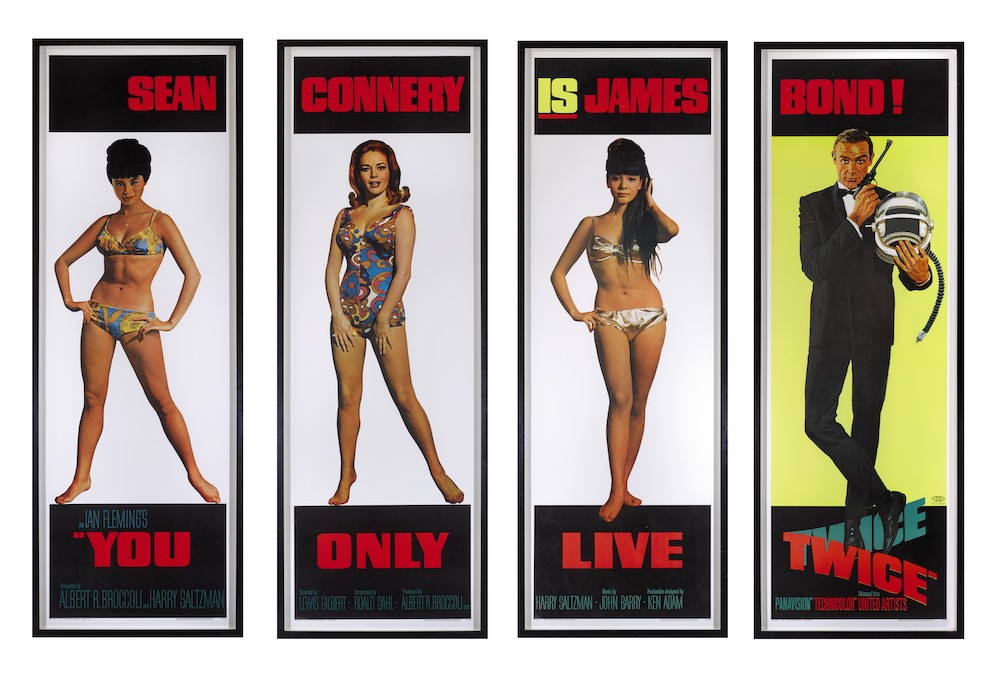 These early films paved the way for one of the top highest-grossing film series of all time. To date, Eon has produced twenty-five Bond films over nearly 60 years, featuring six different actors as the protagonist and totalling a worldwide gross of nearly $7 billion. Whilst many of the original themes established by Dr.No still appear, the films and their leading character have changed over the years for a new generation of fans. This is evident by comparing the 1962 poster to that which was recently released for the forthcoming No Time to Die (est. £100-200). Gone are the vibrant colours, tailored suits and overly sexualised female figures, replaced by a more serious Bond against a dull-coloured background, dressed humbly in a jumper and cargo trousers.

Despite an ever-changing 007, one factor has remained a constant over the years: Bond’s penchant for fine timepieces and fast cars. For nearly six decades, the biggest names in horology and motoring have clambered to secure a prized spot on the screen alongside Bond.

Since its first appearance in the 1964 film Goldfinger, one car manufacturer has remained synonymous with 007: Aston Martin. Whilst the original 1959 novel described the British spy as driving a DB3, a modified version of the DB5 was featured in the film adaptation, complete with clever but deadly gadgets. The DB5 has since appeared in eight films, as well as in the trailer for the upcoming No Time to Die. As part of this exhibition, Sotheby’s will look back to the year that the love affair between the DB5 and Bond began, displaying a 1964 Aston Martin DB5 on offer for private sale through RM Sotheby’s (price available on request). 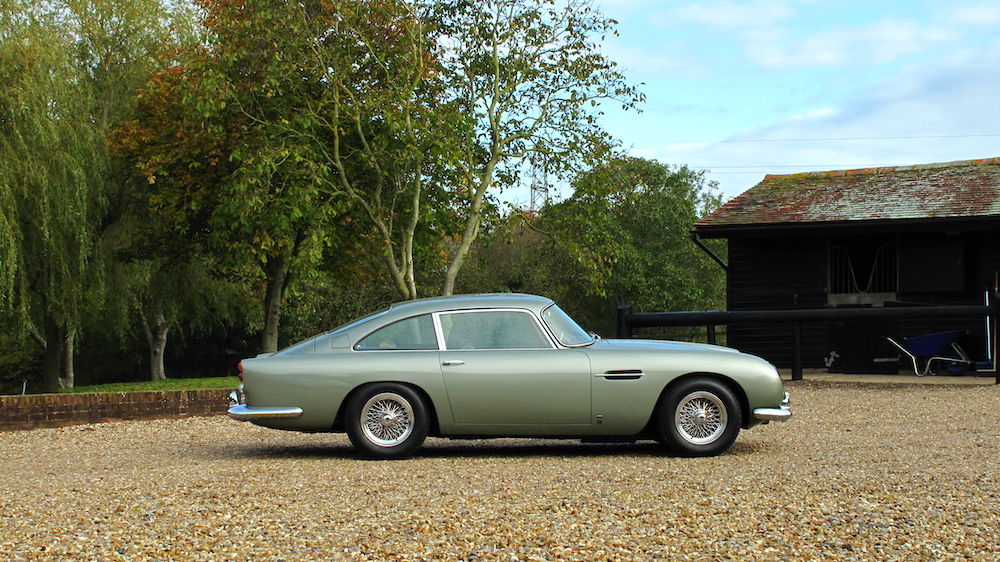 Bond’s watch brand loyalty has been less consistent over the years, with the agent flitting from the likes of Seiko to TAG Heuer; however, two brands bookend 007’s silver screen journey so far: Rolex and Omega. The early Bond films stay true to Fleming’s brief mention of Bond’s choice of timepiece in the 1963 novel On Her Majesty’s Secret Service, “a heavy Rolex Oyster Perpetual”. From the 1964 to 1989, Bond is seen wearing the Swiss manufacturer on several occasions, with the Submariner model appearing to be his preference. Since the reboot of the film series in 1995, Omega has been its official partner, with Bond sporting the Seamaster for the past twenty-five years. 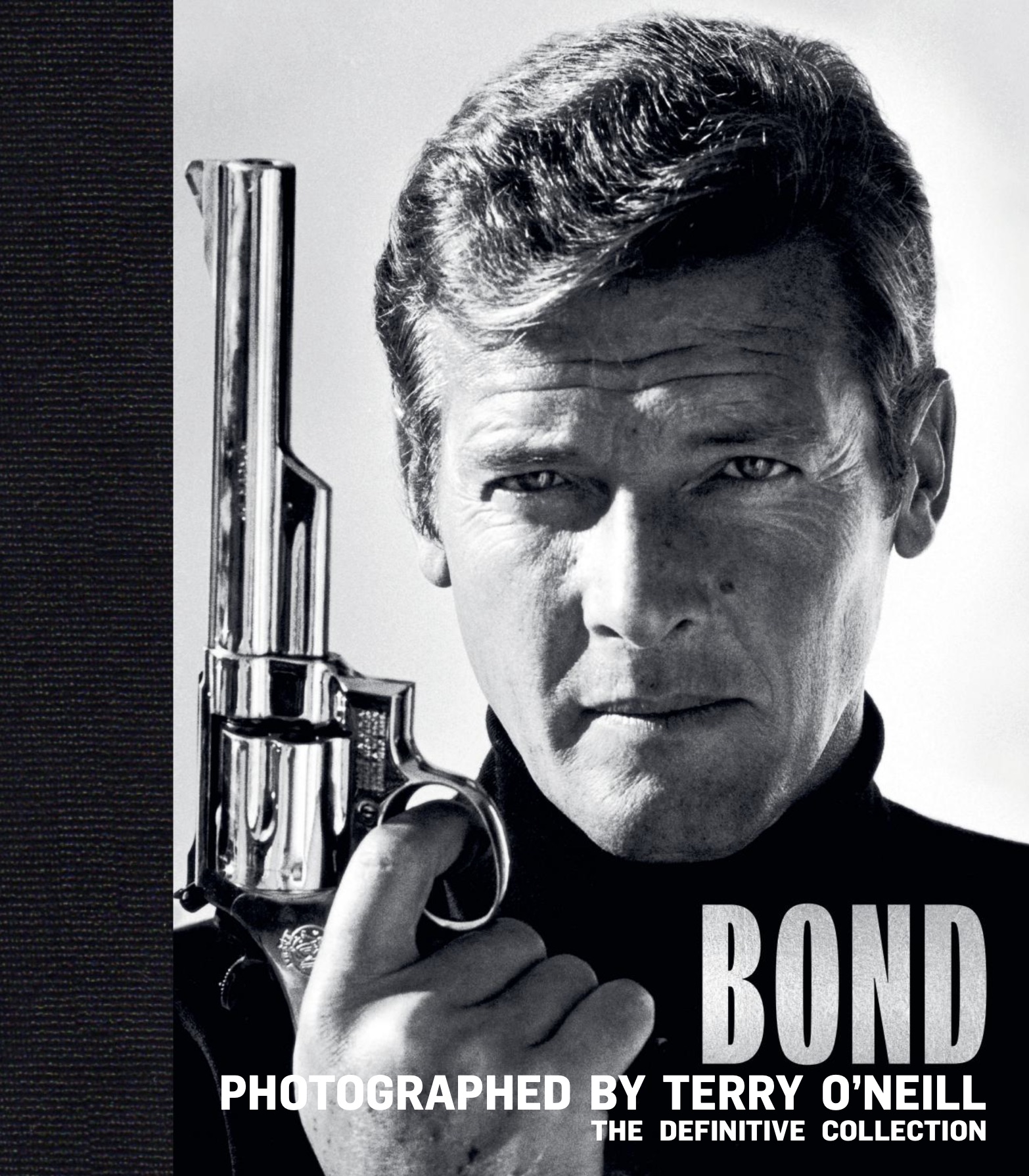