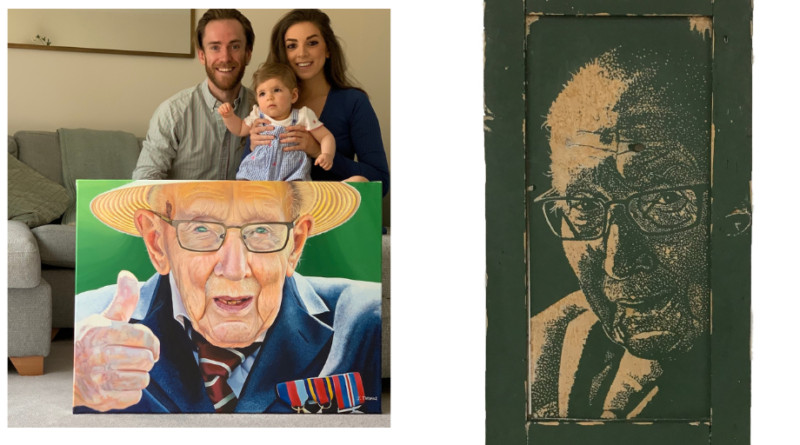 A collection of artworks given to Captain Sir Tom Moore in honour of this 100th birthday are being in an online auction this month.

All proceeds raised from the sale, conducted by Sworders in the timed online sale that will run until Remembrance Sunday on November 8 will go directly to The Captain Tom Foundation.

The heart-warming story of Captain Tom and the money he raised for NHS charities has been a rare ray of sunshine during an extremely challenging year. His plan was to do 100 laps of his garden, 50 metres at a time, before he reached his 100th birthday on April 30.

The former British army officer hoped to raise £1000 for the health service that had nursed him through a fractured hip and cancer scare. In fact, the total donated by the public amounted to £38.9million which is now with NHS Charities to distribute.

He said of the NHS frontline staff: “You’re all entering into something where you are putting yourself in danger and you’re doing that for the good of the people here. You are doing a marvellous, marvellous job.”

The ‘Captain Tom effect’ reached well beyond his own charity walk. He inspired fundraising throughout the world, giving motivation to everyone from five-year-old British school children to war veterans in Russia, Canada and Africa. His actions also inspired artists, both amateurs and professionals, to use their passion and skills to mark his achievement. Captain Tom received over 120 paintings and drawings.

He and his family have been humbled by the outpouring of generosity from people across the UK and indeed all over the world. What inspired them further was that even once the £38.9million had gone to the NHS Charities they continued to receive scores of messages of support and encouragement. It quickly became clear to the family they could go on helping many more people and subsequently The Captain Tom Foundation has been set up. 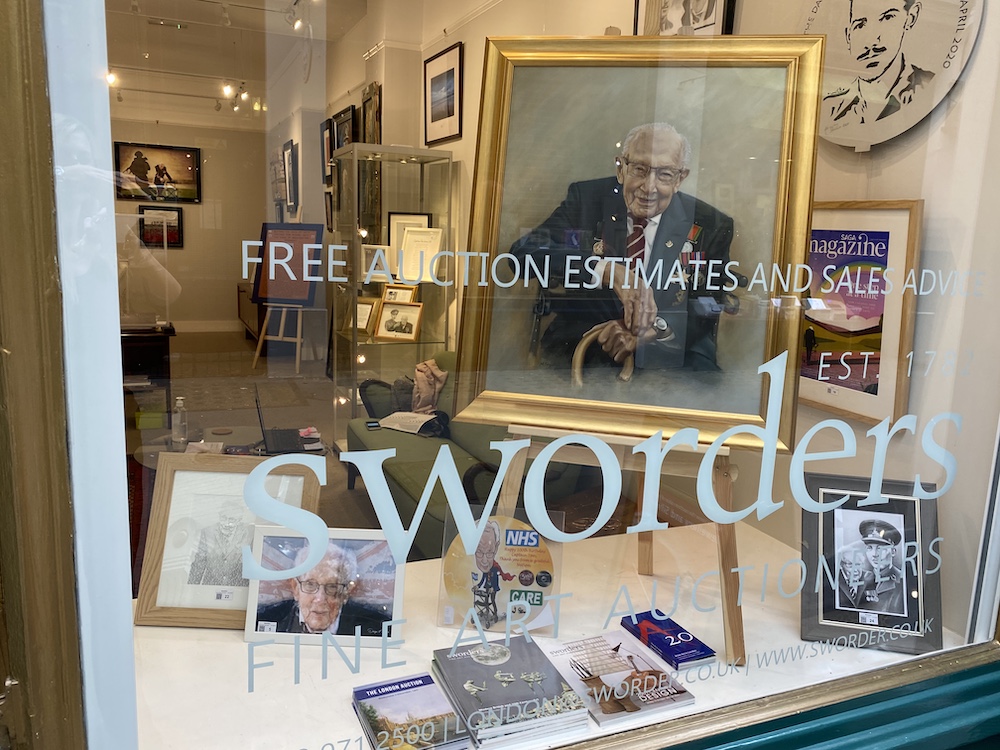 “I was overwhelmed to receive so many wonderful pictures, there are some very talented artists out there. We discussed how best to celebrate them all and felt holding an auction would be a brilliant way to share these wonderful pieces with a wider audience whilst also raising valuable funds for causes close to our hearts. We are grateful to Sworders who have partnered with us to make all this possible.”

The pictures range from cheerful amateur sketches to works by professional artists. Estimates range from £5 to £5,000 plus.

Manchester artist Jamie Green, who has appeared in two series of Sky Arts’ Portrait Artist Of The Year, created his artwork using a reclaimed cupboard door sourced from an architectural salvage yard. The piece was put together over the course of a week.

Jamie, who lives in Manchester, said the door is about 100 years old itself, so “seemed to be the perfect foundation” to start with.

“I applied a military green paint to the door surface to create a solid base,” he said. “Using various chisels, I etched into the surface to create the portrait. I wanted to create this as a tribute to the outstanding fundraising successes Captain Tom has achieved, and in some way myself make a small contribution.”

While at home nursing her nine-month-old baby, Justine Thomas was inspired by Captain Tom to begin painting again. “In lockdown, Captain Tom’s beautiful, kind face inspired me to pick up a paintbrush for the first time in years and spend the last few months of my maternity leave paying tribute to him while my baby napped. “ 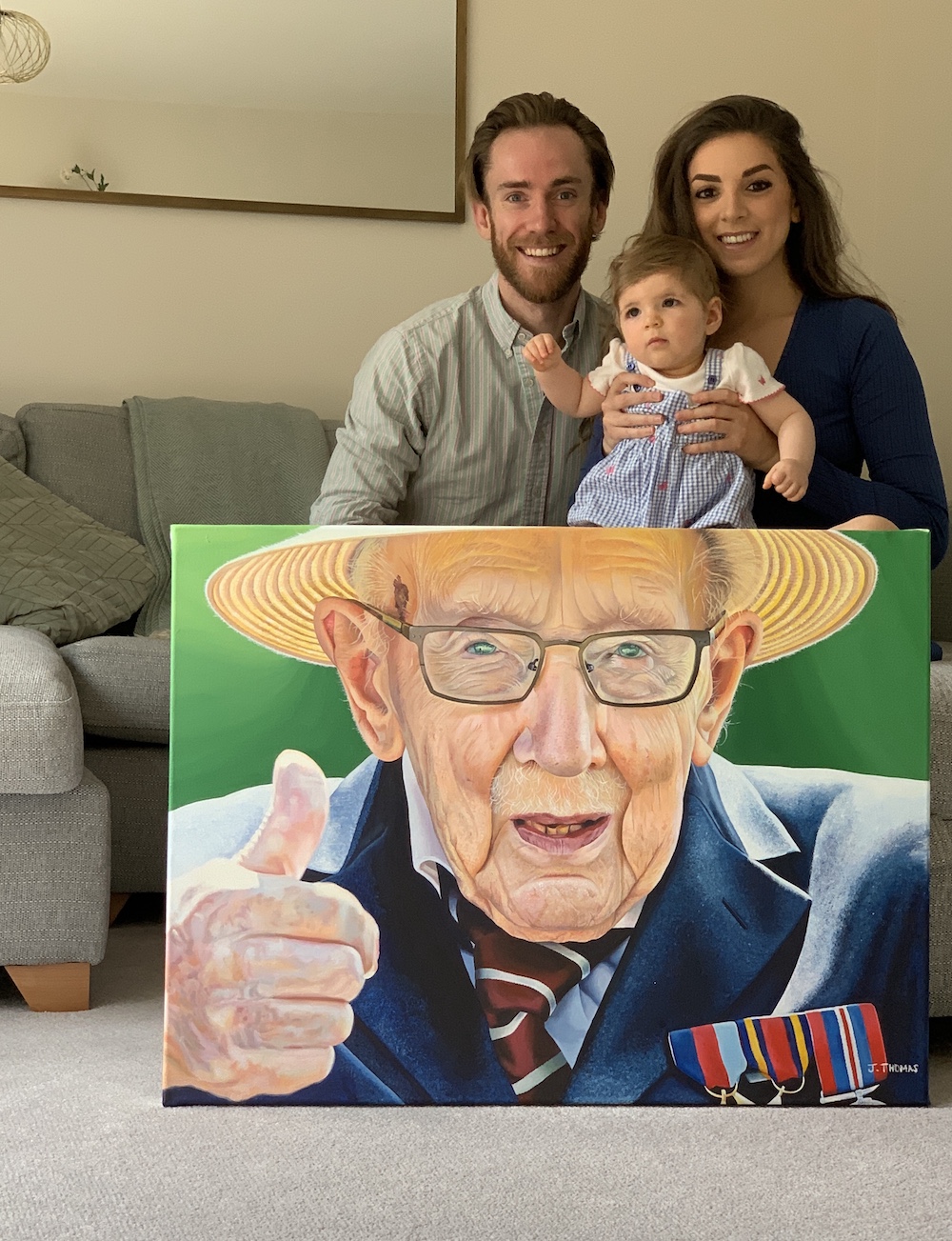 The artworks are on view at Sworders’ London Gallery in Cecil Court from now until October 30.