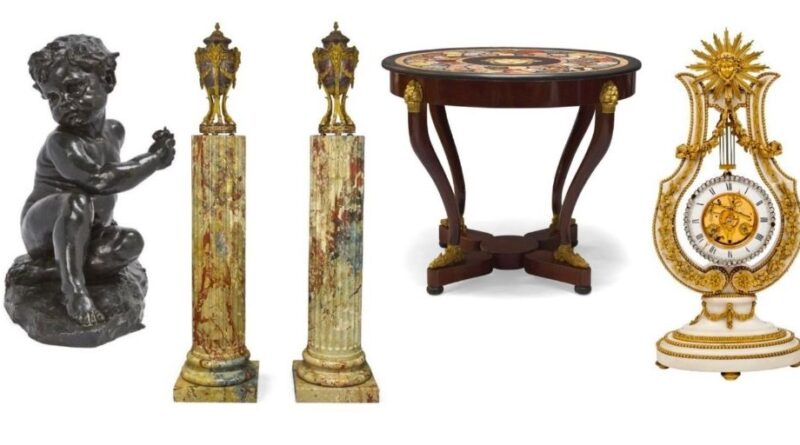 London’s Roseberys‘ final Fine & Decorative auction of the year will take place on November 25 with over 500 lots, ranging from works of art, and silver to furniture from around the globe.

Anna Evans, Head of the Fine & Decorative department commented: “The latest Fine & Decorative sale at Roseberys offers a wonderful cross-section of pieces to suit all tastes and budgets from traditional furniture and sculpture such as a beautiful Italian centre table with pietra dura top, and a bronze sculpture of one of Queen Victoria’s grandchildren by Dalou, to Louis Vuitton luggage and designer handbags.”

After Rodin, Dalou was one of the most important sculptors of his time and regarded as one of the principal exponents of naturalist sculpture in France in the late nineteenth century. After Dalou’s death, the executors of his will permitted the Parisian firm of A.A. Hébrard to cast certain bronze from plasters and terracotta pieces found in the sculptor’s studio in limited editions.

This bronze sculpture is after one of the figures of children represented in a terracotta monument dedicated to the memory of those grandchildren of Queen Victoria who died in infancy. The monument, completed by Dalou in 1878, was produced for the Private Royal Chapel at Windsor Castle. An example of the present lot in terracotta is in the Petit Palais, Musée des Beaux-arts de la Ville de Paris. This sculpture has been entered into the sale with an estimate of £6000-8000. 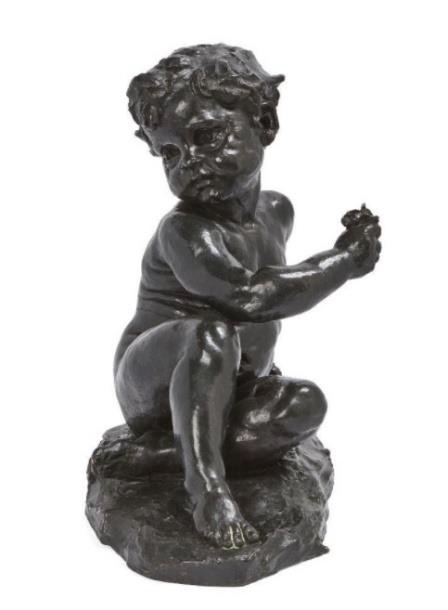 A pair of 19th century Louis XVI style gilt-bronze mounted breccia violette marble urns is another eye-catching highlight leading the sale. The pair of urns come together with variegated fluted marble pedestal columns. Beautifully made with fine cast mounts, these urns on pedestal columns make an eye-catching focal point to an interior, and have been estimated to make £4000-8000 at auction. 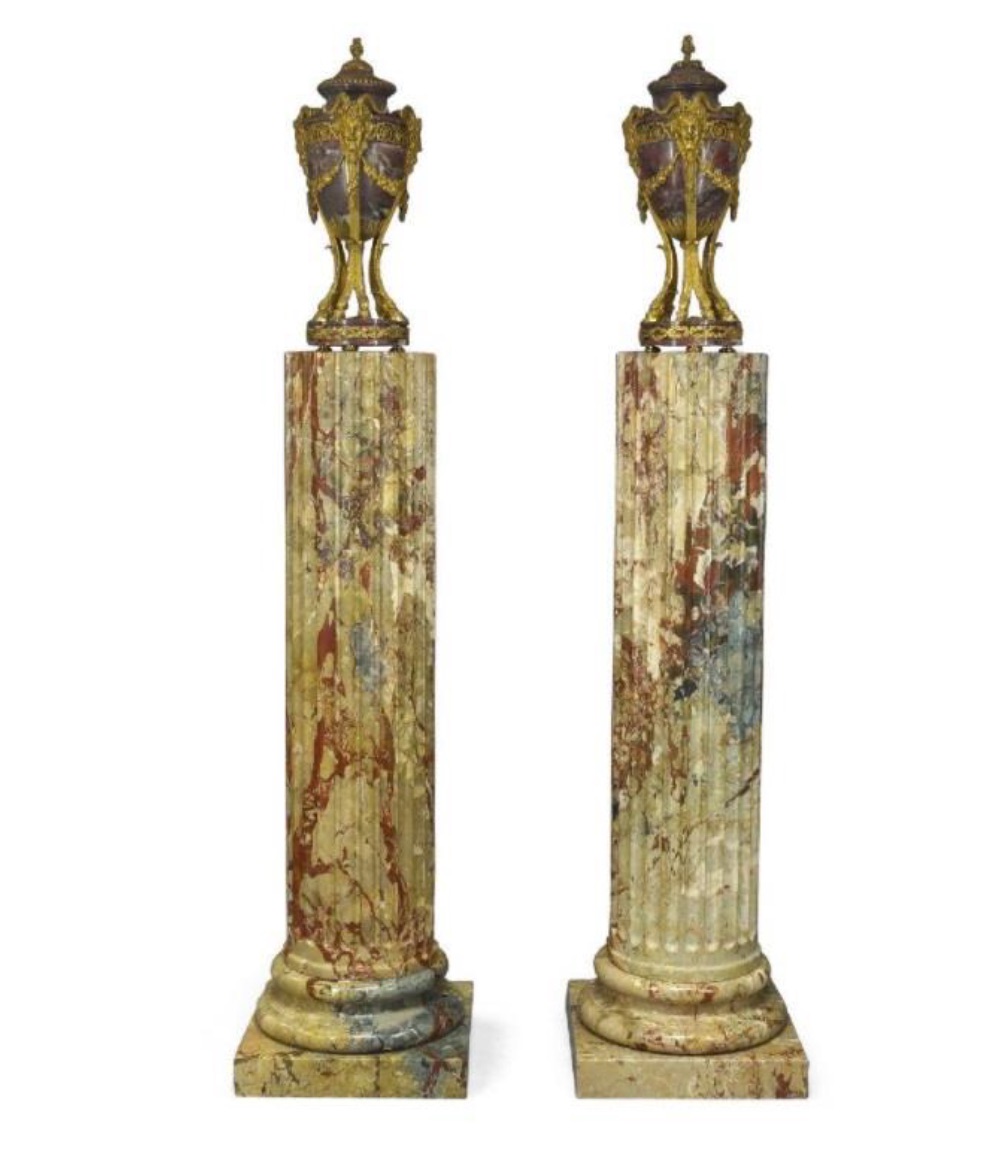 A quirky table mirror with an exotic twist has been entered into the sale at £500-700. The Italian carved walnut table mirror was created in the mid-19th century, of architectural form with fluted columns wrapped with foliage and a palm tree. 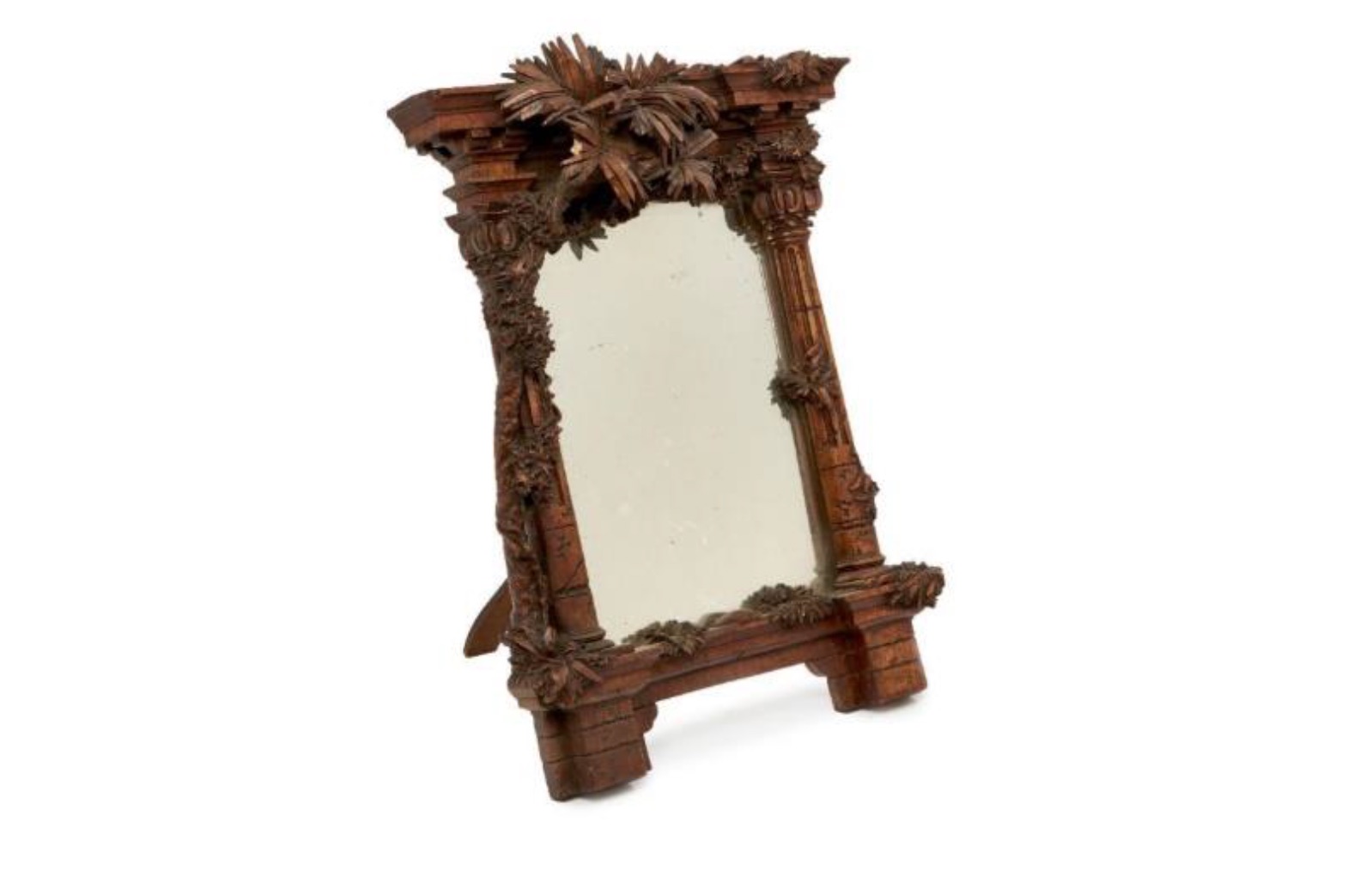 A beautiful French Louis XVI style marble and gilt-bronze mounted lyre clock formed in the late 19th century. The clock is complete with a swinging paste-set bezel to white enamel dial with Roman chapters, it’s twin barrels movement strike on bell. It is estimated to make £500-700. 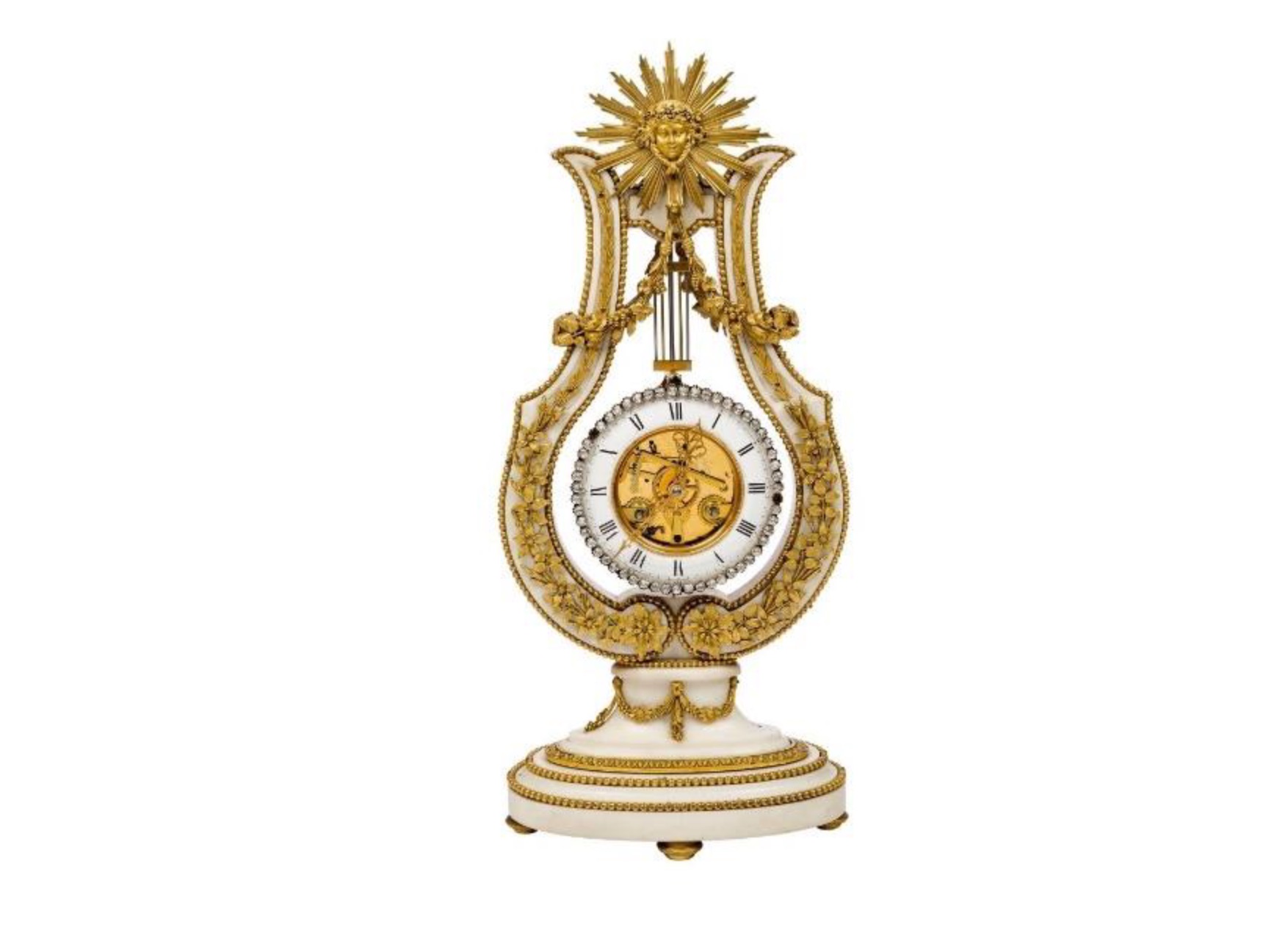 A Louis Vuitton suitcase together with a small trunk, both covered in LV monogrammed fabric, bound in leather and brass are also on offer within the auction, estimated to make £1000-1500. Inside the small trunk are three riding hats, a pith helmet and a Louis Vuitton monogram canvas hat box. The luxury brand always attracts interest within the Fine & Decorative auction due to the quality of the products and the prestige of the name.

A collection of three beautiful 17th century stumpwork pictures. Stumpwork was fashionable from c.1630 to the late 1680s and was seen as the most difficult embroidery technique to master by young women. It gained its name in later years, after the wooden padding sometimes used. Its raised and padded style was an extension of the method used especially in Germany and Hungary to sew heraldic and church vestments. Stitches are worked around pieces of wire to create individual shapes such as leaves, insect wings or flower petals. This is then applied to the main body of work by piercing the background fabric with the wires and securing tightly. These examples celebrate the best of English embroidery of the 17th century. 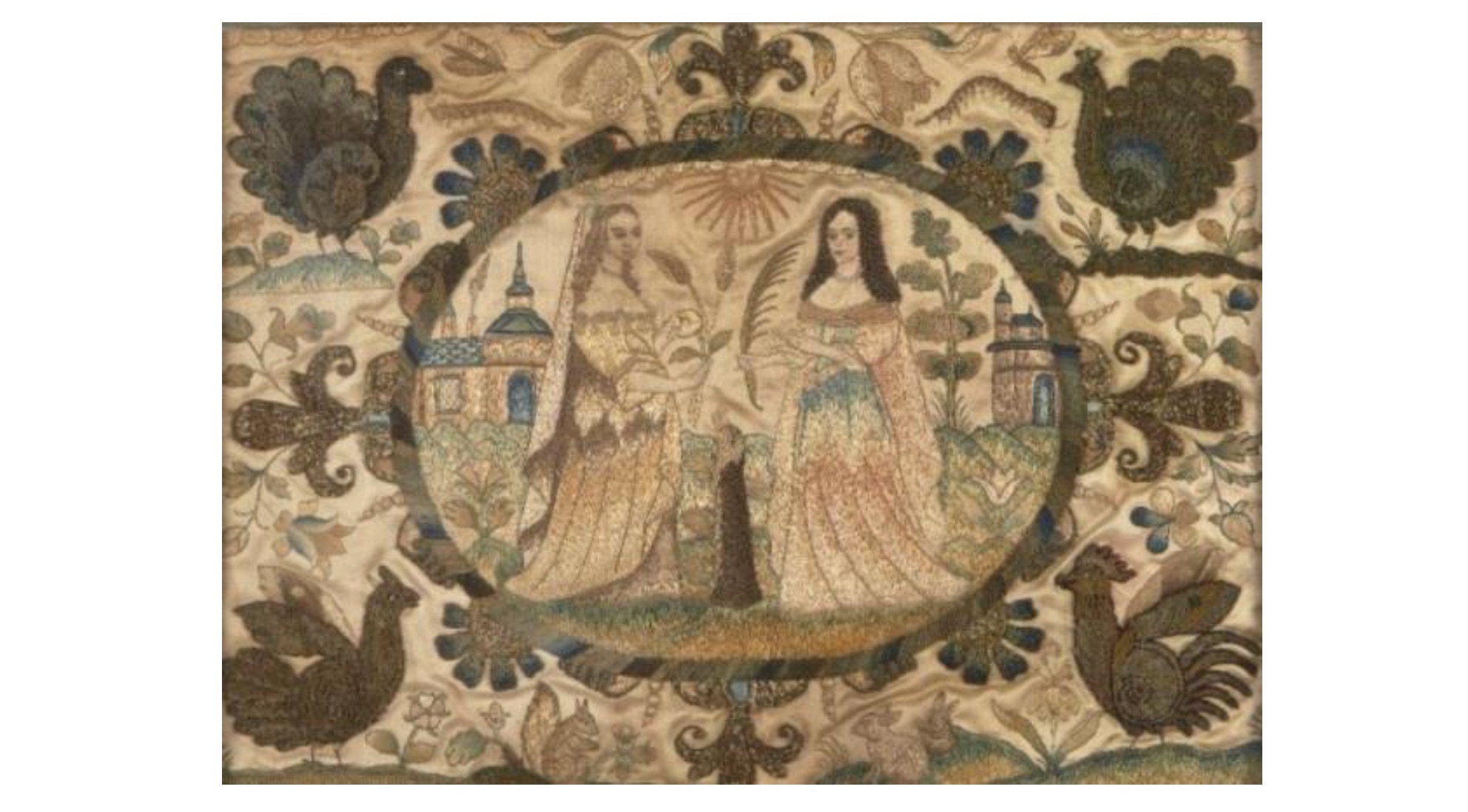 Estimated to make £2500-3500 is a Regency mahogany library table in the manner of Gillows, the renowned British furniture manufacturer. The elegant table is inset with a green leather writing surface, with two frieze drawers and two opposing drawers and finished off wonderfully with carved lions paw feet and casters. 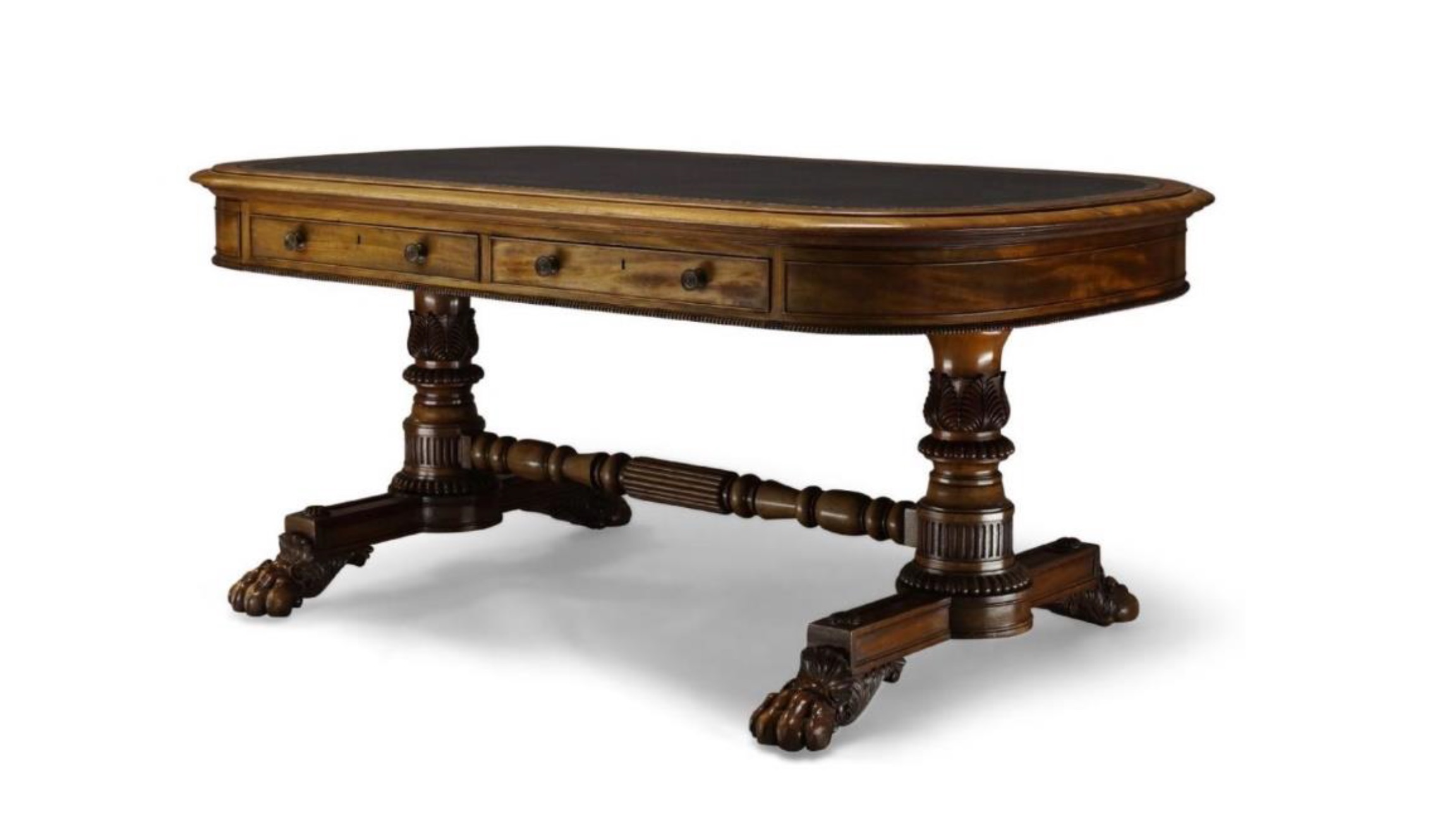 Another piece of furniture that is an early 20th-century Italian pietra dura inlaid specimen marble centre table, estimated to make £600-1200. The circular specimen marble top centred by a classical head is raised on a mahogany and gilt metal mounted base, with four curved supports terminating in gilt metal boar heads, to quatrefoil base. It a lovely and striking example of the technique of pietra dura, that first appeared in Rome in the 16th century, reaching its full maturity in Florence. 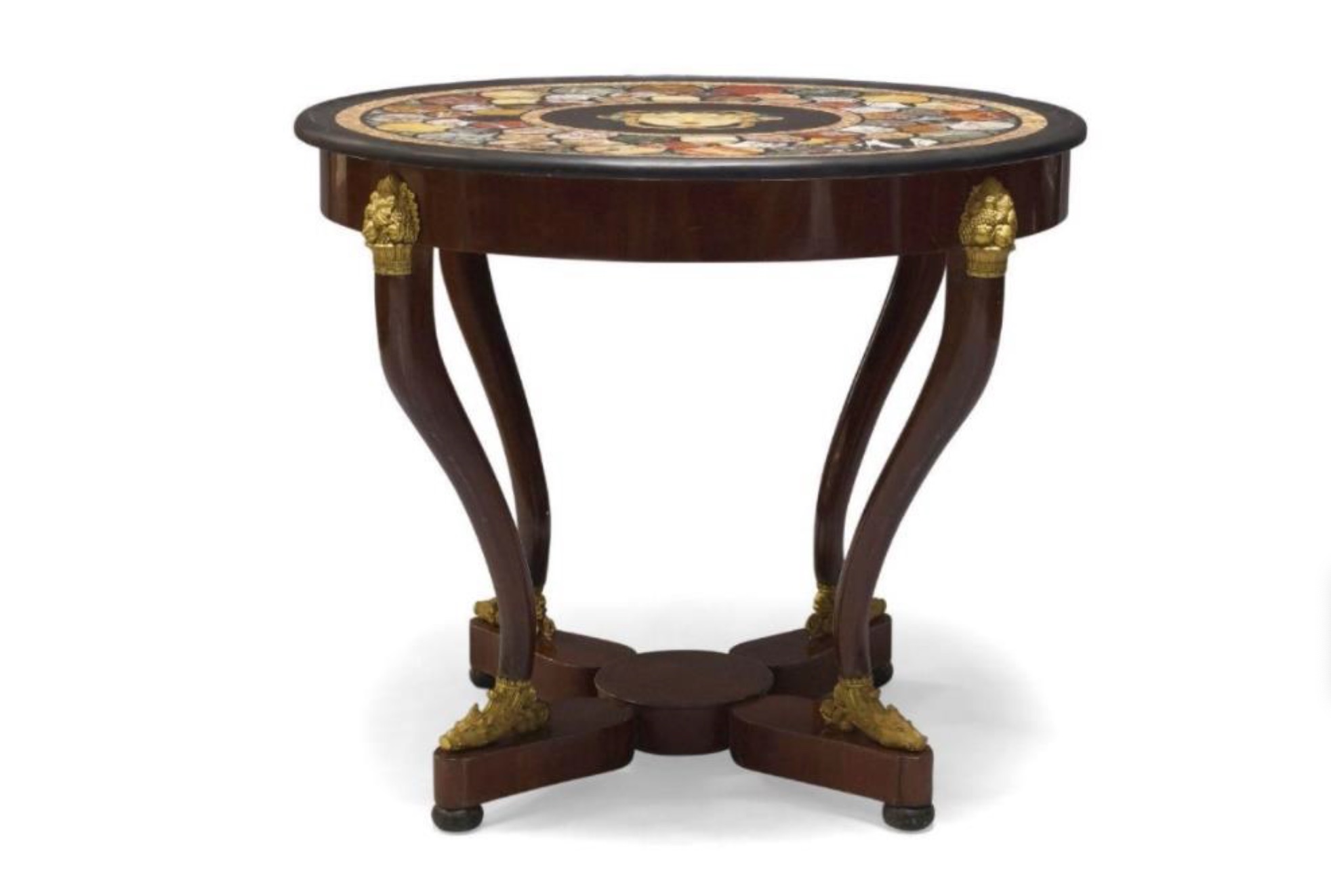 A pair of Queen Anne Britannia silver candlesticks, created in London in 1709 by Thomas Merry. Considering these candlesticks are over 300 years old, they are in very good condition and are lovely pieces of tableware. Britannia silver has a higher purity (958) than sterling silver. As a result of the Great Recoinage scheme of 1696, which was intended to improve the standard of English currency, William III ordered that Britannia silver was to become the standard for silver in England. This did not last long, only until 1720, so these candlesticks represent a short and interesting chapter in British history. They are expected to make £1,000 – 1,500 at auction. 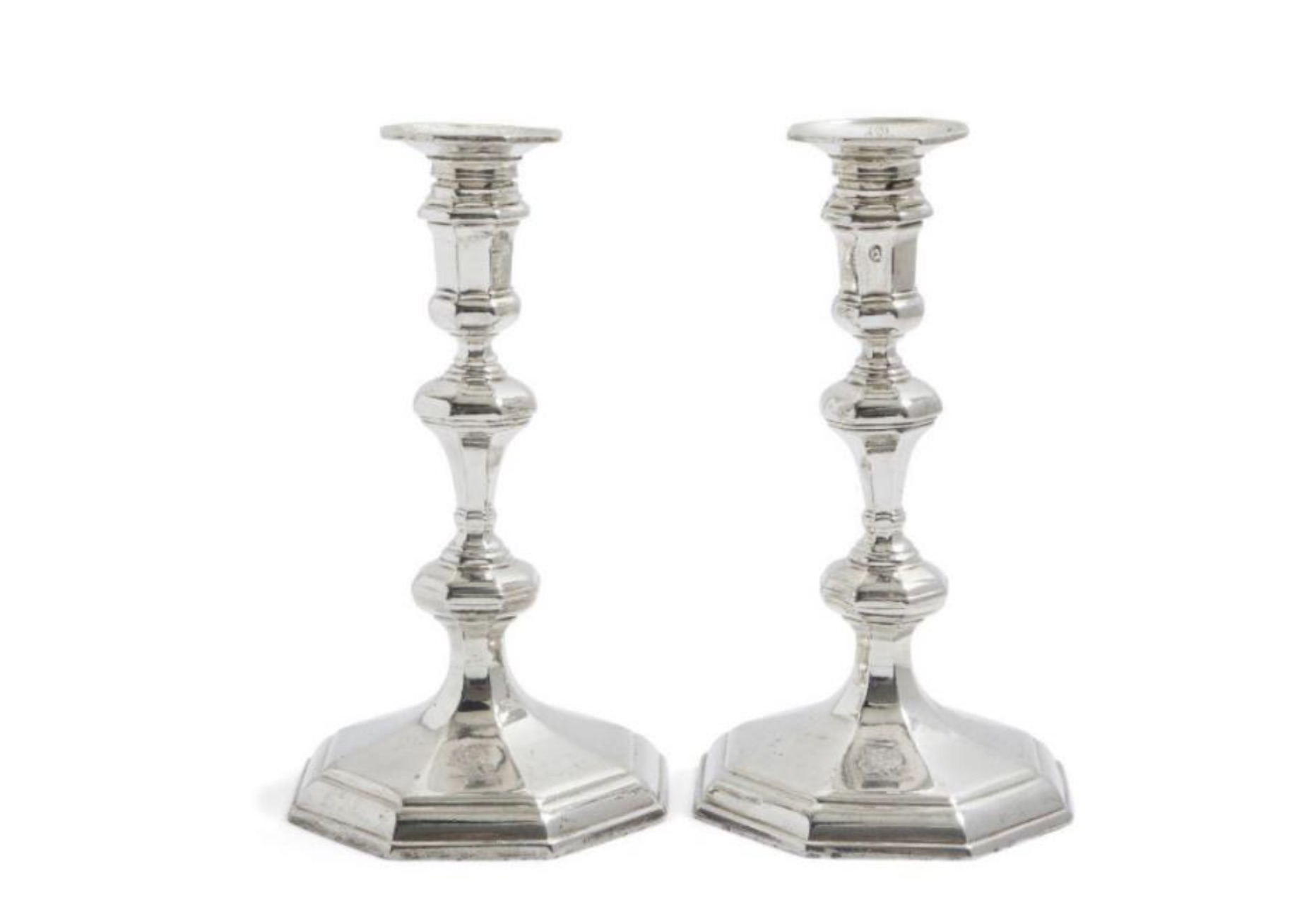 Two wonderful 19th century Russian silver salt thrones, one Moscow, c.1866, assay master Victor Savinkov, maker’s mark for Alexei Osipov, the second throne Moscow, c.1869, assay master A. Svechin, maker Alexander Mukhin. Both are of traditional form, with the hinged seats engraved with the words ‘без соли, без хлеба половина обеда, meaning lunch without salt and bread is only half a meal. Salt occupies an important place in Russian culture and as such, dipping bread in salt at weddings remains a tradition practiced by many couples today. In bygone times, visitors were often welcomed into a house with a piece of bread and salt, which symbolised health and prosperity. In ancient and Medieval Russia, salt was an expensive commodity and was saved for special occasions, which makes these thrones even more special. They are expected to make £1,000 – 2,000 at auction.

Ending the highlights within the sale is a Russian silver and champlevé enamel ‘izba’ design box, created in 1892 in Moscow by Gustav Klingert, assay master Lev Oleks. Raised on four square feet, the lid and sides are cast to resemble geometric patterns of woven birch, and the lid is decorated in traditional izba style and enamelled thumbpiece. Estimated to make between £1,500 – £2,500, this is a lovely trinket box, beautifully decorated with enamel and designed to resemble a traditional Russian rural dwelling. The maker, Gustav Klingert, was born in Germany but began his career working as a master for Fabergé. In 1865 he founded his own factory in Moscow and it was later described as one of the most important firms in Russia.