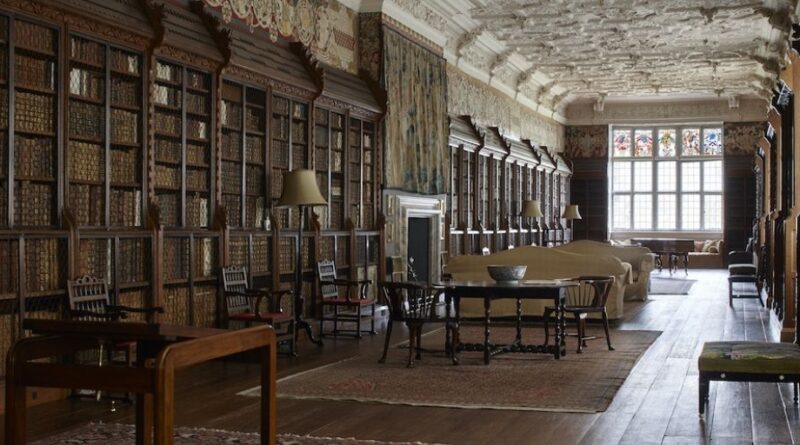 Historic settings from some of the UK’s best-loved historic libraries and offices can be used to create impressive backgrounds for use on virtual meetings and calls as the National Trust releases six free downloadable images.

Users of video communications platforms such as Zoom can transport themselves to some of their favourite interiors and dial into meetings and calls from locations including Vita Sackville-West’s writing room in the tower at Sissinghurst Castle in Kent and the Trust’s largest library at Blickling in Norfolk, each side lined with 123ft of books.

It was in her atmospheric writing room that poet and writer Vita Sackville-West penned novels, reviews and gardening books. She rarely invited in visitors and even her sons ventured into the room only a few times during her lifetime. In this room, after Vita’s death, one of her sons discovered her locked Gladstone bag containing over 80 pages of autobiography that discussed her same sex love affairs, including with fellow writer Virginia Woolf.

Blickling’s astonishing library holds more than 12,500 manuscripts and printed books, among them the Eliot Bible, one of the first books ever printed in British North America. It was written in Wôpanâak, a lost language now being revived with the help of this publication.

Other learned, book-filled backdrops on offer include Agatha Christie’s library at Greenway, home to 4,000 books, some with inscriptions from friends like P.G. Wodehouse; and the grand library at Wimpole Hall in Cambridgeshire, whose collections include a copy of Rudyard Kipling’s Kim taken on Captain Robert Scott’s ill-fated attempt to reach the South Pole.

The library at Townend, Cumbria, provides a more modest backdrop. But this small library, built up by generations of yeoman farmers, contains 45 entirely unique books which have not survived anywhere else in the world.

The quirkiest backdrop is provided by the ‘Office of the Caretaker of the Electric Light’ at Cragside, Northumberland, the first house in the world to be lit by hydroelectricity. In this wood panelled room, surrounded by levers, dials, switches and pipes, Victorian inventor Lord Armstrong’s electric light caretaker ran the Power House. A telephone was provided to keep him in direct contact with the house, to ensure electricity was supplied when needed.

Assistant Curator Katie Knowles said: “With many still working from home, we wanted to help people bring a touch of history and beauty to their virtual meetings and catch ups.

“When the lockdown in England ends we’ll be reopening as many houses as we can – in the meantime we hope the new backgrounds will help people to remember the places they love and to share them with colleagues and friends.”

More backgrounds, focusing on different themes, will be available in the coming weeks.