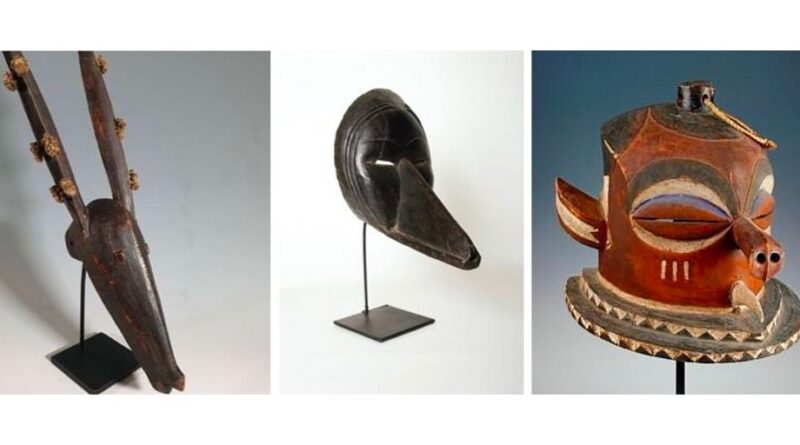 Tribal Art London will unveil its third in a series of curated, commercial online exhibitions on December 3, with Spirit Animals running until January 10, 2021. The exhibition involves all the dealers who would have been present at the physical 2020 Fair, postponed until September 2021 due to the pandemic.

With over 100 objects on sale from leading international tribal and ethnographic dealers, Spirit Animals will be the largest online selling exhibition to date hosted by www.tribalartlondon.com in place of the fair.

The virtual fair will be accompanied by an E-catalogue which includes articles on the ritual use of animal forms and a piece by Marc Assayag, dealer and author, discussing his book, The Stars Are Eyes, about the masks of the Abelam of East Sepik Province, Papua New Guinea.

Spirit Animals explores the relationship between man and beast and the expansive use of animal form in rituals and culture. In the early rituals of many cultures across the world it was the innate behaviour of animals that was seen as beneficial for humans to mimic. The snake sheds its skin, reborn and living on forever; rams butt heads while fighting for a mate and are represented in art conveying masculinity and fertility; leopards, as one of the few hunters of humans, were associated with government and the ability to control the lives of the people. Fierce fighters, the baboon alongside monkeys were commonly depicted in masks and sculpture: with their human features it is no surprise that they are seen as an invitingly familiar form to shift with for ritual purposes.

The choice of animals for depiction can be puzzling: lions, rhinos, zebras and giraffes which most of us associate with African savannah landscapes are scarcely ever depicted in African ritual objects. Instead it seems the most popular animals are those that have transformative qualities – physically or behaviourally. Perhaps this is why the pangolin, one of the strangest creatures walking the earth, is seen so often in ritual art. A sacred animal, nocturnal and covered with fish-like scales, not only are parts of its body integrated into ritual objects, the iconography of its form is abstracted and applied as a design to masks, headpieces and clothing.

Buffalos are depicted in multiple cultures’ rituals, their method when being hunted of double backing and attacking from behind, disappearing for much of the day in the long grass combined with their crepuscular lifestyle makes them an enigmatic animal likened to witches. For the Tabwa people of Zaire the buffalo is an important animal to the chiefs of the community. The chief, like the buffalo, must be strong; a mystery, watching but never seen to be obvious or biased in his decisions.

In Mali, the Dogon tribe are animist with a variety of animal-inspired masks: the fox represents disorder and disobedience within the world and is considered the enemy of water, fertility, and civilization.

Animals that inhabit multiple landscapes such as land, air and water are seen as important with special powers.

Birds represent the bringing of fertility not unlike the western view of the stork. The lowly hen conveys maternity, hospitality and sacrifice. An Asante saying related to law and punishment is “the mother chicken does not stand on her chicks to kill them but to guide them along the correct path”.

The crocodile is called the ‘lion of the water’ by the Tabwa due to the efficiency with which it kills. The crocodile’s habits are erratic, still and quiet while in water and then a sudden flurry of aggression and power. For the Ijo the crocodile is revered as a water spirit which they believe are like humans in having personal strengths and shortcomings and that humans’ dwell among the water spirits before being born. The Ijo have a great affinity with water – they are related to the founders of the Great Nile Valley civilization

complex (and possibly the Lake Chad complex). Traditionally, the Ijo hold celebrations to honour the spirits, lasting for several days. And the highlight of the festival is the role of masquerades: here, men wearing elaborate outfits and carved masks dance to the beat of drums and manifest the influence of the water spirits through the quality and intensity of their dancing.

The dog, one of the most universally loved animals, has a mixed reputation throughout Africa. The Kongo people believe the dog to have two sets of eyes, one for this world and one for the next, giving them the ability to pass messages back and forth from the living to the dead: running over a dog is as bad as striking a person. The Minyanka people of Mali sacrifice dogs as a dog’s blood like a human is considered bitter and the nature of a dog like a human, vengeful. The ritual therefore must be carried out very carefully to avoid the negativity of the sacrifice reverting on the sacrificer.

Tribal Art London’s Spirit Animals exhibition will feature works for sale from respected dealers in the field of tribal art including Bryan Reeves of Tribal Gathering and other UK-based exhibitors including Cordelia Donohoe, specialist in ethnic jewellery, textiles and adornment; Joss Graham, well-known London dealer in ethnographic textiles, particularly those of India and Africa, and works of art; Sam Handbury-Madin, a young, third-generation dealer with wide-ranging tastes; Kenn MacKay, with a special focus on American Indian art; David Malík focusing on the material culture of Central and Western Africa; Kezhia Orege with tribal adornment, Tom Hurst a young but already impressive dealer and Ian Shaw, a specialist in African art and textiles.

From overseas is Jeremy Sabine (South Africa), specialist in South African artefacts; Rob Temple (Belgium) with objects from Africa, Asia and Oceania, and Frans Faber (Netherlands) with art from Indonesia, Oceania and Africa.

Tribal Art London fair is an important focal point for international and UK collectors. It is renowned for offering an exciting diversity of works for sale with prices ranging from the low hundreds to over £20,000. The event attracts dealers, art institutions and private buyers from across the world.