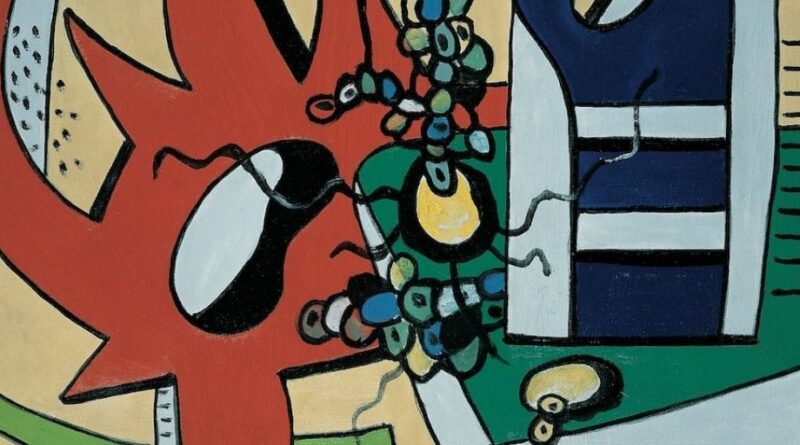 Pallant House Gallery is widely known for its remarkable collection of Modern British art, however the Gallery is also home to a significant international collection. The exhibition will include works by prominent artists whose works are not well represented in British museums – offering visitors a rare chance to see works by these artists in the UK.

Among them will be works by Cubist artists, such as André Derain’s watercolour, Nature Morte au Pichet de Grès / Still Life with Stoneware Jug (1910), a study for one of the most important paintings from Derain’s Cubist period that is now in the Musèe d’Art Moderne de la Ville de Paris. The only painting in a UK collection by Emil Filla (1882 –1953) will also be on display, Homme assis tenant un journal / Seated Man reading a Newspaper (1920), which depicts a man reading the British newspaper The Telegraph.

Pallant House Gallery also holds two of only four works in UK museum collections by the Cubist artist Jean Metzinger (1883 – 1956), both of which will be on display: Le Village / The Village (1910s) and L’Echafaudage / The Scaffolding (c.1915-16).Also on show will be Fernard Léger’s bold 1939 oil painting L’Engrenage Rouge (Nature mort en rouge et blue / The Red Gear (Still Life in red and blue) (1939) – a variant of a mural Léger painted for the New York apartment of Nelson Rockefeller, now in the Museum of Fine Arts in Houston.

The exhibition will also feature works by German artists of the Bauhaus School such as Paul Klee’s watercolour Bëwolkung / Clouds (1926), Georg Muche’s Komposition in Vier Akzenten / Composition in Four Accents (1920), as well as portraits by Bauhaus-trained Grete Marks. Pallant House Gallery houses a substantial collection of works by Hans Feibusch (1898 – 1998), the last surviving artist of the infamous ‘Degenerate’ Art Exhibition organised by the Nazis in Munich in 1937. Feibusch’s 1946 work Narcissus will be on show along with examples of his lithographs from the 1930s.

Further lithographs by Henri Matisse, Raoul Dufy, Léger and Georges Braque will also be on show, all of which were created for the ‘School Prints’ scheme, devised by campaigner Brenda Rawnsley to introduce British school children to original prints by international modern artists in the post-war years.

The exhibition will also explore how, in the Post-war period, Abstraction was disseminated from Europe to Britain and  North America. On display will be examples of Abstract Expressionist work by American artists Sam Francis, Norman Bluhm and the Canadian ‘Automatist’ Jean-Paul Riopelle which will be shown alongside works by some of their European contemporaries including Hans Hartung, Pierre Soulages and Eduardo Chillida.

Degas to Picasso: International Modern Masters will present Pallant House Gallery as a ‘collection of collections’ exploring the fascinating stories behind the lives and acquisitions of the individuals whose collections have been generously donated to the Gallery for the British public to enjoy.

Among them, Gladys Deacon, Duchess of Marlborough, a famous socialite who charmed high society and whose admirers included Marcel Proust. A charcoal drawing by Degas she once owned, ‘Femme se Peignant’ will be on show. Deacon acquired the work from French Dealer Ambroise Vollard who himself had brought the work directly from Degas. The drawing demonstrates the profound influence of Degas on British artists, including his friend Walter Sickert whose work Jack Ashore (1912) is also included in the exhibition.

Passionate and prolific collector Michael Woodford, a former refuse collector and school caretaker, came from humbler origins but also built up a substantial collection over his lifetime, including works by Pablo Picasso, Henri Matisse and Suzanne Valadon which will be on display. Woodford was inspired to bequeath his collection to Pallant House Gallery after visiting in 2003. He spoke of collecting ‘with love’ and hoped that visitors might derive the same pleasure from his collection that he had enjoyed.

Also included in the exhibition are significant works from the collections of the architect Peter Collymore; Walter Hussey, Dean of Chichester Cathedral; Charles Kearley, a keen collector of International Modernist works; abstract artist George Dannatt; journalist and criminologist Elizabeth Burney; and Jeremy, Lord Hutchinson, who was involved in many of the defining trials of the 20th century, including the Lady Chatterley censorship case.

Director Simon Martin commented: “Visitors to Pallant House Gallery will know our wonderful collection of Modern British art, but our international holdings will be a surprise to many. Whilst it is harder for our visitors to travel to museums abroad this winter, it is a great opportunity for us to celebrate over 100 years of international modern art from the French Impressionists to American Abstract Expressionism, and also the generosity of the collectors who have gifted and bequeathed their works to the British public.”