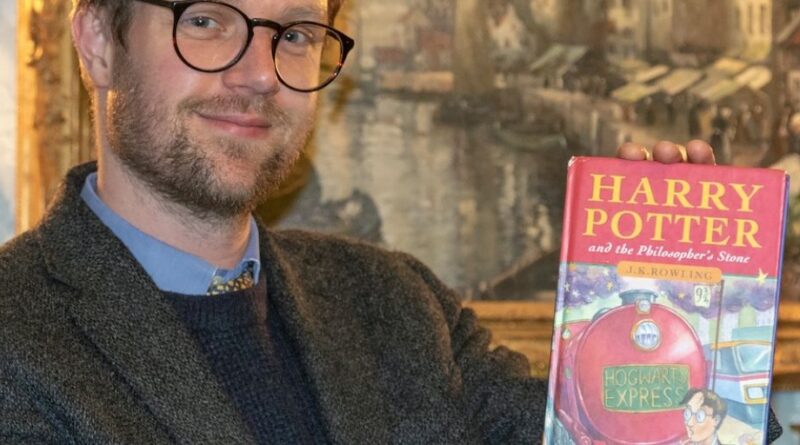 A rare Harry Potter first edition, destined to be sold at a car boot sale with a 50p price tag, could sell for £50,000 thanks to a stroke of luck.

And that means one of the best Christmases ever could be on the way for 59-year-old Blackpool mum Karen Rumsey, her bride-to-be daughter Charlotte, 28, from Preston, and sons Callum, 27, a bricklayer now living in Rugby, and IT specialist Cameron, 25, who also lives in Rugby.

Charlotte had been helping her mum clear out items in her home when they struck gold – a first issue hardback copy of Harry Potter and the Philosopher’s Stone, one of only 500 in the first print run published by Bloomsbury in 1997.

But they have been so shocked by the discovery Charlotte said they were still pinching themselves: “Things like this don’t happen to normal families like us. Our friends are delighted for us.”

The book is due to be sold by Hansons Auctioneers on December 11. The last Philosopher’s Stone hardback first edition sold by the Derbyshire auction house in October 2020 sold for a hammer of £60,000.

Charlotte, who has just qualified as a solicitor, said: “I’d been helping mum have a clear out during lockdown as she’s downsizing. We’d put lots of things aside for a car boot sale in Blackpool including the Harry Potter book which we’d had since 1999. A friend of the family gave it to us for me and my brothers to read as they thought we might enjoy it.

“I put it in the 50p book box without a second thought but, soon after, I just happened to see the Antiques Roadshow on TV. Someone had taken along some rare Harry Potter books and the experts said they could be worth £13,000. I thought maybe we might have a first edition and rang mum to ask her to double check our book. She took it out of the box and I began reading out the issue points that identify it as first edition. As she turned the pages to check each one, everything seemed to be exactly the same.

“We still couldn’t believe it so we contacted Hansons. Their expert Jim Spencer confirmed it was a genuine first edition. We’re so excited. Mum moved to Blackpool in 2003 and can’t believe she has had such a valuable book sitting on her bookshelf all that time.

“We’ve all flown the nest now and I’m due to get married in 2022. My fiancé Kyle Gillies, a teacher, is a huge Harry Potter fan. We actually offered him the book before we put it in the car boot box but he said no as he had plenty.”

Jim Spencer said: “This is the fifth hardback first issue of Philosopher’s Stone I’ve uncovered in 18 months, and I’ve just discovered another two – only 493 left to find! Of the 500 copies printed, 300 went to schools and libraries – so this is a good example of one of the scarcer 200 that went to shops. I’m delighted for the family. Charlotte said she was hopping about, and the hairs stood up on her arms, when she received my call confirming it was a first issue.”

Nevertheless, Charlotte and her mum pondered whether to sell: “We were a bit half-hearted about selling at first but I’m getting married, mum’s downsizing and there’s no time like the present, particularly after the year everyone has had. We’ve decided this has happened for a reason and we’re grabbing the opportunity with both hands.

“We still can’t believe what the book’s worth. I don’t think my brothers are taking it seriously yet. I daren’t post the book to Hansons like the seller from Luxembourg. I had to deliver it myself. We will be on edge before the auction but fingers crossed it will do well.”

The book is due to be sold on December 11 in Hansons’ Library Auction at Bishton Hall, Staffordshire. The auction will include another hardback Philosopher’s Stone copy, one of the original 500 published in 1997. The badly damaged ex-library copy from Edinburgh was bought at a table top sale 15 years ago by its owner.