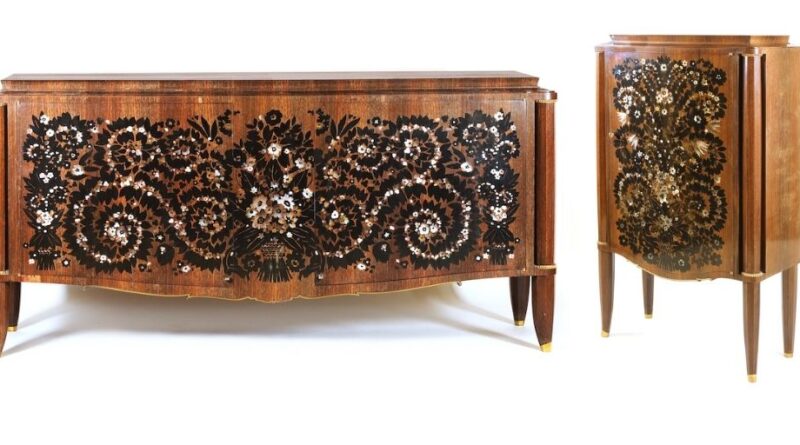 The ten lots represented in Sworders‘ sale on January 26 will be one of the largest groups of pieces by Leleu to come to market in recent years.

They have been consigned to Sworders by the Greek descendants of Celestine Galani, the wife of shipping magnate, John Galani, who was a friend of Leleu. Based less than a mile away from the Maison Leleu, which was at 65 Avenue Franklin Roosevelt in Paris, Celestine commissioned him to decorate her entire apartment at 81 Avenue Marceau in the 1940s.

Born into a family of artisans and artists in Boulogne-sur-Mer in Northern France, Jules Leleu was one of the fathers of French Art Deco design. He exhibited at the prestigious ‘Exposition des Arts Decoratifs’ in 1925, the event that gave Art Deco its name and designed the chairs for the Grand Salon and the Music Room.

His commissions included the ocean liners Ile de France and the famed and ill-fated Normandie plus a dining room for the Elysée Palace, and the Grand Salon des Ambassadeurs at La Societé des Nations in Geneva, called the Salon Leleu.

The ten lots in the sale, that arrived in Stansted Mountfitchet from the Mediterranean just before Christmas, include a ‘Feux d’artifice’ (Fireworks) pattern rosewood and marquetry cabinet and commode.

Inlaid in ebony and mother-of-pearl marquetry and applied with gilt bronze, these bear comparison with the better-known work of contemporary Émile-Jacques Ruhlmann. They carry guides of £10,000-15,000 and £20,000-30,000 respectively.

Similar in style is a cocktail cabinet, the most recognisable of all Art Deco furniture forms, that is inlaid with rosewood parquetry veneers and a bouquet of flowers in ebony and mother-of-pearl. Fully signed it is expected to bring £4000-6000. 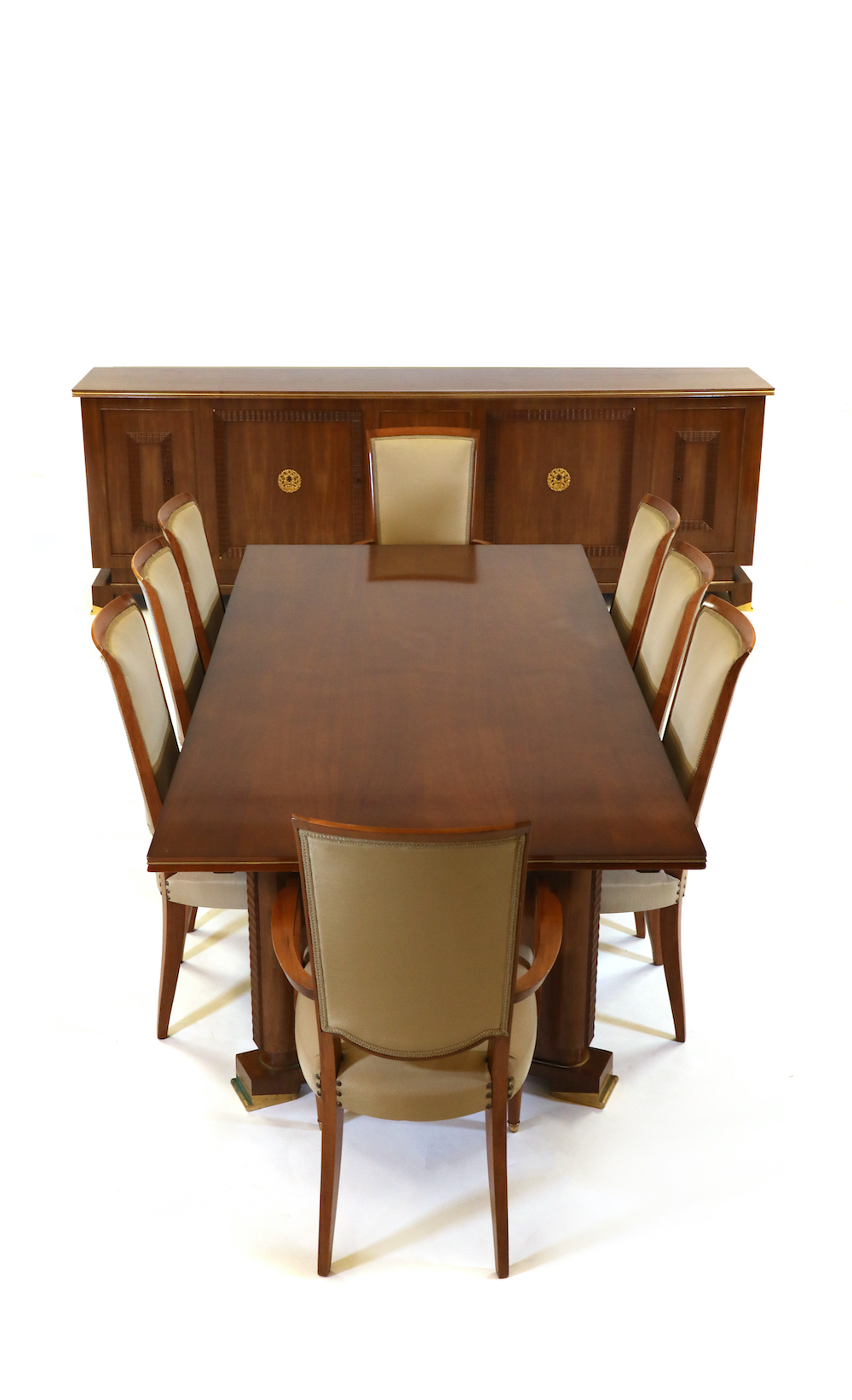 Offered as a single lot with an estimate of £12,000-15,000 is a complete mahogany dining suite comprising a table, eight chairs and a monumental sideboard set with stylised floral gilt bronze mounts.

Sworders’ forthcoming Design auction will also include a 1980s ‘microgauze’ wall hanging by the British artist-weaver Peter Collingwood (1922-2008). The linen and steel rod ‘sculpture’ guided at £4000-6000 is the third the saleroom has offered in as many sales.

The latest Collingwood piece titled M143.74 dates from c.1988. It is sold with a facsimile of a letter dated March 24, 1989 explaining it was a gift to the recipients ‘John & Madoka’ from the Japanese weaver Jun Tomita (b.1951). Collingwood apologies for a delay in sending it: ‘I am afraid I have taken rather a long time to get it woven as I have been travelling in India. There is a nylon loop at the top of the hanging – so it only needs one nail in the wall to hang it from.’

Courtesy of a postscript, the letter also sheds a little light on the numerical titles that Collingwood gave his works. He writes: ‘The metal label [impressed Paul Collingwood M143.74] shows it is design M143 & that it is the 74th time I have woven this design.’

Collingwood was at the cutting edge of weaving for 50 years. His ‘microgauze’ hangings pushed forward the ancient craft of weaving to create these bold visual abstractions that are admired worldwide. Trained after national service by the master weaver Ethel Mairet, he first worked with Alastair Morton at the Edinburgh Weavers before setting up studio at Archway in North London in 1952. Selling his work in Liberty’s and Heals, he later worked at the Digswell Arts Trust in Hertfordshire (alongside the potter Hans Coper) and from 1964 in Nayland near Colchester.