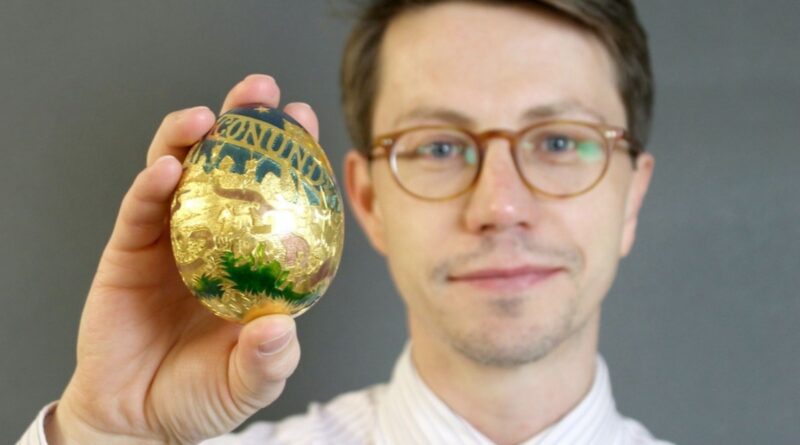 An auction house is celebrating after selling a rare Cadbury’s golden egg for the second time for another record-breaking price.

Batemans of Stamford first sold the Cadbury’s Conundrum egg three and a half years ago for a record-breaking total of £20,640, and recently broke that record when the same egg sold for £37,200.

Many people will remember the great Cadbury’s Creme Egg Conundrum treasure hunt of the mid 1980s where twelve caskets containing a scroll were hidden at secret locations across the country, found through clues hidden in a book written by Don Shaw – the prize for deciphering the clues and finding a hidden casket was a golden egg. What is less well known is that there was a secret thirteenth larger egg in the series, which was awarded to one very lucky Cadbury’s retailer via a private draw for helping with the nation-wide promotion.

This ‘thirteenth’ 22ct gold egg, also commissioned by Cadbury’s from Royal Goldsmiths Garrard & Co, was considerably larger than the original twelve, weighing 323.6g and standing 8.3cm high; it was based on the front cover of the book itself, incorporating elements of each of the twelve riddles.

This month, having returned to Batemans following the sad passing of the previous buyer, and offered as part of the auction house’s specialist quarterly Jewellery & Watches, Silver & Gold Sale, the golden egg smashed its pre-sale estimates of £15,000 – £20,000 and sold to an online bidder for a new auction house record of a total £37,200.

Cadbury’s are currently celebrating 50 years of the much loved Creme Egg with another promotional campaign – the ‘Goobilee’ – and are again hiding golden versions of the Cadbury Creme Egg for consumers to find in-store, giving them the chance to win up to £5,000.

The original ‘Creme Egg Conundrum’ promotional campaign was one of the most successful in British history and the recent record result for the ultimate prize from it shows just how much interest there still is today.

Managing Director Greg Bateman said “We are absolutely thrilled to have sold this unique golden egg for another house record, and are so pleased for the vendors who trusted us to sell the egg for them, especially having had to come to terms with the loss of their father last year who was the first buyer of this egg in July 2017. We hope the new buyer enjoys this incredible piece of confectionary history for decades to come, and we can’t wait to see if any more of the original twelve come to light – any current owners know where to find us!”