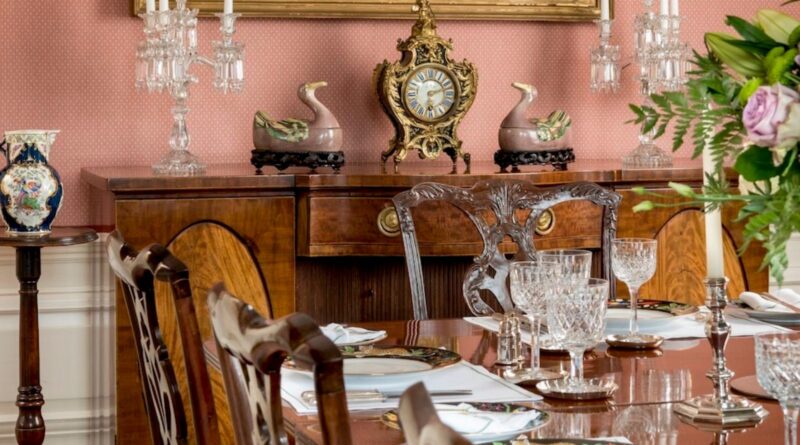 The principal Collection of Mrs Henry Ford II, the wife of the grandson of the founder of the Ford Motor Company, is to be offered by Christie’s across two live sales in New York and London this spring.

Part I of The Collection of Mrs. Henry Ford II, from her Palm Beach home, will be offered in a live sale at Christie’s New York on March 30, followed by Part II, from her English residences in London’s prestigious Eaton Square and her country home, Turville Grange in Buckinghamshire, to be offered at Christie’s London on April 15.

The collection of Mrs. Henry Ford II to be offered this spring, comprises approximately 650 lots and is expected to realise in excess of £3.5 million across both the New York and London auctions.

Highlights of the collection include important impressionist works as well as masterpieces of the decorative arts from the celebrated interiors created by McMillen for Henry Ford II at Grosse Pointe, Michigan in the 1950s; the collection there was considered almost without rival in its own time.

Charles Cator, Deputy Chairman, Christie’s International, said: “The Ford name is not only synonymous with the creation of the modern automotive industry but also with style and collecting on a grand scale. These sales open a window on a golden era, with many of the important works of art acquired in the mid-20th Century during a time of unprecedented opportunity for the discerning collector. Objects appealed not only because of their importance or quality but also for their exceptional provenance; the sale includes works of art from collections such as that of the Duke of Wellington as well as furniture from great English country houses such as Campsea Ashe High House.”

He continued: “Kathleen Ford’s interiors, created in collaboration with architects and designers such as Mario Buatta, David Easton, Sibyl Colefax & John Fowler and Grant White, built on these earlier foundations and are testament to her taste and flair. Christie’s is thrilled to have been entrusted with this multi-faceted collection, which will not only be a highlight of the spring auction season on both sides of the Atlantic, but also offers a glimpse of the private world and personal taste of members of one of America’s most celebrated dynasties.”

The New York auction: The Collection of Mrs. Henry Ford II: Palm Beach on March 30 comprises approximately 250 lots with estimates ranging from $1,000 to $400,000 and includes masterpiece objects, such as a rare George III ormolu-mounted white marble and biscuit-porcelain clock by Benjamin Vulliamy, circa 1791, and important English furniture and works of art by the most pre-eminent craftsmen of the George III period including Ince & Mayhew, William Vile, John Cobb, Matthew Boulton, Pierre Langlois, John Linnell and Thomas Chippendale.

Many of the masterworks come from the former home of Henry Ford II in Grosse Pointe, Michigan – which featured celebrated interiors created in collaboration with the design firm of McMillen in the 1950s. These historic highlights were complemented by the taste of Mrs. Henry Ford II in her Palm Beach home, designed by architect Jeffery Smith, with stunning lighting, silver, porcelain services, entertaining wares, needlework carpets, soft furnishings, modern art and objects of vertu.

The London sale also includes more personal items such as engraved silver from Henry Ford II’s yacht Santa Maria and Henry Ford II’s desk from his study at Turville Grange, as well as a small group of Kathleen Ford’s handbags by makers such as Chanel and Hermès.