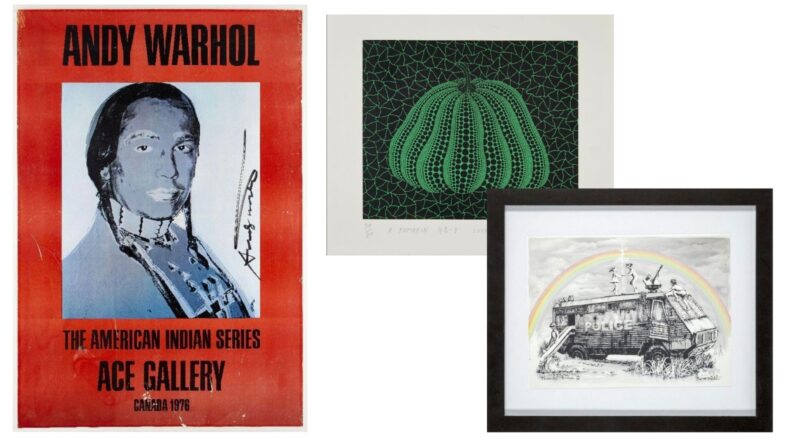 The first Modern & Contemporary Prints & Multiples auction of the year at London auctioneers Roseberys will take place on March 9. This sale has a strong focus in particular on collectible works that are on trend, including works by the Connor Brothers, David Shrigley, Banksy and Takashi Murakami. This sale is ideal for young collectors starting out, as it boasts a large number of high impact and recognisable works from artists such as Andy Warhol, Yayoi Kusama, Terry Frost and David Hockney.

Elizabeth Wormald, Junior Specialist who assisted in curating of the auction commented: “Running themes throughout the sale includes a large selection of prints by pioneering female artist Dame Laura Knight, which are rare to find on the market. They are all beautiful examples of her etching skills, with the majority of the works portraying women from a women’s eye. Elsewhere within the sale, another reoccurring work from the same artist are a wide selection of prints by the prolific English Pop Artist Peter Blake. Lots 262 – _268 is a group focused around YBA women such as Tracey Emin. And as always, we have a solid selection of works by Japanese artist Takashi Murakami on offer.”

Leading the sale are two high covetable pumpkin prints by Japanese artist Yayoi Kusama. ‘A Pumpkin BB-C [Kusama 329’] in blue and ‘A Pumpkin GB-D [Kusama 332]‘ in green. Both screenprint in colour on arches wove were produced in 2004 and come with a provenance purchased from the publisher, Okabe Hanga Shuppan, Kanagawa, Japan. They both come with an estimate of £12,000- £18,000. Yayoi Kusama has consolidated a name for herself for her genius and innovative work. To date she is one of the most highly sought-after artists of her generation. Her aesthetic is perhaps best typified by her pumpkin art such as the lots on offer at Roseberys. 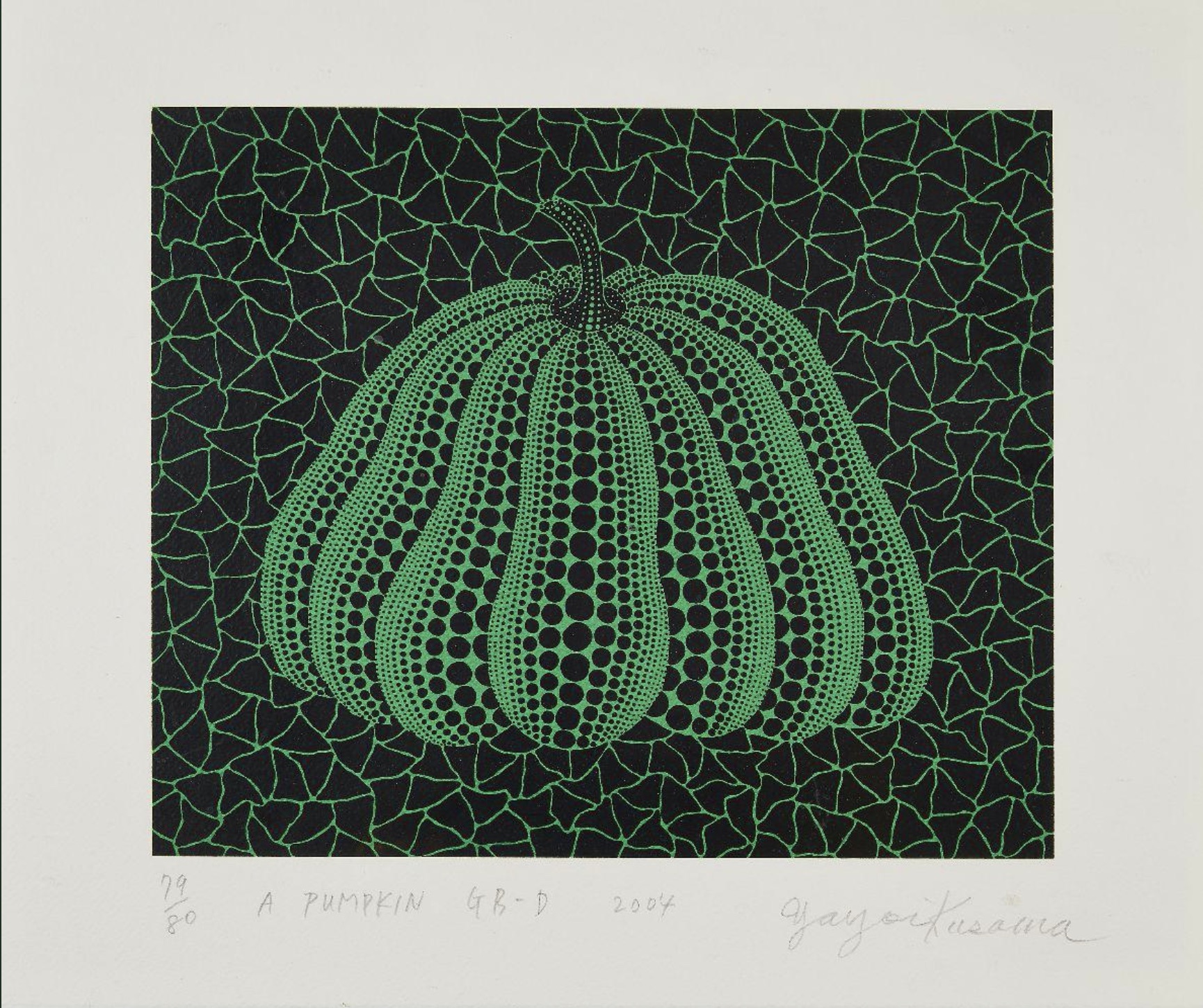 Estimated to make £15,000- £20,000 is a work by elusive British artist Banksy. Titled Police Riot Van (Dismaland Gift Print), the digital print in colours with hand finish on wove, created in 2015 was a one of 52 prints given to employees from Banksy at Dismaland, the temporary art project organised by the street artist in the seaside resort of Weston-super-Mare. The print is accompanied by a Dismaland hi-vis jacket and tin can lid Mickey Mouse ears, worn by the employee during their time working at the park. It also comes accompanied by a bank statement and payslip issued by BM Dismaland Ltd. Elizabeth Wormald, Junior Specialist commented, “Banksy gifted works rarely come up to auction, so it’s great to see this Dismaland print on offer.” 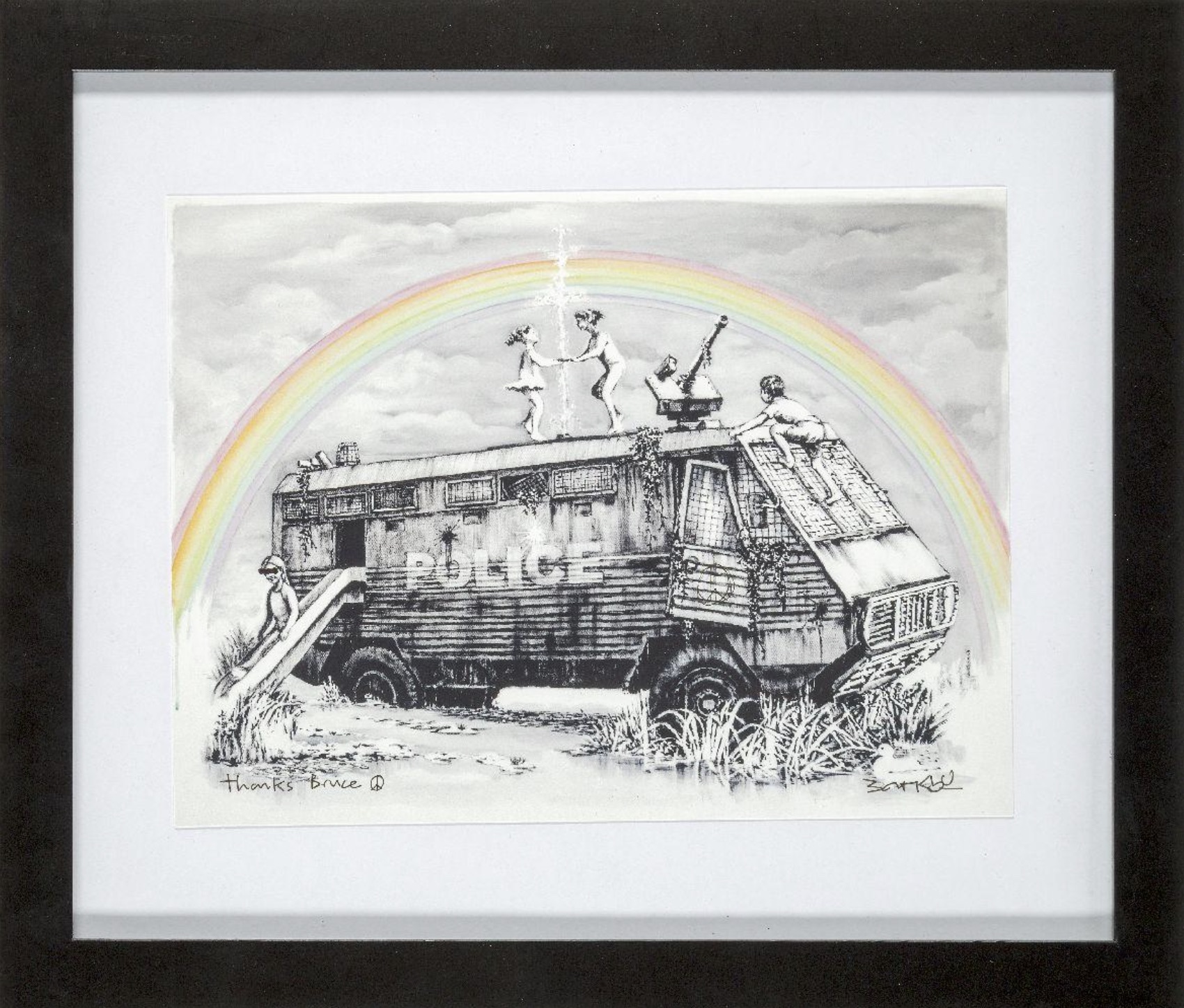 Offered at £2,500- £3,500 is a complete suite of five lithographs in colours by British artist Henry Moore OM CH FBA RBS, 1898-1986. Titled Helmet Head Lithographs [Cramer 356-360], the complete folio was published by Gerald Cramer, Geneva, in 1974-75. Moore is one of the most significant British artists of the twentieth century best known for his semi-abstract monumental bronze sculptures which are located around the world as public works of art. As well as sculpture, Moore also produced many drawings, along with other graphic works on paper such as the lots on offer. 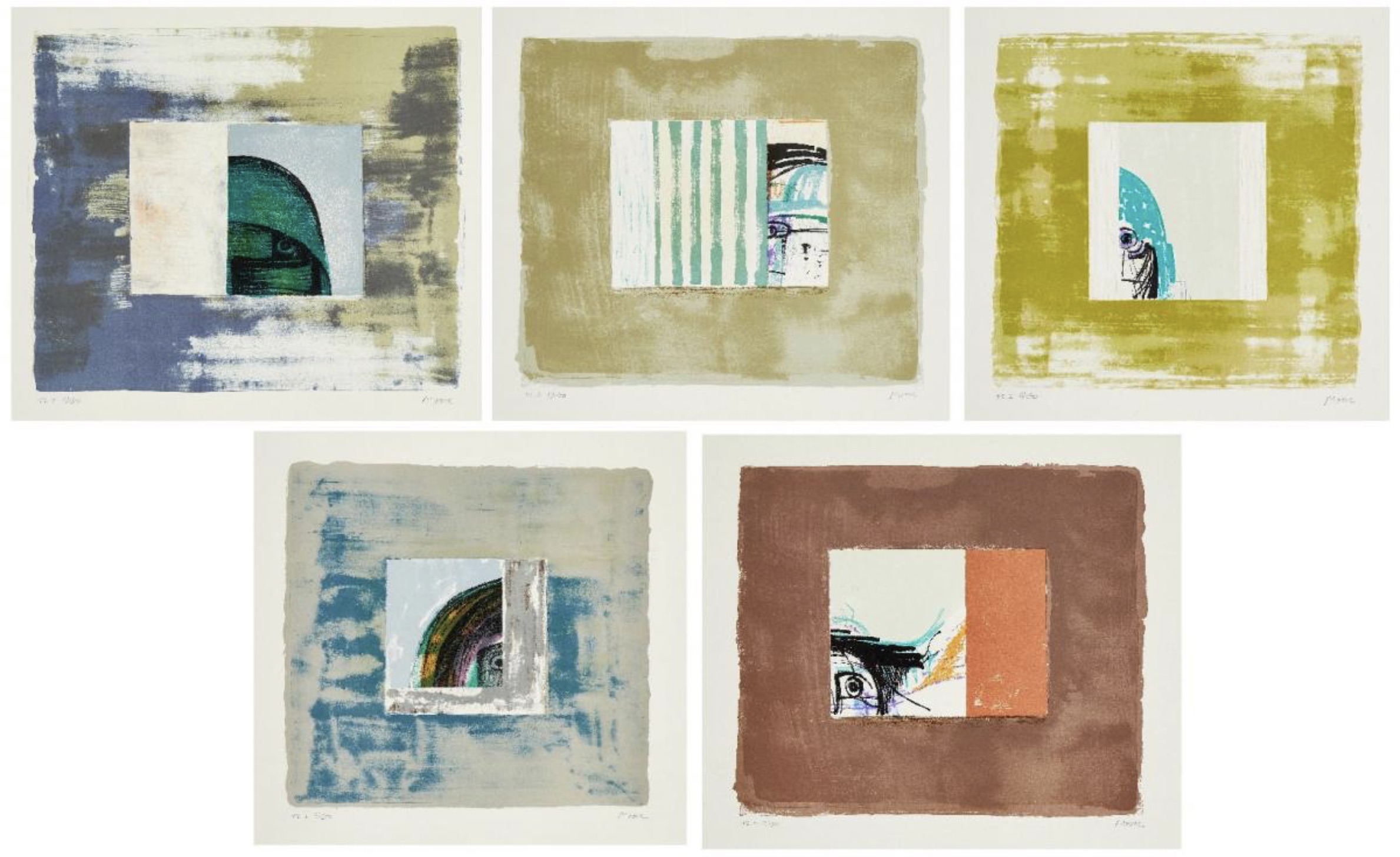 Unique work by The Connor Brothers, titled The Preceding Accumulation of Emotional Distress created in 2020 for their lockdown series; is offered at £2,500- £3,500 within the auction. The unique mixed media collage, digital print, crayon and hand-finished acrylic on wove comes with a provenance from the Artistan Gallery, 2020. The Connor Brothers are best known for their paintings and prints featuring vintage pin-up beauties and Old Hollywood starlets such as the lot on offer. The Connor Brothers – a pseudonym for the British artists Mike Snelle and James Golding – initially retained anonymity under their fictional guise. They posed as fictional twin brothers Franklyn and Brendan Connor, who had escaped from a Californian cult (called ‘The Family’) by running away to Brooklyn at age 16 to become artists. Today, Snelling and Golding have shed their guise, and align their work with social causes such as the European refugee crisis. 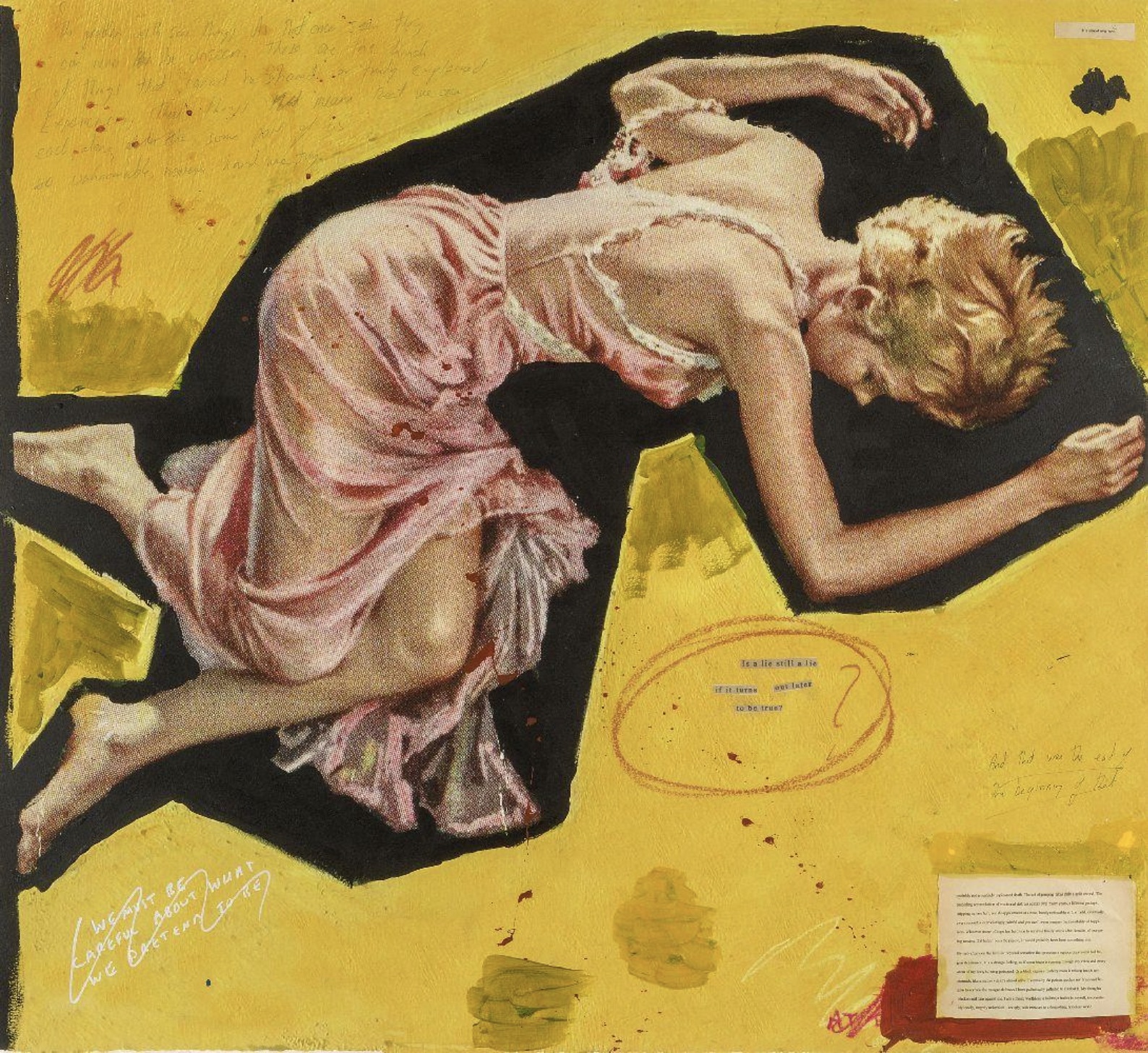 Offering to the market at £2,000- £3,000 is work by British artist Tracey Emin CBE RA. Titled Hades Hades Hades, the screenprint on cotton, stitched onto floral fabric published by Counter Editions, London in 2009 shows her love of using texture and fabric in her works. Tracey Emin is a notable and prolific artist recognized for her place in the Young British Artists movement of the 1990s, and in particular for her provocative and controversial works. As illustrated in this artwork, Emin explores very personal and turbulent childhood experiences alongside sexual history, which is often described as confessional. The repeated text Hades on this left-hand screen print evokes the underworld in Greek mythology, a word which later became synonymous in Christianity with hell. For Emin Hades has a further, more personal meaning as it was the name of a night club in Margate, and a place where she experienced some of her best and darkest teenage memories. The right-hand side of the print shows a sketchily drawn figure on her knees who appears to be holding a hammer in one hand. 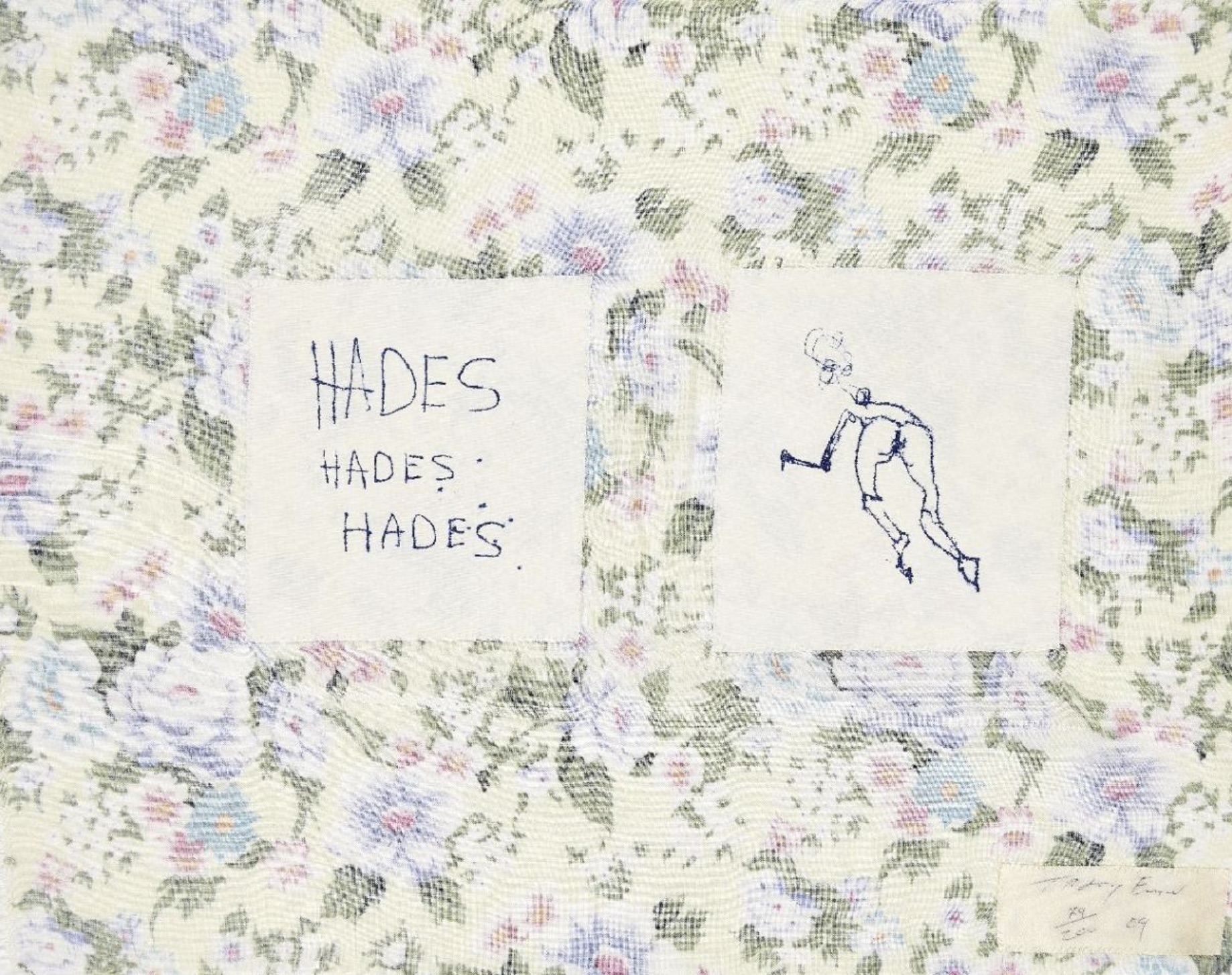 Elsewhere, a great example of a linocut on offer within the auction by Cyril Edward Power, (1872-1951). Cyril Edward Power was an English artist best known for his mastery of linocut prints, long-standing artistic partnership with artist Sybil Andrews and for co-founding the Grosvenor School of Modern Art in London in 1925. He was also a successful architect and teacher. Today Power’s work is held in collections worldwide, including the British Museum, National Gallery of Australia, and the Museum of Modern Art, New York. A similar version to the work on offer at Roseberys can be found within the V&A collection. This exquisite example of Power’s linoprint work at Roseberys comes with an estimate of £2,000- £3,000. 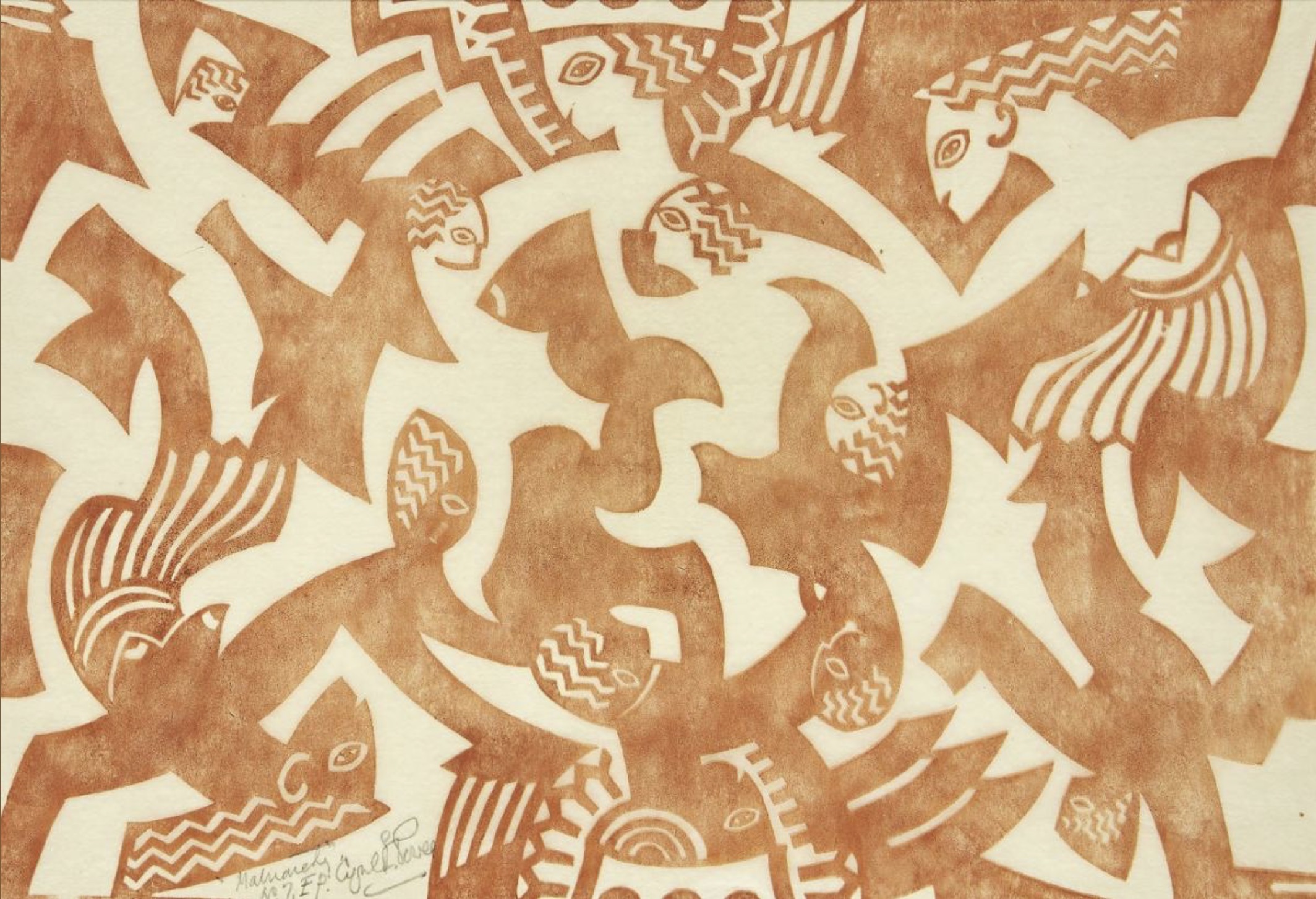 A complete portfolio of 50 screenprints and photolithographs in colours on wove by Scottish artist Sir Eduardo Paolozzi CBE RA, (1924–2005) titled General Dynamic F.U.N., 1967-70, published by Alecto Studios has been entered into the sale at £1,500- £2,000. Paolozzi was one of the pioneers of the pop art movement in the UK and was admired for his mechanistic sculptures and his kaleidoscopic print projects. Within these series of screenprints Paolozzi explored familiar household names of advertising, high fashion and Hollywood. Between Tuesday 12 November 2019 – Saturday 4 January 2020, the work was on view at the Hayward Gallery at the Southbank Centre in London. The artist’s friend and occasional collaborator, J.G. Ballard, described the General Dynamic F.U.N as a ‘unique guidebook to the electric garden of our minds.’ 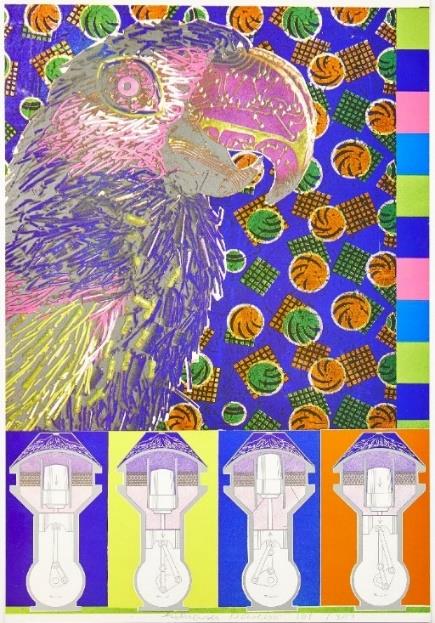 Coming with an estimate of £1,500- £2,000 is an etching with aquatint in colours on Magnani wove titled ‘Stromboli’ by British artist, Victor Pasmore CH CBE (1908-1998). Stromboli was one of a series of etchings made at the 2RC studio in Rome, for which Pasmore used a very direct method of working on the plate to produce large and fluid areas of colour aquatint. Aquatint is a printmaking technique that produces tonal effects by using acid to eat into the printing plate creating sunken areas which hold the ink. To produce this work, he poured a solvent onto the varnished copper plate, while controlling the run and spread of the liquid. The area thus bared for aquatinting and etching was then modified and augmented to complete the image. Pasmore is famous for pioneering the development of abstract art in Britain in the 1940s and 1950s. 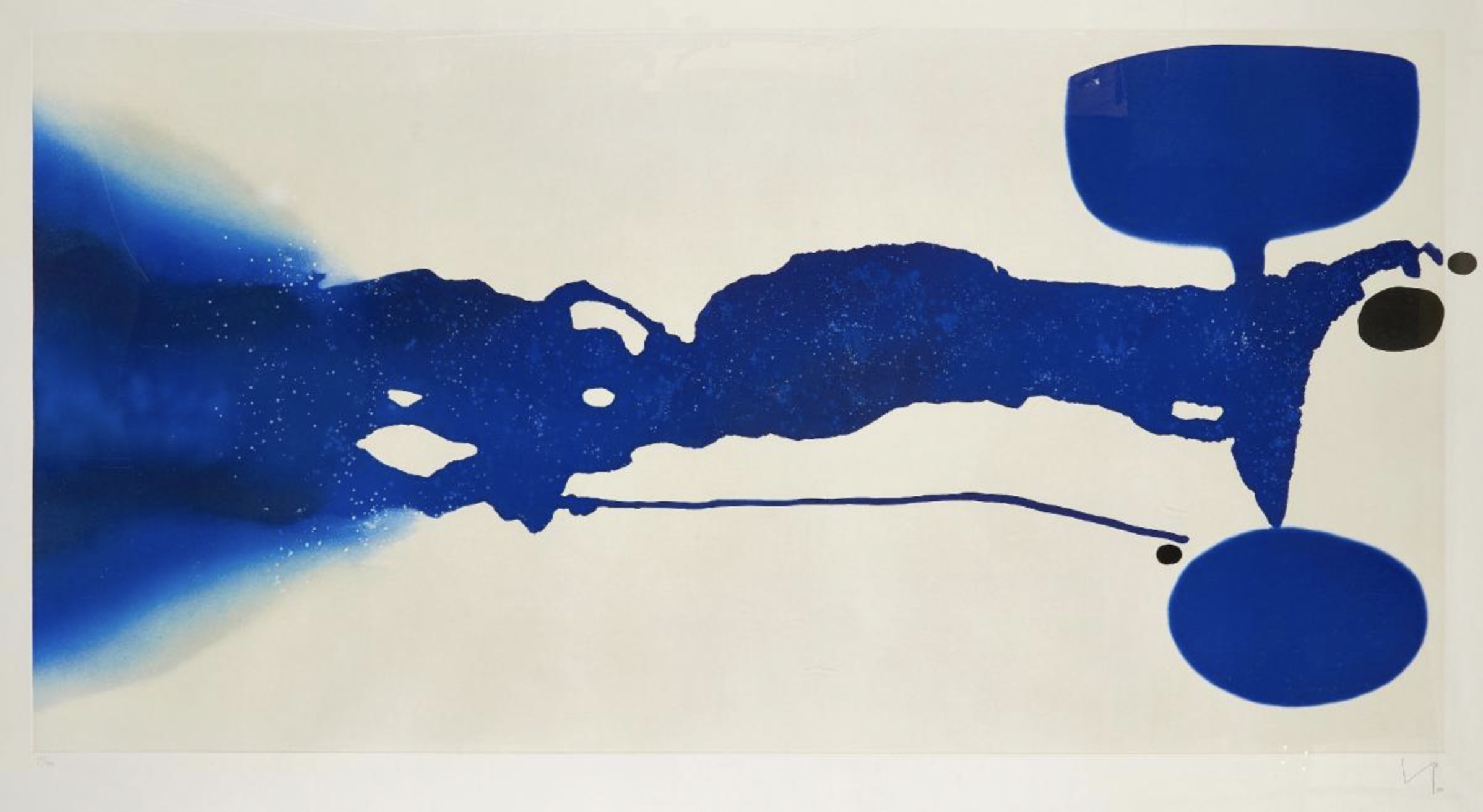 A complete suite of seven screen-prints in white on black wove, together with accompanying book is being offered at £1,000- £1,500 within the auction by Italian contemporary artist Maurizio Nannucci. Living and working in Lives and works in Florence and South Baden, Germany, Nannucci’s work portfolio includes photography, video, neon installations, sound installation, artist’s books, and editions. A large focus within his work has been exploring the relationships between art, language and image since the 1960s with the creation of “Dactilograms” – a more diverse dimension of meaning and a new perception of space. The work on offer at Roseberys is a prime example of Nanucci’s use of language as an artform. 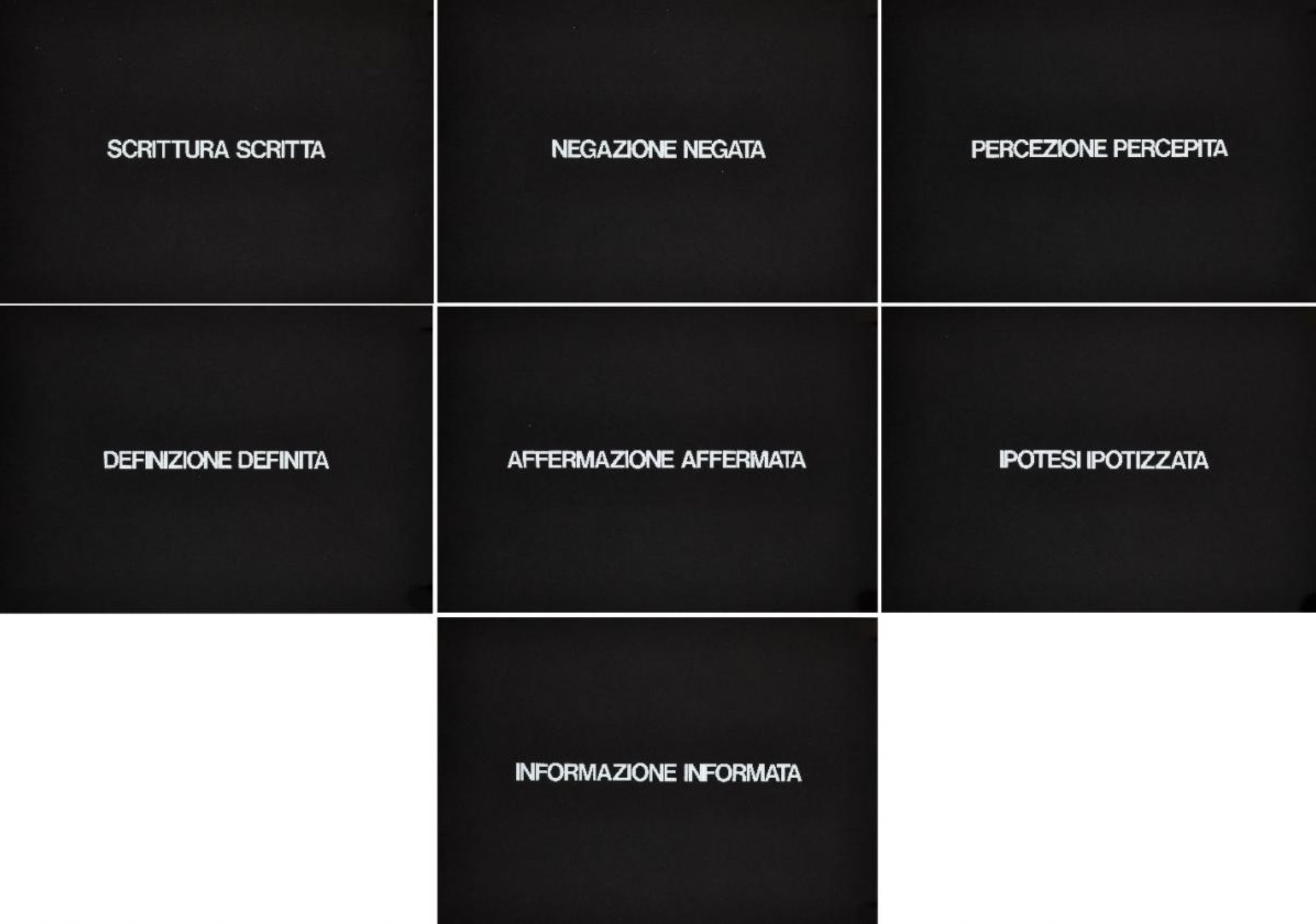 The final highlight within the auction comes from the legendary king of Pop Art, Andy Warhol. Included within the sale are three prints by the renowned American artist, with the print from The American Indian series (Red) being the highlight of the group. By the mid-1970s, Andy Warhol was veering away from his earlier focus on mainstream celebrities and toward more eclectic subjects. The image featured on this poster is a painting created by Warhol of Native American civil rights activist Russell Means, who he produced a series on in 1976. Within the artwork Warhol presents Means with exaggerated, glamorized features; that are similar to the series from the mechanical approach of Warhol’s earlier celebrity portraits. Through a combination of mass technology and ornamental technique, Warhol transforms a commonplace image, such as the lot on offer, into a dignified and majestic portrait that pays tribute to both an individual and his people. The offset lithographic poster in colours on thin wove comes with an estimate of £1,000 – £1,500. 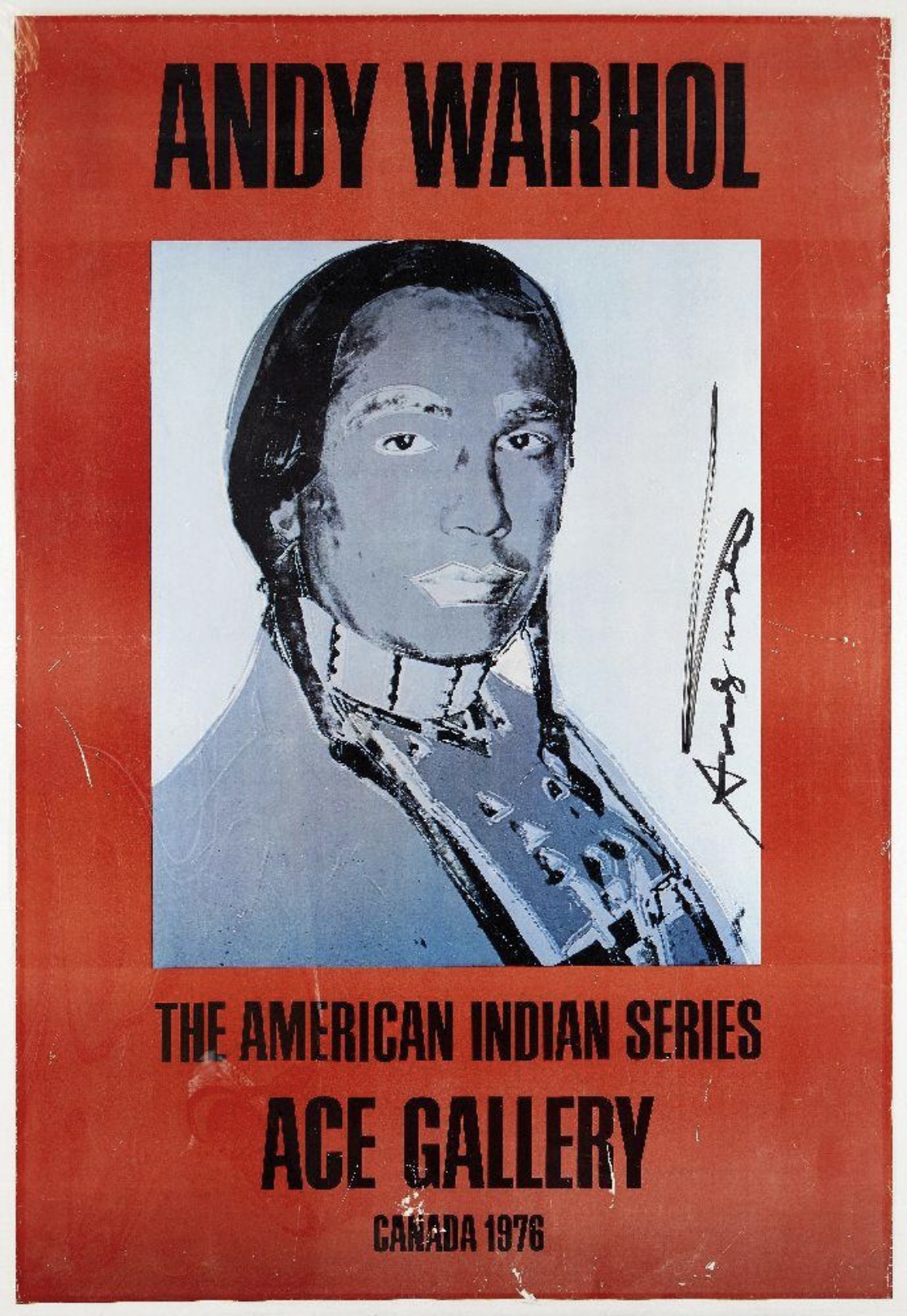