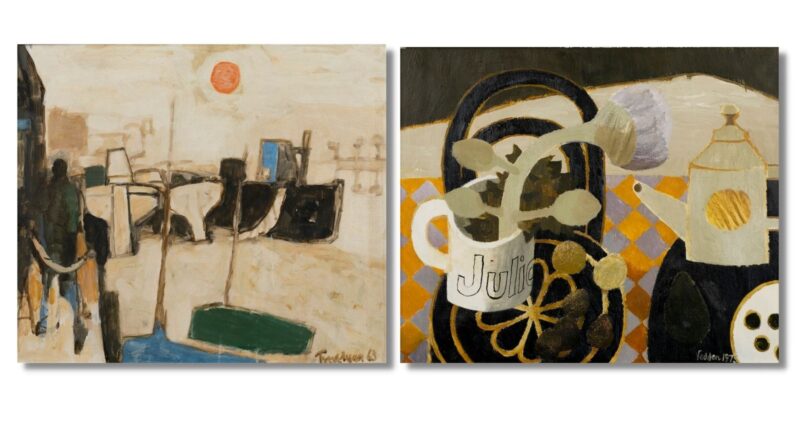 Paintings that document the powerful relationship between two of the UK’s best-loved modern artists come for sale in London next month.

Lyon & Turnbull’s specialist Philip Smith noted “It is a delight to see these works by the most beloved of British artists come together, helping to give a fresh insight and evocation to their story and lives together”.

Fedden first met Trevelyan when she was a student at the Slade in the 1930s, and (although he was husband to the potter Ursula Darwin) had declared on the spot she knew the man she would marry – something that proved correct in 1951. They remained the closest of companions for the next 40 years, pursuing their artistic endeavours from Durham Wharf in Hammersmith – a house and studio on the banks of the Thames that Trevelyan had bought in 1935.

The forthcoming works from four different private collections include early pictures by both artists. Trevelyan’s The River Thames Flooded at Chiswick (estimate £6,000-£8,000) was painted in 1945, shortly after the artist was demobbed from the Royal Engineers. He had spent much of the Second World War serving in North Africa and Palestine as a Camouflage Officer, becoming an expert in desert camouflage and deception.

The Thames was a constant source of inspiration to Trevelyan. He wrote in 1957 (Indigo Days): “Here [at Durham Wharf] … I put down my tap-root; My life was measured by its tides, and my dreams were peopled by its swans and seagulls. It has become the backcloth to all my various activities and has remained so ever since.”

His oil on board Barges at Durham Wharf, Hammersmith from 1963 with a provenance to Gallery Edward Harvane is guided at £7,000-£9,000.

Mary Fedden’s historically significant Fisherwomen (estimate £6,000-£8,000) was completed in 1947 – the year of her first ever solo exhibition showing still-life and flower paintings at the Mansard Gallery in department store Heals. After the War (when she served in the Land Army and as a driver for the NAAFI in France), she had returned to London to work as a full-time artist, receiving a commission to create cover designs for Woman magazine. She would hold one-person shows at venues throughout the UK every year until her death in 2012 by which time she had achieved ‘national treasure’ status.

Although the couple travelled widely in Europe, Africa, India, Russia and America they typically worked together in different corners of a shared studio. Fedden’s work often referenced their lives together through the use of personal objects from their home or by incorporating rejected fragments of Trevelyan’s etchings in her collages. Within this collection are two mature Fedden oils from 1975 titled Julian’s Mug (estimate £6,000-£8,000) and The Etching Table (£8,000-£12,000).

Particularly poignant is that the group ends with two gouache works by Fedden from 1988, the year of Trevelyan’s death. One titled Trevelyan with Dog depicts her husband alone with a family pet, the other with only a woman and dog on a beach. These are expected to bring £2,000-£3,000 each.