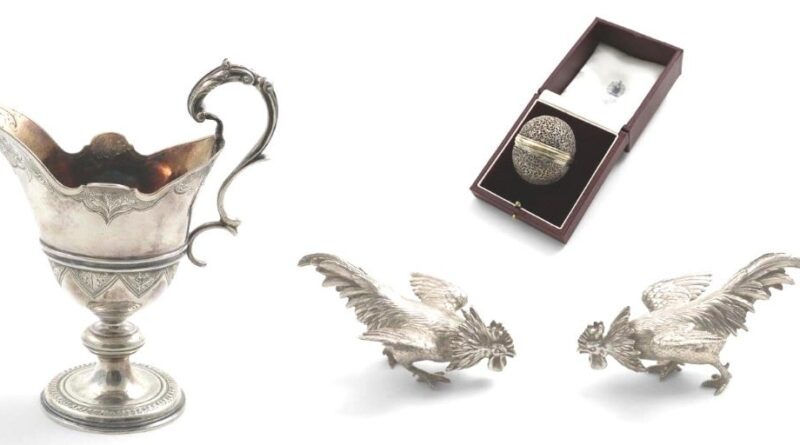 A long-delayed fine art sale featuring nearly 600 lots of silver and vertu caused a great deal of eager bidding online and by telephone, according to Somerset auction house Lawrences of Crewkerne.

The auctioneers said that good Georgian silver maintains its popularity and a rare Irish cream jug by John Hamilton of Dublin (c.1730) exceeded hopes of £400 to make £2,500; a suite of three entrée dishes from 1840 made £3,750; and good canteens of cutlery sold well – the top price was the double-estimate £10,000 paid for 475 ounces of modern German King’s Pattern flatware.

Smaller novelty pieces or items of historic curiosity have special appeal for silver collectors, as shown elsewhere in the sale. A Victorian pair of novelty pepperettes, cast as fighting cocks, made £2,500; and a rare Victorian vesta case, modelled as a frog, made £2,120.

A fine agate bowl and cover with silvergilt mounts of Renaissance design leapt above its £1,800 estimate to make £5,250. A parcelgilt hinged globular case just 2-inches long might have been mistaken for a vinaigrette but it was actually a rather more curious piece. It was made at about the time that King Charles II was on the throne (c.1670) and was designed to hold a `bezoar’ which is a hard indigestible mass found in the intestine. Unappealing as this sounds, bezoars were once believed to hold potent medicinal properties and were thought to be antidotes to any poisons or maladies. As such, they were much prized and were carried by their owners in small and elegant cases as a constant protection. This holder – its original cherished bezoar long since gone – made £3,000.