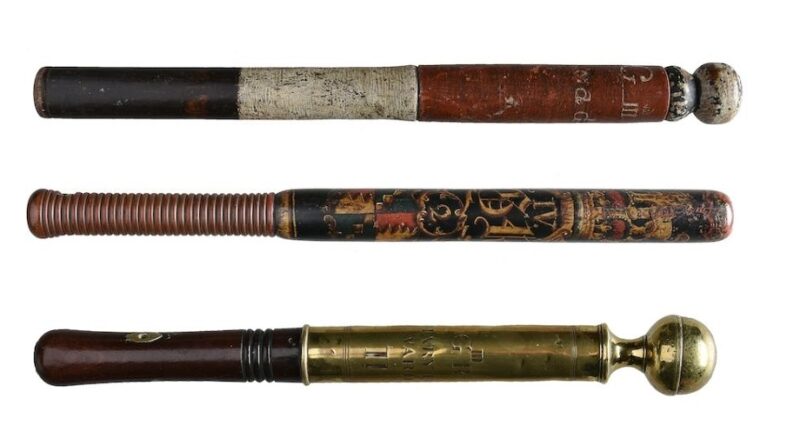 A private collection of more than 50 truncheons, rarely seen on the market, is set to go up for auction in a Berkshire saleroom.

Specialist at Dreweatts, Ashley Matthews, said: “It is very rare to have such an extensive selection of them together.”

Truncheons were used before official police forces were founded. Those before the 1880s are considered exceptionally rare and are therefore highly prized and sought-after. The majority of the highly decorated pieces were seen in the 18th century and often featured coats of arms, motifs, symbols and emblems connected to their owner and the region that the owner was from.

The seller of the collection, a private collector who has carefully curated it over many years, said: “It was the more unusual, interesting and scarcest of pieces that I sought, as well as those in the finest condition. I also wanted the broadest range of examples for the collection.”

Among the highlights is a striking red, gilt and black Victorian Parker of Holborn church warden’s truncheon, possibly for St Mary’s, Islington, stamped Parker 233 Holborn. It is estimated to fetch £350-£400.

A Victorian mallet shaped Royal Naval petty officer’s painted truncheon features a wood mallet section above a brass knop, as well as a tarred cord grip and martingale. It is impressed VR and is estimated to fetch £100-£150.

While the truncheon is almost always associated with policemen, there are some that have no link. One such example is a green painted ceremonial sceptre or mace, dating from the 19th century, believed to possibly be a Tibetan monk’s sceptre. It is estimated to fetch £350-£400.

A Victorian Manx truncheon with a carved wooden tapered form, is decorated with a crown and V.R cypher and triskelion (or triple spiral). It is estimated to fetch £300-£350.

An early Victorian painted and dated wooden truncheon in the sale bears an inscription Fredk. Boore of the Hundred of Whalesbone in Sussex. The High Constableship of the Hundred was a ceremonial honour comprising duties, such as maintaining law and order and managing parochial affairs with church wardens. The decorative truncheon also bears the Arms of the Marquess of Abergavenny and is estimated to fetch £800- £1,000.

A carved oak Canal Zoners truncheon from the third quarter of the twentieth century is carved Monscar, Faied, Geneifa, referring to the association formed for those serving in the Suez Canal Zone of Egypt and surrounding areas. It bears an estimate of £100-£150.

A William IV civic truncheon, for the Mayoral office of Bath is painted with a WIIII R cypher above a Royal crown and the Arms of the City of Bath. It has an estimate of £250-£300. A George IV/ William IV painted wooden City of London truncheon is inscribed Cornhill, above the shield of the City of London and bears the inscription WARD 42. It is estimated to fetch £400-£500.

A William IV exotic hardwood truncheon bears the Royal Coat of Arms above the W.R. IV cypher and the Coat of Arms of Oldham. It is estimated to fetch £400-£500. Another truncheon with a Royal coat of arms, is a George IV painted and turned wood truncheon, mounted with a crown above the G IV Rcypher. It features a red and gilt cartouche and is inscribed BOW STREET N.P. It is estimated to fetch £700-£800. A George IV carved wooden West Country truncheon of bannister form is painted in black with the G R 4 cypher and the Castle and Keys of Totnes, Devon with a Union Jack flag and a ball knop and handle. It has an estimate of £350-£400.

The sale takes place on May 12.