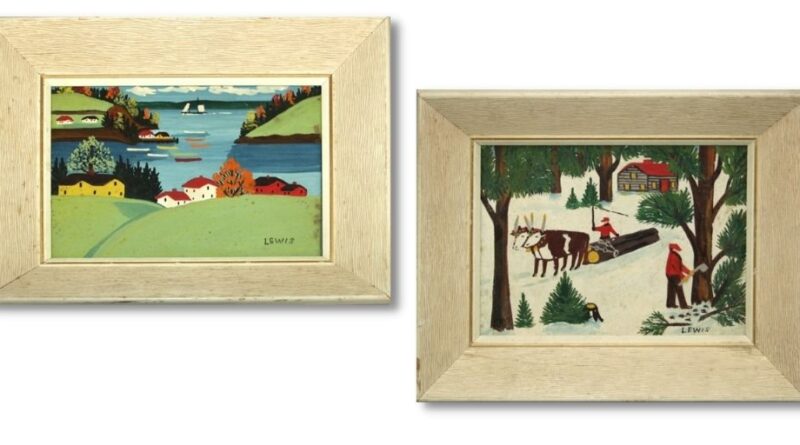 Four oil on board artworks by renowned Canadian folk artist Maud Kathleen Lewis sparked an international bidding battle in a recent Derbyshire sale, eventually selling for a combined hammer of £36,000.

The paintings, which were boxed up and had been in the same family for 70 years, went to auction with a modest estimate of £100-£200 each, with two of the paintings being repatriated to their homeland after being purchased by Canadian buyers.

Maud Lewis is revered in her home country, and her work has featured on Canada’s 2020 Christmas postage stamps. She has also inspired several books, plays and films and her work is on display in the Art Gallery of Nova Scotia.

Jasper Marsh, valuer at Hanson Holloway’s Ross in Parson’s Street, Banbury, said: “I was called to value some items at a house in Banbury. The paintings were boxed up. My client was moving house and having a sort out. She had no idea the paintings were worth anything. She inherited them from her grandfather. He was born in Canada but came to England to work in the Diplomatic Service. He eventually became a British citizen and travelled the world, adding to his art collection as he went.

“When I saw these almost childlike oils, I had a hunch that they were either worth nothing or could potentially be good things. As the family had a Canadian connection and the subject matter resembled that part of the world, I took a punt with only the signed name ‘Lewis’ to go on.

“I contacted Sotheby’s in Ontario who had previously sold her work and they kindly put me in touch with a gallery which had exhibited Maud’s paintings. I did quite a bit of spade work. The news was good and I was hopeful the paintings would do well.

“However, the intensity of the auction took me by surprise. The final bidding was largely fought out between an internet buyer and a telephone bidder. It’s nice to think that part of this collection will be returning to Canada. The overwhelming majority of interest on sale day came from Canada. My detective work paid off.

“It’s so lovely finding something like this and getting that hunch that they could be special. The paintings had been in the family for around 70 years. The vendor was chuffed to bits with the auction result and sent a really lovely email.”

The top-selling Maud Lewis painting, a late summer landscape with single boat, sold for £10,000. It was closely followed by a figure in a horse-drawn sleigh in a wintry landscape, which fetched £9,500.

Bidding was also strong for a painting of a fisherman seated on a harbour wall, which sold for £9,400, and a woodland scene featuring a lumberjack felling a tree and reindeer hauling logs, which hammered down at £7,400.

Maud Lewis (1903-1970) lived most of her life in poverty in a one-room house in Marshalltown, Nova Scotia. She was born with birth defects and developed rheumatoid arthritis, which reduced her mobility, especially in her hands. She was introduced to art by her mother, who asked her to make watercolour Christmas cards to sell.

She accompanied her husband on his daily rounds peddling fish door-to-door and selling Christmas cards for five cents each. They proved popular and she began painting. This included adorning nearly every surface in her tiny home – walls, doors, breadboxes, even the stove.

She used bright colours and subjects were often flowers or animals, including horses, birds, deer or cats. Many of her paintings show outdoor scenes, including Cape Island boats bobbing on the water or horses pulling a sleigh. She was inspired by childhood memories of the Canadian landscape and people.

Charles Hanson, owner of Hanson Holloway’s Ross, said: “The Maud Lewis paintings discovered in Banbury proved to be classic examples of her work. They capture those Canadian scenes she knew so well. It was an incredible discovery. Important finds like these continue to emerge unexpectedly and it’s always a joy to help them achieve their worth at auction.”