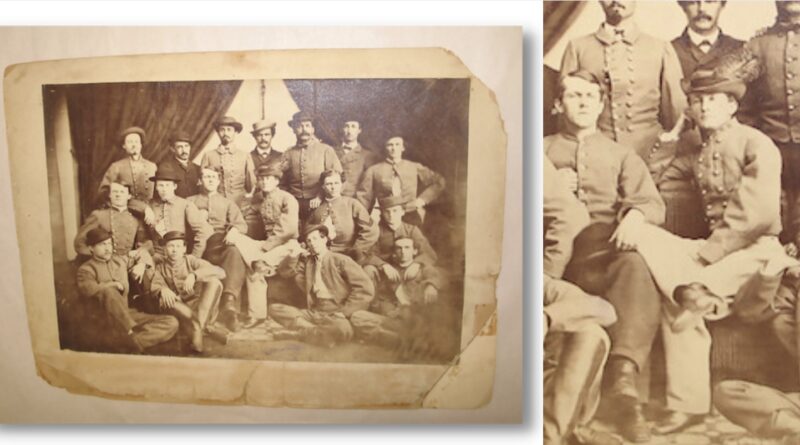 A rare photo of feared Civil War Confederate legend and his team of raiders is set to go under the hammer at John Nicholson Auctioneers, with an estimate of £300-£600.

An inscription to the reverse of the group image reveals that it was so rare that even its main subject, Colonel John S Mosby, known as the Gray Ghost because of his ability to strike Union forces without notice and then disappear quickly, did not own a copy. 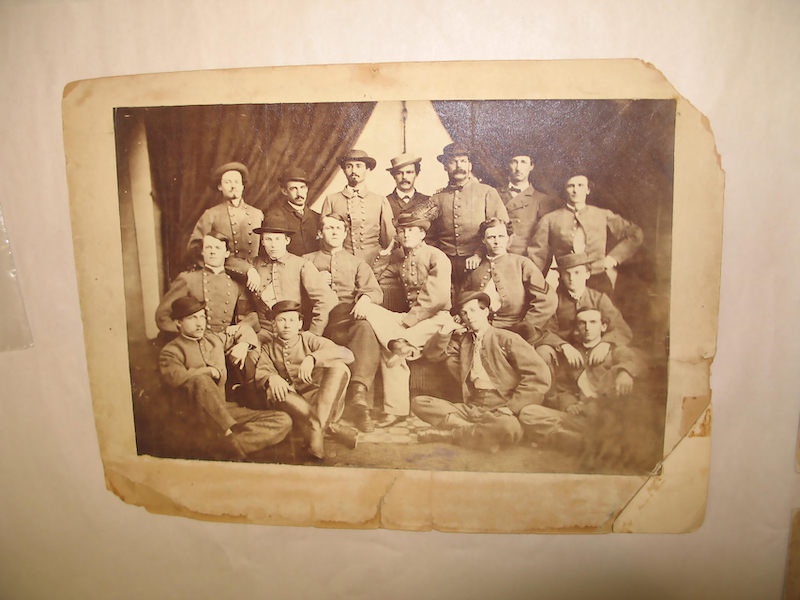 The inscription further reveals that the image, thought to date to late 1862, was the property of Colonel Ben LaBree, one of the foremost historians of the Confederacy, who wrote many books on the subject. 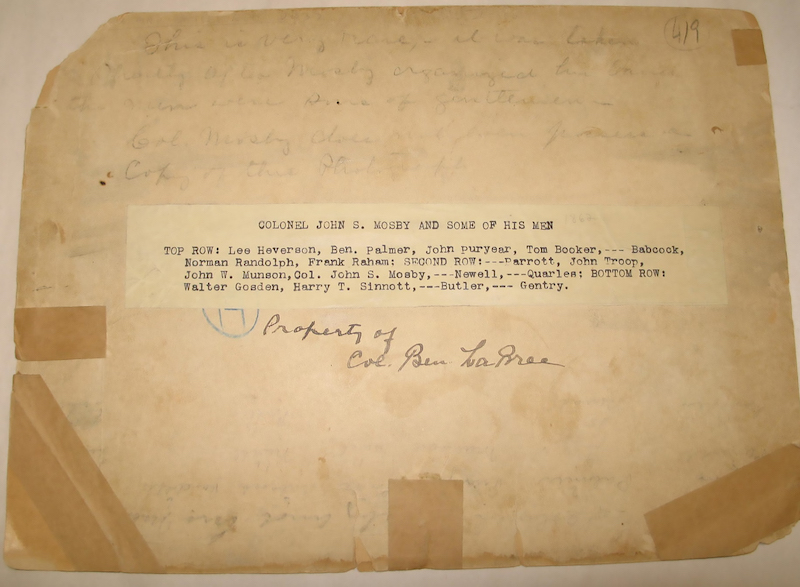 Mosby (1833-1916) was a weak and bullied schoolboy who grew up to be one of the most feared Confederate commanders, leading the 43rd Battalion of the Virginia Cavalry, known as Mosby’s Rangers or Mosby’s Raiders.

They formed at the end of 1862 following a series of raids after the Battle of Fredericksburg to disrupt federal communications and supplies from Washington.

Operating under the ultimate command of the Confederate leader General Robert E. Lee, within months Mosby was leading a regiment-sized ranger force outside of the usual military command structure. In one raid Mosby himself captured a senior Union commander, General Edwin H Stoughton, as he lay in bed. The raid also netted two captains and dozens of other Union men without a shot being fired.

Further successful raids added to Mosby’s legend, especially as he and his men were able to disappear quickly after they struck by adopting the disguise of local farmers and other folk.

The Confederacy’s fortunes turned, however, as an indirect result of a daring attack that Mosby led across the Potomac river on June 10, 1863.

Routing a company of the Sixth Michigan Cavalry, Mosby reported his success back to General J.E.B. Stuart, who then decided to use the same Potomac crossing in his advance on Union forces.

The decision meant that Stuart’s forces were separated from those of General Lee for longer than expected and did not arrive at the fateful battle of Gettysburg until the second day, leaving Lee’s forces without their cavalry in the face of the enemy.

When Lee finally surrendered in 1865, Mosby was effectively posted as an outlaw guerilla chief by Union forces. Despite opportunities to surrender and be allowed home along with his disbanded force, Mosby continued to resist with a $5,000 bounty on his head. He finally surrendered on June 17, one of the last Confederate officers to do so, but only after he had confirmed that his arrest order had been rescinded. He was just 31 years old.

If the Civil War ended in defeat for Mosby, his future career as a lawyer and public servant was a notable success, even if his new allegiances spread shock and horror among his former military colleagues.

Following the war, Mosby and his family continued to be harassed by Union forces until President Ulysses S Grant issued him with a personal handwritten exemption from arrest and a guarantee of safe conduct in January 1866.

The warm relations between the two helped Mosby secure an amnesty bill for former confederates, and by 1872 Mosby had become Grant’s campaign manager in Virginia.

The respect was mutual. Grant later wrote in his autobiography: “Since the close of the war, I have come to know Colonel Mosby personally and somewhat intimately. He is a different man entirely from what I supposed. … He is able and thoroughly honest and truthful.”

As Mosby’s star rose, he was seen as a turncoat by Union haters in the south.

Moving to Washington DC following the death of his wife in 1878, he courted leading politicians in the hope of preferment, eventually accepting the office of US Consul in Hong Kong, a post he held from 1878 to 1885. It was during this period that he exposed extensive corruption among his fellow Far Eastern consuls and officials.

He later worked as a lawyer in California for the Southern Pacific Railroad and at one point even became a mentor to the very young George S Patton, later the legendary World War Two general.

Despite a number of setbacks, Mosby’s career continued in the Justice Department under President Theodore Roosevelt, where he acted as a troubleshooter investigating corruption among officials across the US.

Finally retiring aged 76, he lived out his remaining years in Washington DC.

Mosby’s significance in the Civil War and afterwards has been commemorated in numerous honours and monuments – even a World War Two Liberty ship was named after him, and there is a John Singleton Mosby Museum in Virginia.

The writer Hermann Melville wrote a poem about Mosby’s exploits and CBS created a 39-episode TV drama series about him, The Gray Ghost, broadcast in the late 1950s.

The photograph at John Nicholson’s has come to light from the personal collection of a late militaria expert. It is inscribed in pencil as follows: “This is very rare. It was taken shortly after Mosby organised his band. The men were Arms of gentlemen – Col Mosby does not even possess a copy of this photograph.”

A type-written label identifies those shown in the line-up, including Mosby himself, seated casually cross-legged at the centre.

Another pencil inscription gives the date of the photograph as 1862, while inscribed in ink is “Property of Col. Ben LaBree”.

Offered with it at John Nicholson’s Antiquarian Books & Documents Auction on August 10 is a selection of portrait photographs of other notable Confederate leaders. 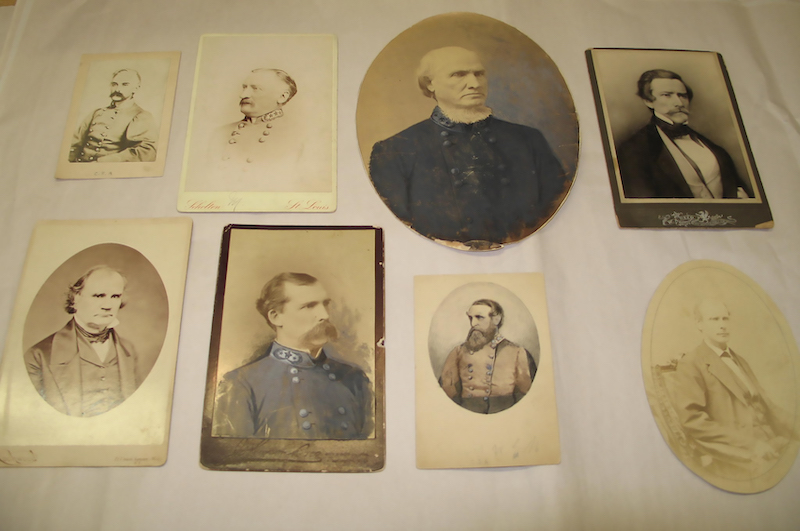