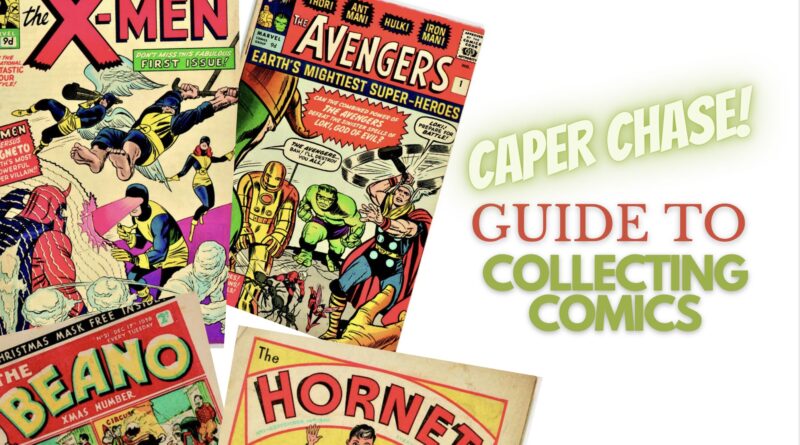 When it comes to collecting the comic book world of superheroes, fantastical beasts and intergalactic villains, theAmerican titles beat their British cousins into the kind of pulped and bloody mess usually meted out by the hammer-heavy fists of the Incredible Hulk.

Perhaps fittingly, the current world record price fora comic book belongs to a June 1938 copy of ActionComics #1, which saw the first-ever appearance of Superman, helping the comic to soar (like a bird) to an impressive $3.25m in a private sale earlier this year via ComicConnect.com.

The comic reveals how, arguably, the world’s most iconic super hero first came to Earth, adopting the moniker of Clark Kent. The world-record price narrowly beat the earlier record set by another copy of the same title, which fetched just over $3.2m in 2014. While the condition of the comic was one factor in its sale success, the fact that only around 100 of the issues exist certainly added to its super powers.

It’s a highly impressive set of figures, particularly when considering the relative immaturity of a market that’s not yet 100 years old.

The Glasgow Looking Glass, first published in 1826, is generally regarded as one of the first comics in a format that we would recognise today, utilising such elements as speech bubbles, caricature, captioned pictures and lines of narrative.

By 1845, following the adoption of sketches and satirical drawings in a growing number of newspapers and magazines, the word ‘cartoons’ was coined to describe the artform. In 1841, the celebrated and influential British magazine of humour and satire, Punch, began publication, featuring the work of such luminaries as WM Thackeray, PG Wodehouse and Sir John Betjeman who regularly held up politicians of the day to cuttingly humorous scrutiny.

However, it was the 1920s and 1930s when the comic book really came into its own as a form of mass media, with the US leading the way. With a far younger audience the key demographic, each week children in the USA and UK were soon eagerly reading about the high-octane adventures of their super hero favourites or a host of hilarious capers of larger-than-life characters.

Fast-forward to today and it’s these early titles that pack a punch with potential collectors and investors alike, continuing to build on nascent interest stimulated by the growth in specialist comic stores in the 1970s which catered for a burgeoning collectors’ market.

Yet, ironically, the current levels of interest are being driven by a host of modern platforms that are far removed from comic’s traditional environment of ink, paper and printing presses.

Newcastle auctioneers Anderson & Garland has been selling comics for longer than any other art auction house in the country, starting some 35 years ago. Auctioneer and Valuer, John Bullock-Anderson has witnessed the change throughout his career. “Just when I thought comics were going to die, Iron Man became a huge success in the movies. Because of the influence of Netflix and Disney, streaming and movies, there is now a younger generation who are avidly consuming comics material.” He continued: “What that means is there’s now a new demand for historic comics because they lead into the new media that everyone’s so avidly consuming today.”

However, there appears a clear divide between the collecting of comics in the UK and the US. John said: “The British refer to ‘comics’ as opposed to ‘comic books’, which is how the Americans refer to them.

The prices that have been achieved by some rare comics at sales in the US seem unlikely to be mirrored in the UK anytime soon. “They never will. There’s a number of reasons for that,” said Malcolm Phillips, director of Comic Book Postal Auctions in London.

“The first is that comics collected in the States have super heroes from which there have been a multiple of successful movies over the last 20 years. People go and collect the comics having seen the movies, and that makes the comics more valuable generationally.”

The collecting market, however, generally constitutes an older demographic. “Most of the guys who spend serious money tend to be north of 50 or 60 years old who can remember them the first time around,” said John Bullock-Anderson. Moreover, unlike some areas of collecting, it’s also a community that crosses gender divides. “Comic collecting is one of the few specialist areas that I deal with where there are a lot of women, unlike toys and model railways.”

“The so-called ‘golden age’ of comics starts around the time of the first Superman and is principally DC Comics, alongside a couple of other publishers who have since gone out of business. The ‘golden age’ has fantastically valuable comics, but they are so rare that no one hardly ever comes across them,” said John.

“All of the real action is in the ‘silver age’ where there is a wealth of comics that have survived from that period. These tend to be the ones that speculators are speculating in.”

The greater numbers of US comics that have survived and now fuel the market is in no small part due to the production techniques employed by the country’s comic publishers.

“America also invented the comic book, and the bottom line is the demographic of population – there are 10 times more people there than in the UK,” said Malcolm.

The US term ‘comic book’ is also an apt description when it comes to the media. John said: “It’s quite right to refer to American comics as ‘comic books’ because they were produced with greater artistic standards and the printers’ art. You get glossy covers, in a sort of book format, and they’re designed to be read like mini graphic novels.”

As with other areas of collecting, rarity and condition are both crucial factors in prescribing value to an individual comic. In order to define the relative condition of comics, the collecting community took an early lead from the grading system used by coin collectors. John said: “They used all the terms that coin collectors use, such as good, very good, fine, fair and so on.”

There is now an industry comprised of grading companies who will independently assess each comic’s condition and ascribe it a community-recognised grade. “They are graded in marks out of 10. For example, a very tatty comic might be 0.3, so you use the points in between. The difference between an important comic that is graded at 9.6 and one that’s graded at 9.2 might be more than 50 percent.”

Moreover, preventing future damage to comics and rendering a grade void has given rise to the phenomenon of ‘slabbing’. John explained: “The grading company seals the comic inside a vacuumsealed plastic casing, so it’s ‘slabbed’ within a clear casing, which cannot be opened unless you want to invalidate the grading.” This, in turn, has created a speculative market where collectors and speculators trade in slabbed comics, much like share certificates.

As with the stock market, the value of comics can rise and fall due to various reasons, with one predominant. “Now the market is driven by what’s called ‘key comics’,” said John. “In the old days, if you liked Batman or Superman, you tried to get every comic. Modern collectors don’t collect like that. They’re looking for key issues, which feature the first appearance of any famous comic character.”

He continued: “A really great example is The Incredible Hulk #181, which has the first full appearance of the character Wolverine from the X-Men. The X-Men comic is the most popular in the world. If you have a copy, in even moderate condition, it’s worth £1,000. If you have in really super condition it can be worth £20,000.”

Similarly, rumours about movie productions within the all-pervasive Marvel Cinematic Universe will have a bearing on the value of historic comics. “For example, as soon as the rumour gets around that Spiderman will be fighting the Sandman, an obscure super-villain, collectors will ask which comic he first appears in, which can then triple overnight.”

Although rare copies of Beano #1 from 1938 have sold for thousands in recent years, prices in the UK generally don’t replicate those seen in the US.

“Compared to America, there are just a handful of collectors for British comics, but they are absolutely fanatical. One reason is that it’s so much harder to find what they’re looking for. Almost no one is interested until you get before 1960, or particularly pre-war,” John said.

One of the reasons is scarcity. Unlike in the US, British comics were treated more like newspapers; cheaply produced pieces of ephemera. It generally means that British collectors are more sanguine about condition. However, collectors will still pay hundreds if not thousands for rare and sought-after examples or titles. “We had a nice collection of Beanos earlier this year, and we were selling job lots of 1950s and early 1960s Beanos for over a £1,000, which is big money in British comics. Those that have survived are absolutely venerated by the disciples at the shrine,” said John.

Well worth starting a collection, then, or raiding the attic to see what’s inside those dusty boxes.

Is Beano or The Dandy more collectable?

Beano, mainly because of the characters. It had Biffo the Bear, Lord Snooty and his Pals, which were perceived to be a bit more interesting than The Dandy’s Korky the Cat and Keyhole Kate. Beano was always the more dominant comic. That’s borne out over the years by prices for Beano compared to The Dandy, which in general are 20-25 per cent more across the board.

What other factors determine value?

Are the comics increasing in value?

What are the challenges?

The complete years are really difficult to find, so when you have one all together and sometimes in a bound volume, then there is a strong premium for having all issues for that year.

What are the ‘holy grail’ issues?

Beano for 1951 #452, that’s the issue that has the first appearance of Dennis the Menace. The comics either side of it would be £3-£4 each, but that particular copy is in the low hundreds. More collectors go for special issues of the comics: The Christmas issue, the fireworks issue, the Easter issue and April Fool issue.

How should comics be stored?

Paper always disintegrates over time because it’s a natural fibre, especially from the 1950s and before because there were no additives to keep pages bright and fresh. Put a comic into a plastic bag, leave the top open and don’t seal it, so there’s a little bit of air. The two most important things are store away from the light and away from drastic moisture changes, so a generally dry environment.

Aren’t UK comics generally rarer than the US?

Beano: The Art of Breaking the Rules

London’s Somerset House’s exhibition Beano: The Art of Breaking the Rules celebrates the world’s longest-running weekly comic and the 70th anniversary of its most infamous character –Dennis The Menace.

Since its first release in 1938, Beano boasts more than 4,000 editions to date from its home in Dundee. The landmark exhibition explores both the comic’s, and contemporary art’s, irreverence via comic drawings, archive artefacts and recreations of well-known settings from Beanotown, such as Bash Street School.

Curator artist Andy Holden said: “To present an immersive display of Beano’s history and influence on art and culture is the curatorial equivalent of a ‘Beano feast’.”

The exhibition also explores how the comic tackles class, education and feminism. Beano: The Art of Breaking the Rules is open now, find out more at www.somersethouse.org.uk/beano