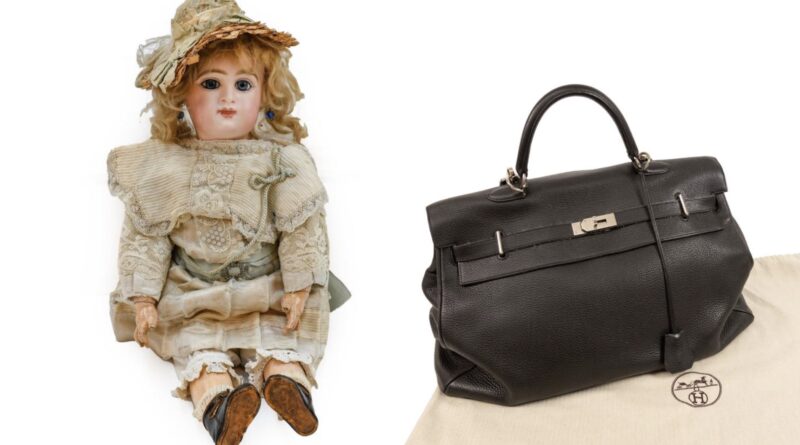 A rare French 19th-Century doll made by Daniel & Cie is one of the highlights of an upcoming sale in North Yorkshire.

Tennants Auctioneers’ Costume, Accessories and Textiles Sale takes place on November 20. The Paris bebe bisque head doll is estimated at £2,500-3,500 and is an important piece of doll history.

In 1890, leading doll makers Jumeau successfully sued Daniel & Cie for copyright infringement, and all the moulds for Daniel’s dolls were destroyed. Thus, extant examples, such as the present doll, are rarely found on the market.

With a Royal connection come two lots of costume and shoes that once formed part of the 1997 Duke and Duchess of Windsor Sale at Sotheby’s, which saw the sale of over 3,000 lots from the personal collections of the Royal couple. A copy of the catalogue is also included in the sale.

An interesting selection of costume in the sale includes two Victorian wool dress, found in the bottom of a trunk purchased by the vendor at another auction, estimated at £150-250, a good selection of costume from the 1920s to 1950s, a large collection of clothing designed by Jean Muir, and a 1970s outfit from legendary Chelsea boutique Mr Freedom that was frequented by the likes of Elton John, estimated at £100-200. Also on offer is a pair of circa 1980s pale blue wool breeches by Vivienne Westwood, estimated at £100-200, and a selection of Japanese-style robes that were once theatrical costumes in a local Country House.

A rare early 18th-century white trapunto quilted bedspread, which bears a handwritten label that reads ‘Quilt about 200 years old, sent by Miss **pince, Leyburn’ is on offer with an estimate of £300-500, and a selection of wool-winders, haberdashery, hats, milliner’s tools and feathered accessories is lead by an Allie Maillard hat conformer, a head-measuring tool made in Paris circa 1900, estimated at £800-1,200. Elsewhere, a late 19th-century wool work picture depicting the British Raj in India is estimated at £300-500.

Finally, a selection of designer and luxury costume and accessories, including fine gentlemen’s suiting, is also on offer. Highlights include Hermès black leather Kelly 50 travel bag carries an estimate of £2,500-3,500, and a selection of Hermès silk scarves.