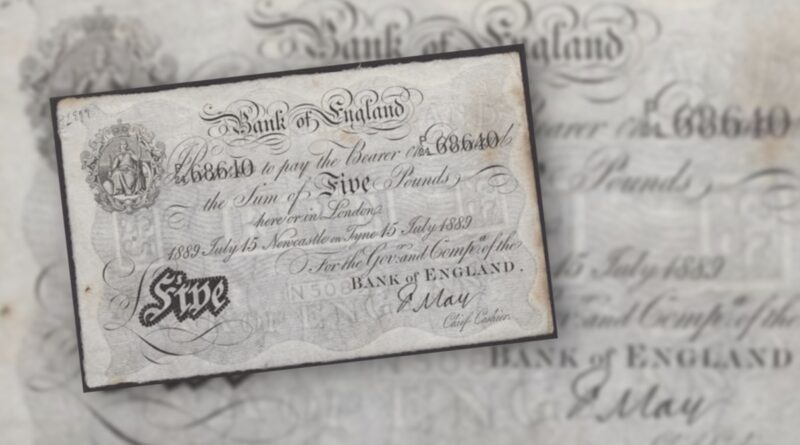 A Bank of England £5 note issued in Newcastle on Tyne – one of only two known examples in private hands – will be offered by Dix Noonan Webb in their auction of British, Irish and World Banknotes on Thursday, November 25, 2021 at their Mayfair saleroom (16 Bolton Street, London W1J 8BQ). Dated 15 July 1889, this rare and fine note is estimated to fetch £8,000-12,000. 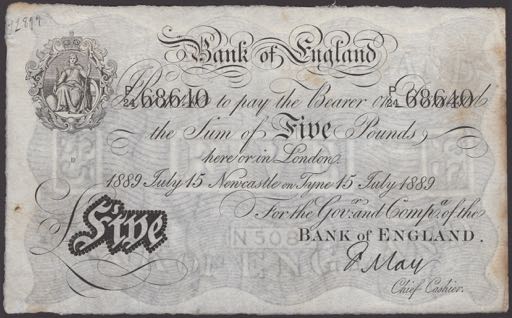 As Andrew Pattison, Head of Banknote Department at Dix Noonan Webb, explained: “The Newcastle Branch of the Bank of England issued comparatively few notes in the 19th century, meaning survivors like this are extremely rare. To find one is such remarkable condition is nothing short of astounding. The £500 note, issued in Liverpool in the 1930s, is not as rare, but is certainly a crowd-pleaser. It is in fact still worth its face value today, if you were crazy enough to exchange it at the Bank of England. The Treasury Bill, while cancelled, is a remarkable object. Nicknamed ‘Titans’, these vast denominations were used to make transfers within governments and between banks, and very few examples have ever made it onto the open market like this.”

Also included will be the first part of the enormous collection put together by the late Gus Mac Amhlaigh of Dublin. The vast majority of the collection is Irish, and will be auctioned in several parts over the next year, however there are also groups from Scotland and the Isle of Man. Among the highlights of the Irish material is a very fine and very rare £20 Lady Lavery note from the Central Bank of Ireland with a War Code from 1943, which carries an estimate of £4,000-5,000, while two very fine and rare colour specimen £20 notes for the Bank of Ireland’s iconic ploughman series – one in orange and one in red – are each estimated at £2,600-3,200. These notes were never issued and are stamped Specimen.

Elsewhere, in the Scottish section, the highlight is a fine and very rare Douglas Heron & Company (of Air sic) £1 with the incredible early date of 1772. The condition is fantastic considering it is almost exactly 250 years old and it is estimated at £1,400-1,800.

International notes include an incredibly rare Libya specimen 1000 Lire Military Authority example from Tripolitania dating from 1943 in superb condition. Estimated to fetch £7,500-10,000, this is the first time a specimen of this note has come for auction for almost a decade.