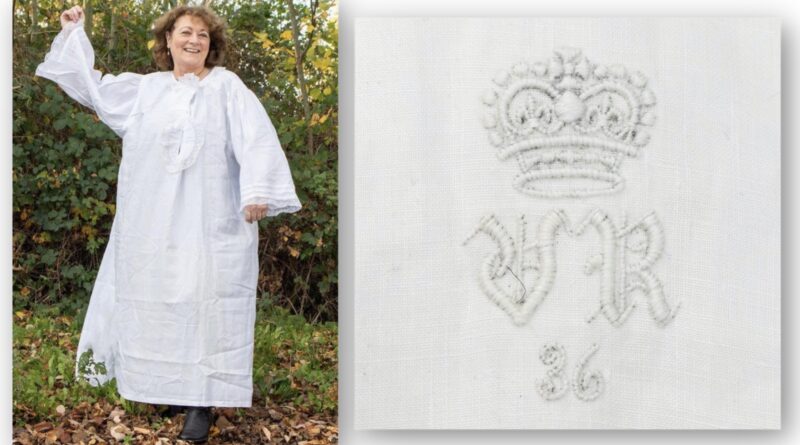 A voluminous nightdress and chemise belonging to Queen Victoria are expected to sell for thousands of pounds at auction.

The 141-year-old night garments, which have been authenticated by London’s Victoria and Albert Museum, were given to a maid who served the royal family in the 1800s.

The seller Hilary Aston, 79, a retired former language school owner from Oxford, said: “This nightdress was given to me by my uncle and aunt before they died. My uncle was Hubert Noel Charles [1893–1982] who designed the first MG motorcar. The nightdress belonged to his parents, his father being a well-known London solicitor, Thomas Charles.

“The Charles family employed several staff, one being a maid who had previously worked for the Royal Household of Queen Victoria. When she left her employment, she was given the nightwear as a gift. Apparently, staff who either retired or left were given a gift of something belonging to the Queen.

“In 2009, the Victoria and Albert Museum in London authenticated both items as Queen Victoria’s garments. They told me that the chemise in particular was very rare.”

Now the royal attire is heading to auction. Queen Victoria’s nightie is expected to sell for between £4,000-£6,000 and her chemise for £3,000-£5,000 in Hansons Auctioneers’ December 7 Fine Art Auction in Derbyshire.

Charles Hanson, owner of Hansons, said: “We understand the royal nightgown and chemise date to around 1880. As our vendor says, it was customary to give departing staff items belonging to the Queen. It’s noted in Queen Victoria’s journal that there was a method regarding the distribution of her discarded clothes.  Such a process would have been carried out discreetly through personal staff.

“The nightdress carries the Queen’s cypher embroidered in white and, stitched onto the garment, is a numbering system. The chemise has an emblem relating to Queen Victoria under the arm. Items like this would have been worn in rotation.  The nightie is voluminous in size and features lace around the shoulders and neck.

“Though Queen Victoria was only 4ft 11ins and petite when she became queen at 18, her waist expanded to 50 inches over the decades – a fact underlined by the ample size of these floaty garments.”

Hansons has a strong track record when it comes to selling Queen Victoria’s clothing. In 2008, the firm sold a pair of her royal bloomers for £4,500, a chemise for £3,800 and a nightdress for £5,200. They sparked an international buying battle with bids coming in from Brazil, Russia, Hong Kong and New York, such is the fascination with the British monarch who reigned for 63 years.

Then, in 2012, Queen Victoria’s black mourning outfit from 1890, owned by a former royal lady-in-waiting, was contested to £4,400. And, shortly before lockdown in February 2020, a collection of Queen Victoria’s clothing and boots sold for a total hammer price of £16,500.

“The 2020 sale had a particularly happy ending because a large part of the collection was saved for the nation,” said Charles. “Two pairs of leather boots, a black taffeta skirt and two bodices were secured for a total of £14,000 by Historic Royal Palaces, an independent charity which looks after London’s Kensington Palace, Victoria’s place of birth. Those particular items were found in a Norfolk wardrobe. The seller’s great-great grandfather, Alexander Lamont Henderson, worked as a royal photographer for Queen Victoria.”