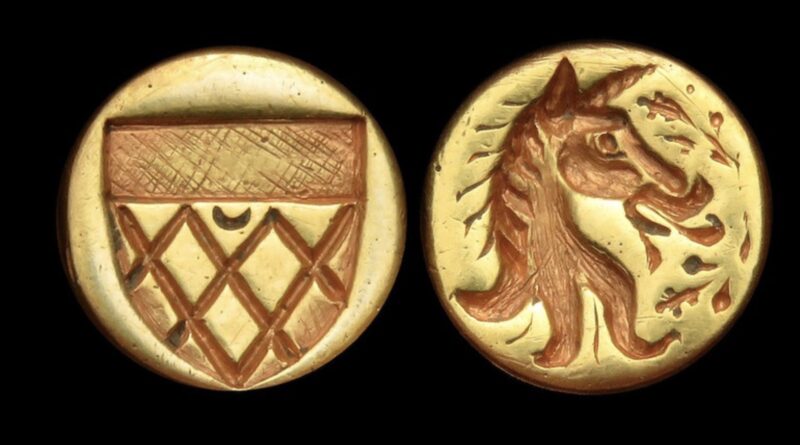 Gold buried treasure – lost for almost 400 years – smashed its estimate at auction after being unearthed by a metal detectorist.

The impressive 17th-century gold signet ring was discovered on farmland at Thornton, Buckinghamshire, in 2018. Engravings on the ring, which was more than 20 grams in weight, indicated that it belonged to a member of a noble family.

Due to its historical significance and pedigree, it was recently offered by Hansons Auctioneers in Derbyshire with a guide price of £10,000-£12,000. However, intense bidding saw the ring smash all expectations. The hammer finally fell at £20,000, double its estimate. The item was purchased by a UK bidder.

Charles Hanson, owner of Hansons Auctioneers, said: “It was an exceptional result for an exceptional find. Buried treasure lies beneath our feet, lost centuries ago. The ring’s historical importance made it irresistible to bidders.”

Experts at the auction house said the ring had been expertly crafted so that the bezel swivelled to reveal an engraved unicorn’s head – the crest of the Curwen family of Workington, Cumbria.  The other side showed the family coat of arms charged with a crescent. This indicated that the ring belonged to Thomas Curwen, second son of Sir Henry Curwen MP (1581-1623).

Thomas Curwen was born in 1602 and inherited the family estate following the death of his elder brother, Sir Patricius Curwen, 1st Baronet, in 1664. The estate included the 15th century Workington Hall, where Mary, Queen of Scots sought refuge in 1568 in the immediate aftermath of her defeat to Elizabeth I at the Battle of Langside.

The unicorn head crest is an echo of early Curwen family links to Galloway, Scotland. Gateposts at Workington Hall are surmounted by carved stone unicorns’ heads. Thomas, who never married, died on February 24, 1672 and was buried at Workington.

Charles said: “The ring had travelled far from its ancestral home but we will never know how and why. It was discovered in 2018 by a metal detectorist on farmland at Thornton in Buckinghamshire.

“Finds like this are fascinating.  Not only is it a stunning item of jewellery, it’s an important family heirloom and a fascinating piece of Cumbria’s local history.”

Proceeds From the sale of the ring, which has been examined by experts at the British Museum and reported as ‘Treasure’, will be shared with the owner of the land where the ring was found.