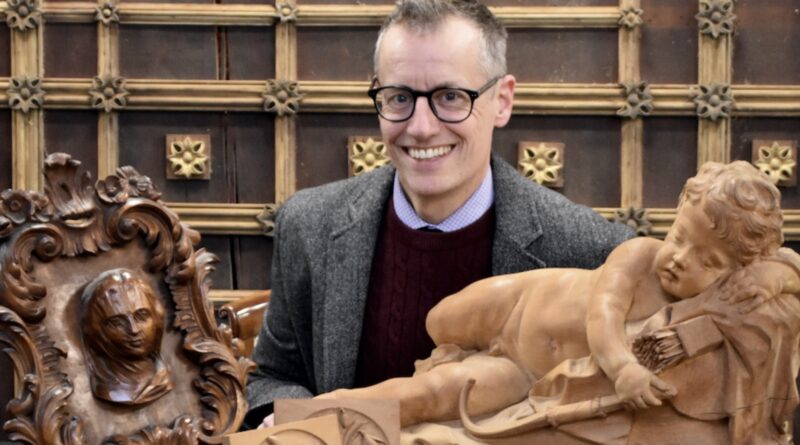 The work of wood carver Thomas Henry Kendall (1837-1919) was much celebrated in his lifetime and remains highly regarded by collectors and connoisseurs today.

A unique collection of works acquired when his studio and showrooms in Chapel Street, Warwick, were demolished in 1957 is now being sold at auction at Halls Fine Art in Shrewsbury. The collection has been tucked away in mid-Wales and unseen in public for over thirty years. The auctioneers hope that the collection could realise over £50,000.

Kendall is known for working on the Charlecote sideboard at Charlecote Hall in Stratford, as well as designing and carving thirty-two oak panels for the House of Commons dining room in Westminster.

In 1885, he designed the Mayoral chain of Warwick which is still in use today. His work was admired by royalty as well as many wealthy clients and remains in place at several churches and chapels in England and Wales.

In 1983, part of the collection was exhibited by Sotheby’s with many being sold by the firm the following year. But the private owners retained some key pieces including architectural features rescued from the wrecking ball in 1957. These include an ornately coffered ceiling in Californian red pine, part of a staircase and several carved oak door panels.

There are also sculptures including a very large Eastern maiden, a sleeping Cupid and a beautiful cartouche containing a veiled woman. The collection was assembled by the parents of Halls present vendor between 1957 and the early 1980s and has been hidden away in rural mid-Wales for several decades.

Kendall’s work was never signed and so examples have been hard to find and even harder to attribute. Also included is a very rare 1611 Bible, inside which Thomas famously replaced the last two missing pages, meticulously written by hand to match the original printed text. This piece alone is estimated at £10,000-15,000.

Halls auctioneer Alexander Clement is cataloguing the collection, and said: “I’m very excited to have this opportunity to handle these great works with amazing provenance. Kendall was an extraordinary talent and it’s high time his skills were celebrated. These are the very last pieces from his showrooms and so this represents a unique chance for collectors to buy a piece of, I believe, national importance. Perhaps one or two might find their way back to Warwick itself.”