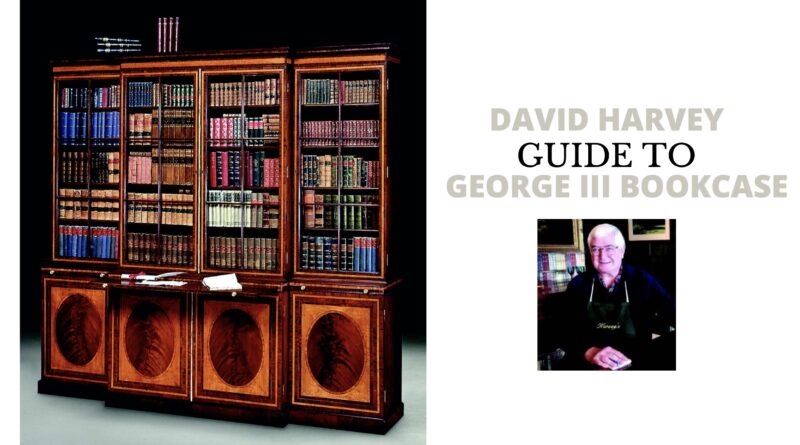 One of the joys of being an antiques dealer is the voyage of discovery that every new acquisition takes one on. When I first saw this George III breakfront bookcase it struck me as familiar. It’s no surprise, as I owned the pair to it some 25 years ago, and I have since found out that there is another identical example in Australia. This begs the question whether they were originally all made for the same library as a suite of formidable bookcases?

They certainly have a number of details making them very special.

The initial impression shows a rich, choice, flame-figured mahogany which is used in the oval door panels. This is surrounded by satinwood, with bandings of tulipwood and kingwood, more mahogany and stringing of ebony and boxwood.

The mitre in the corners of the door panels is perfect, passing through 13 different pieces of veneer. And the same treatment is apparent throughout the piece. The glass doors are brilliantly executed and show the same craftsmanship as elsewhere. Here we again see the juxtaposition of highly-figured mahogany and satinwood, as well as stringing.

There is no area where the workmanship or expense has been spared. Pieces of this magnificence were made to be seen – not hidden away in niches. They would have stood proud on a library wall which is why the inlays and bandings on the fronts of this are continued on the sides to make them complete.

Another feature common to all three examples of this bookcase I have seen, is the pull-out book slides at the waist. The bookcase would have housed dozens of dusty, ancient tomes harbouring tiny fragments of grit – the act of taking and replacing the books would have scratched the polished surfaces beneath the glazed doors. Pull-out slides solved the problem by supplying a sturdy surface on which to rest books when in use. There are three slides in all, the central one is double width to match the configuration of all the doors.

The client for whom these bookcases were made must have been extremely demanding, wanting the best furniture possible. Glass at room temperature is not as solid as it looks, which is why panes of glass can be thicker at the bottom than the top as the glass sags downwards. To ensure there was no movement in the glazed doors, this cabinetmaker used glazing bars into which the panes were secured with putty run well into the door frames.

In this instance, however, the doors were made even more secure by a wedge driven into the frame ends of the glazing bars preventing any movement – quite a feat of woodworking.

There is something very “Gillows” about this piece, seen in the choice of timbers, the oval panels and the quality of materials, as well as the superb craftsmanship. The bookcase is similar to other pieces known to be by the illustrious Lancaster makers whose work is well detailed in Susan Stuart’s two-volume book Gillows of Lancaster and London 1730-1840, published by the Antique Collectors’ Club.

I have not discovered a Gillows’ stamp, signature or receipt for the bookcase but, wherever it was made, it would have been transported to the client’s home to be assembled in situ.

The bookcase comes in 11 pieces, each of which would have had a case made for it to ensure it arrived in good condition. If, as I suspect, this was one of a suite of three – if not more – then this would have been some undertaking.

It might be the last thing you look at when examining a bookcase but the inside of the carcass can tell us a lot about the piece.

Here you clearly see the grooves into which the adjustable shelves run. The front part is executed in mahogany and, as you might be able to see, each one has a neatly finished moulded front edge.

Note how the grooves don’t extend all the way down. Examples where they extend to the bottom of the door indicate the piece has been altered from a larger carcass and the same holds true for the top height of the shelves.