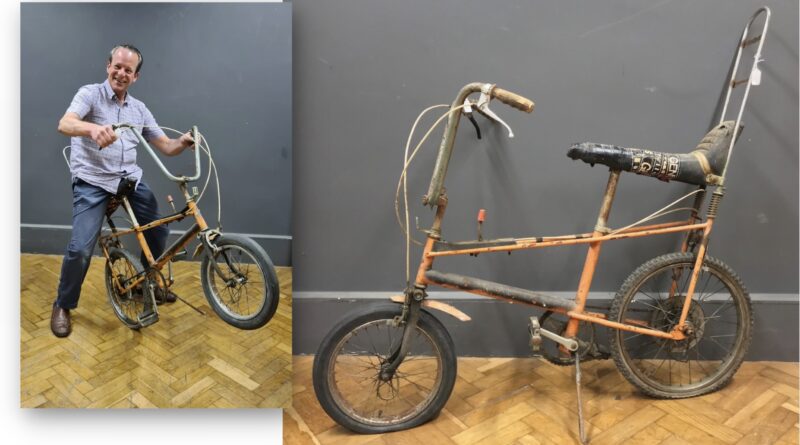 A battered and bruised Raleigh Chopper bike – that nearly ended up in a skip – stunned at auction despite its tatty condition.

The bike was discovered in a garden shed in Stratford, Warwickshire, by the man who rode it as a child – and swept him straight back to the summers of his childhood. Nevertheless, such was its condition, he almost dumped it in a skip.

But he’s glad he didn’t because the iconic 1970s/80s bicycle sold at auction at Hanson Holloway’s Ross in Banbury, Oxfordshire, for a hammer price of £500 – around treble its £100-£200 estimate. With buyer’s premium, the total price paid by a private UK buyer was £692.

The seller, 50, said: “It was in my dad’s garden shed. I didn’t realise it was there, just rusting slowly. It was mine in the late 1970s and early 80s when I was nine or 10. It’s got the original gear shifter – not the later T-bar from those pesky safety people. It was great for wheelies and potholes!

“I remember seeing the Chopper advertised in Look-In, a kids’ magazine at the time. The advert featured a bike with a T-bar gear shifter but this one has a single-lever shifter. My dad came home with the Chopper. He bought it second-hand from some chap. After I found it again, I was going to put it in a skip but the auction firm said it could be valuable.”

Jasper Marsh, auctioneer and valuer at Hanson Holloway’s Ross, said: “Vintage Raleigh Choppers are sought after so, despite its battered condition, we thought it would sell. Nevertheless, it exceeded our expectations. Choppers were in hot demand in the 1970s and 80s and they’re in hot demand now – fuelled by nostalgia. Back in the day, the Chopper was the bike to own. Every cool kid wanted one. They looked good and they were great fun to ride.

“The joy they bought back then, together with their iconic design, have delivered some impressive auction results in recent years. For example, in 2020 a vintage 1970s MK2 Chopper in amazing condition sold for £1,250 at Hansons from an estimate of £400-£600. It had never been ridden and had been stored in a bedroom.

“This result is arguably even more impressive because the Chopper was in such poor condition. It needs some serious TLC but I’m sure the buyer will enjoy the challenge of restoring it to its former glory. Such is the power of childhood nostalgia a vintage Chopper is worth far more than its original retail price. In 1973 a Mk2 Raleigh Chopper cost around £34 – equivalent to £361 in today’s money.”

The Chopper, manufactured by Nottingham’s Raleigh Bicycle Company, was hugely popular due to its ground-breaking good looks and wheelie capabilities. It was designed in response to the American-made Schwinn Sting-Ray chopper-style, wheelie bicycle which launched in 1962.