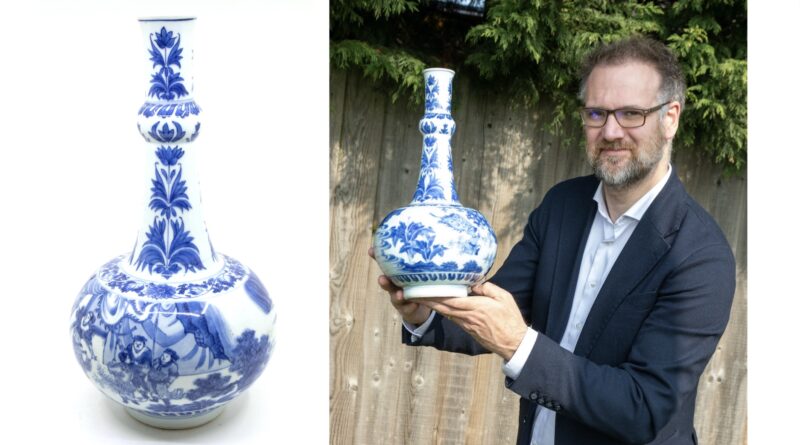 A vase discovered by chance in a modest home in Nottinghamshire – destined for house clearance – has sold for thousands of pounds at auction.

Charles Hanson, owner of Hansons Auctioneers, came across the vase during a routine house visit in Mansfield, and though his instinct told him it might be special he struggled to convince himself that could be the case.

He said: “I spotted the vase in an ordinary two-up, two-down. It was filled with a few dried flowers in a bedroom. I picked it up and asked the seller if he knew anything about it. He mentioned that it had been given to his father when he was working as a chauffeur in the 1950s.

“That prompted me to look closer. Working in the antiques world can feel a little like being a detective at times as you have to question, probe and hunt for clues to discover treasure in unexpected places.”

“The blue and white vase embellished in typical Chinese style but it seemed incongruous. Why would a valuable piece of Chinese ceramics be tucked away in a modest house in Nottinghamshire?

“The property was due to be cleared and an offer of £1,000 had been made for the contents – but I arranged for the vase to be auctioned. However, despite my gut instinct, I made a mistake. After examination, I decided it was repro and consigned the vase into Hansons’ March Antiques and Collectables sale with a guide price of around £50.

“But when the auction catalogue went live online extraordinary bids started to come in for the humble vase. I withdrew it from sale to give myself time to consult Chinese ceramics experts and, importantly, ensure we achieved the best price possible for our client.”

The item was identified as a Chinese blue and white bottle vase, transitional period circa 1640 – making it nearly 400 years old. Its bulbous body is vividly painted with a group of officials conversing while its neck boasts stylised tulips. The vase was re-consigned into Hansons’ April 1 Derbyshire Fine Art Auction with a guide price of £2,000-£3,000. It sold for £15,000 to a client in China.

“I was delighted and our client was astonished,” said Charles. “I was reminded yet again that antique treasures turn up in unexpected places. Inherited pieces of staggering value sit on top of cupboards or languish in glass cabinets for decades.”