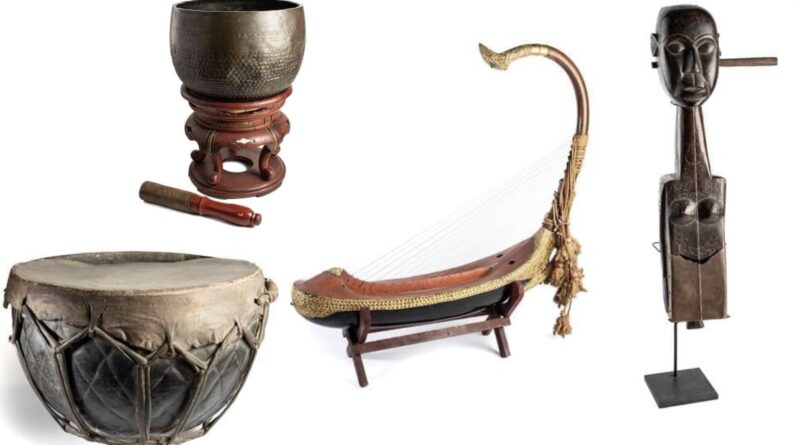 One of the largest and most diverse collection of antique musical instruments is to be offered at auction this month. The collection has been amassed over 40 years by English collector and dealer, Tony Bingham, and is unsurpassed in its variety, breadth and quality, with instruments from around the globe.

This extraordinary collection will be a highlight of Olympia Auctions Asian Works of Art sale on May 11.

Commenting on the collection, Olympia Auctions specialist Arthur Millner said, “We are delighted to be selling a unique collection of musical instruments from around the world, as part of our sale of Asian Works of Art. This extraordinary assemblage is the result of an enthusiasm sustained over more than 40 years of travel by a London collector and dealer Tony Bingham. Almost every type of noise producing device is represented, from various types of drum from places as diverse as China, New Guinea and Africa, to Central Asian Jews’ Harps and Rajasthani rattles. Tibetan trumpets, a harp from Mexico, a bamboo stringed instrument called a Valiha from Madagascar and a Bulgarian duct flute are amongst over 100 rare and unusual items.”

Tony Bingham has been one of the leading figures in the world of antique musical instruments for over fifty years. His passion for the field began in the 1960s, when he began buying and selling from his London home. Such was the success that he started a shop on London’s King’s Road, then took premises on Soho’s Poland Street and finally a gallery on Pond Street, Hampstead, which was his base for almost four decades. Tony has dealt in instruments from all over the world and has sold to the world’s leading museums and institutions in the United States, Europe and Japan. Now retired he will be offering his unparalleled collection for sale, much to the delight of collectors far and wide.

Among the highlights is a Sudanese kettledrum known as a Nihass, dating from A.H. 1203/1788 A.D (lot 344). It was acquired in Sudan in 1899 by Lord Edward Cecil (1867-1918), son of the British Prime Minister, Lord Salisbury and is thought to have been brought to England following the Battle of Omdurman (1898). It bears the inscription of the original owner’s name Malkh Rahamah al-Amin and a second inscription of the place name, Heifah. This type of drum was used in northern, central and western Sudan and played in time of war, to announce a great calamity, or the death of a chief.  Created in copper and hide, the sides feature a beaten lozenge design. It carries an estimate of £400-£600.

A group of 7th-century Japanese cup gongs in the sale, known as Dobachi, were used by the head priest in Buddhist rituals to mark important parts of the ceremony. Created in beaten copper alloy and in a bowl-shaped form, the sides feature stippled decoration in low relief. They also feature inscriptions around the edge, such as: ‘Ei Roku, eight-year, third month, Kyoto South Zen temple, treasure…Oda Nobunaga’. Oda Nobunaga who is referenced, was the head of the very powerful ‘Oda clan’ and launched a war against other feudal lords to unify Japan in the 1560s. This earned him the nickname of ‘Demon King’. He became one of the most important figures in 16th century Japan. Estimates in this group of Cup Gongs range from £300-£1,000.

One of the oldest instruments in the sale is a Dong Son drum from northern Vietnam, which dates from 5th century BC. Examples of these drums have been found in burial sites datable to the Dong Son period, 5th century BC – 1st century AD and are thought to have had a role in fertility rites. This is a very early example and is cast in bronze with a circular top featuring a radiating pattern and a central medallion in low relief. The sides comprise bands of a stud and hatching decoration, with twin strap handles on either side and around the foot is a frieze of repeated triangular motifs. This extraordinary slice of ancient history carries an estimate of £800-£1,200.

Among an exceptional selection of stringed instruments is a group of Santal lutes from the tribal region of eastern India, known as a Dhodro Banam. The Santal tribe, who are still the largest in the Jharkhand state of Eastern India, consider these instruments an aspect of their own selves, which can be seen in the instrument’s shape, which emulates the human figure. These instruments, which mostly date from the 19th century, often feature just a single string and are played with a bow in the manner of a violin, but in a vertical position. A notable example, created in wood and hide in a stylised female human form with her head as the headstock and the string emerging from her chin. The long neck and rectilinear body is carved with hands, breasts and shallow linear decoration. It is estimated to fetch £300-£500.

Among some of the extremely rare instruments with stand-out provenance in the sale, is an early 20th century large ceremonial slit drum, known as a Garamat from New Guinea. The drum was previously acquired by the Christensen Fund and donated to the Western Australia Museum. It was purchased by Tony after it was deaccessioned in the early 1990s. The drum is long and cylindrical in shape, with a linear opening running along the top. The sides are carved and painted with abstract motifs in red, white and green and at each end is a projecting finial in the form of a human figure with a mask-like face. It is estimated to fetch £1000-£1,500.

A 19th-century column drum from the Middle Sepik River in New Guinea  is also cylindrical in form with a hollowed body and a central handle. The drum’s sides are carved and feature painted designs and faces with beaked noses in relief. It is estimated to fetch £500-£700. An important 19th-century bronze drum from a very well-known collection in Vienna (the H.L. Diamond Collection), is from the Sunda Islands in Indonesia. The cast drum known as Mokko is double bell-shaped in form, with a flat bronze head and open base. Its exterior is decorated with scrolling tendrils in low relief and its upper portion comprises four loop handles. It is estimated to fetch £700-£900.

Also in the sale is a particularly fine and elaborate 19th-century conch shell ritual trumpet from Tibet, known as Dung-dKar. The trumpet, which is completely encased in silver, features very fine workmanship. It is covered in chased and repousse sheet silver and is set with turquoise and coral. Its extensive decoration includes dragons, birds and other animals amidst clouds and densely scrolling vegetation. A very similar example can be found in the Museum of Fine Arts, Boston. It is estimated to fetch £800-£1,200.