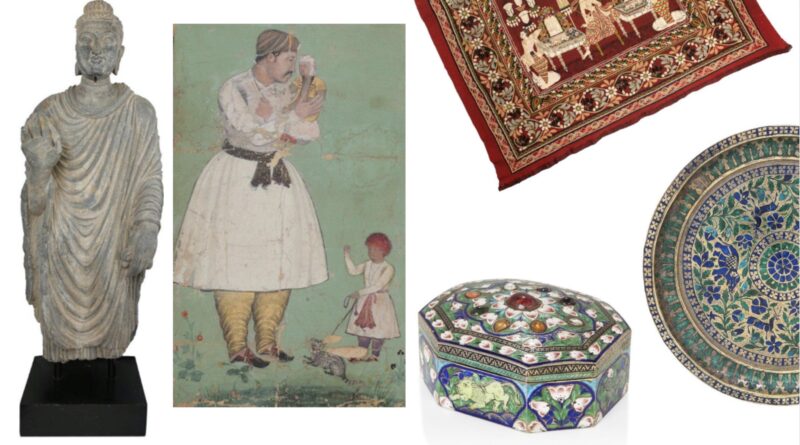 The Arts of India auction at Roseberys on Tuesday June 14th features a wide array of art from the Indian subcontinent and encompass a vast range of artistic output.

Alice Bailey, Head of the Islamic & Indian Art department commented: “First and foremost we are incredibly pleased to be offering several works attributed to Bishan Singh (1836-1900), a Sikh painter known for his large durbar scenes (lot 216) and his nephew Kapur Singh of Amristar. Roseberys was fortunate to sell a Bishan Singh back in 2013 and the work present in the upcoming sale exhibits the fine detail and colour palette so distinctive of his style.

“We have a large standing grey schist Buddha from Gandhara, along with other early stone works (lot 1). An archive of notes, drawings and watercolours of Indian botanical interest relating to H.C. Cleghorn (lot 236) is a very important record of works by the 19th-century Scottish botanist and is the only known material outside the Royal Botanic Garden Edinburgh. We are also pleased to present a number of early Mughal paintings, such as a family portrait of Akbar the Great (lot 159) as well as Pahari paintings (lot 201). We are also very pleased to offer four works by Francis Newton Souza (Indian, 1924-2002) from the widow of Indian art critic K.B Goel (lot 265). The works are chemical alteration on magazine paper, a technique used frequently by Souza and are the leading works in a very strong contemporary section of just under 50 lots which featured artists such as Jamini Roy, Padamsee, Broota and M.F. Hussain.” 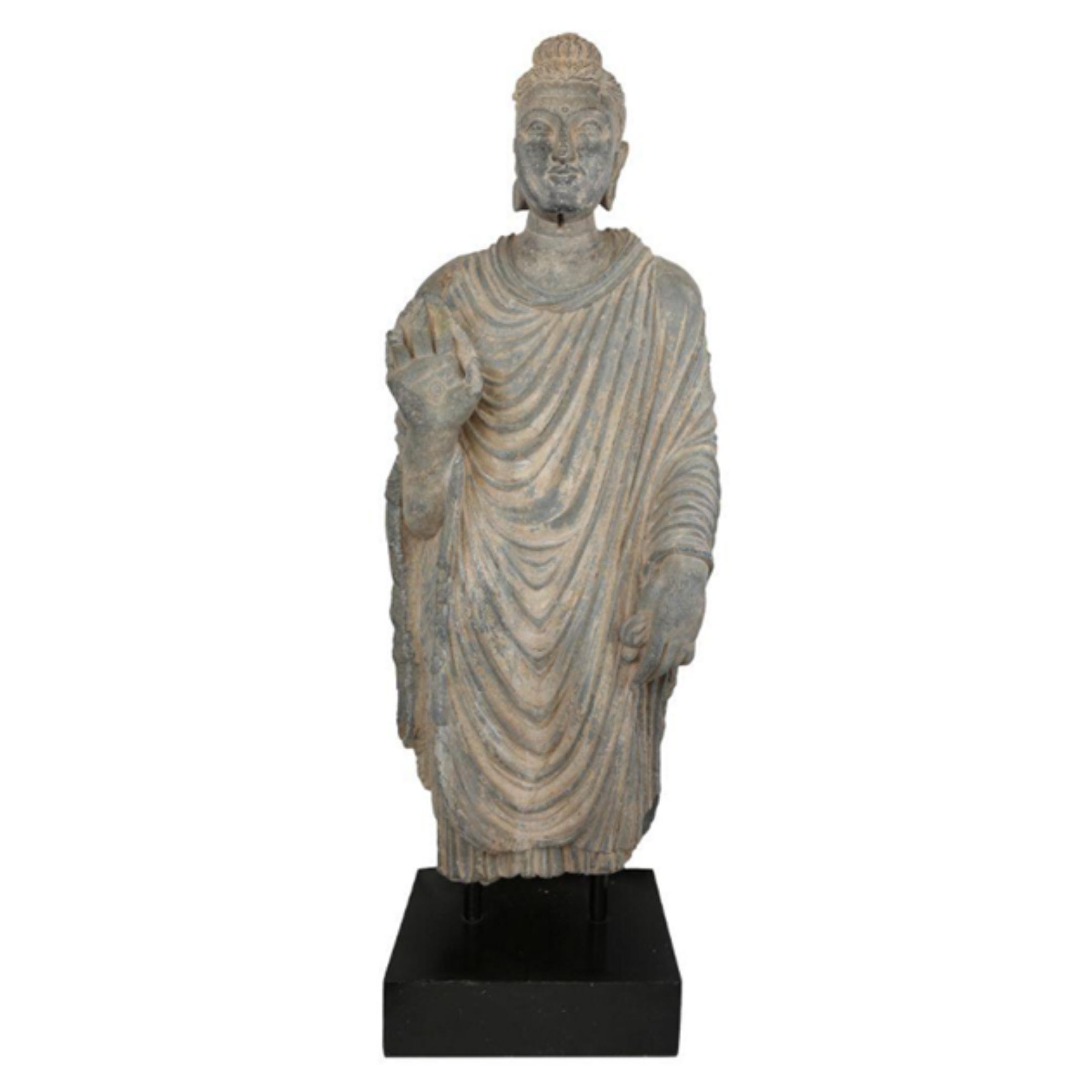 Leading the sale is lot 1, a Gandhara life size standing figure of Buddha, 2nd/3rd century, which comes with an estimate of £20,000- £25,000. Wearing a full-length sanghati, the Buddha’s right hand is raised in an abhayamudra. The Buddha that measures 130 cm in height, comes with provenance from a Private Japanese Collection formed in the 1970s, which Roseberys first featured 10 years ago. 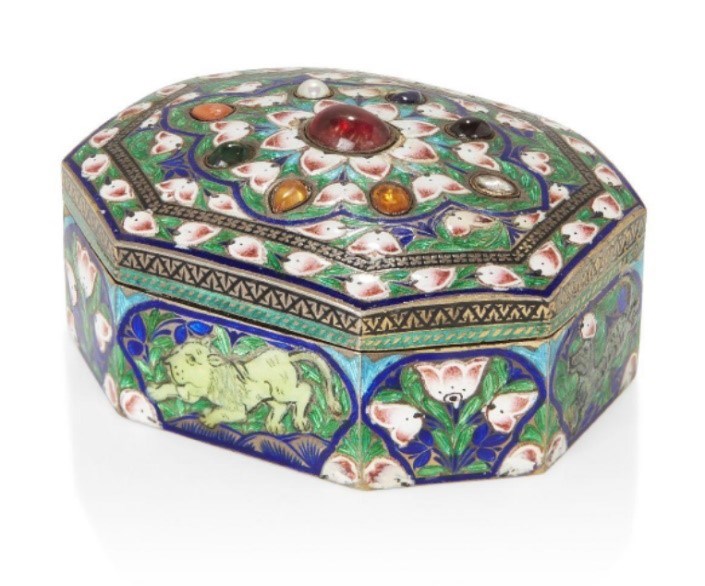 Estimated to make between £600- £800 is lot 87, a Mughal Navratna-set enamelled gold pan-box, probably Lucknow, early 19th century. Of octagonal shape, the box is set with teardrop and circular shape stones on the lid, on a ground of pink and white enamelled floral sprays with green leafs, a border of repeating similar surrounding, the sides with square and rectangular cartouches containing enamelled scenes of various animals. 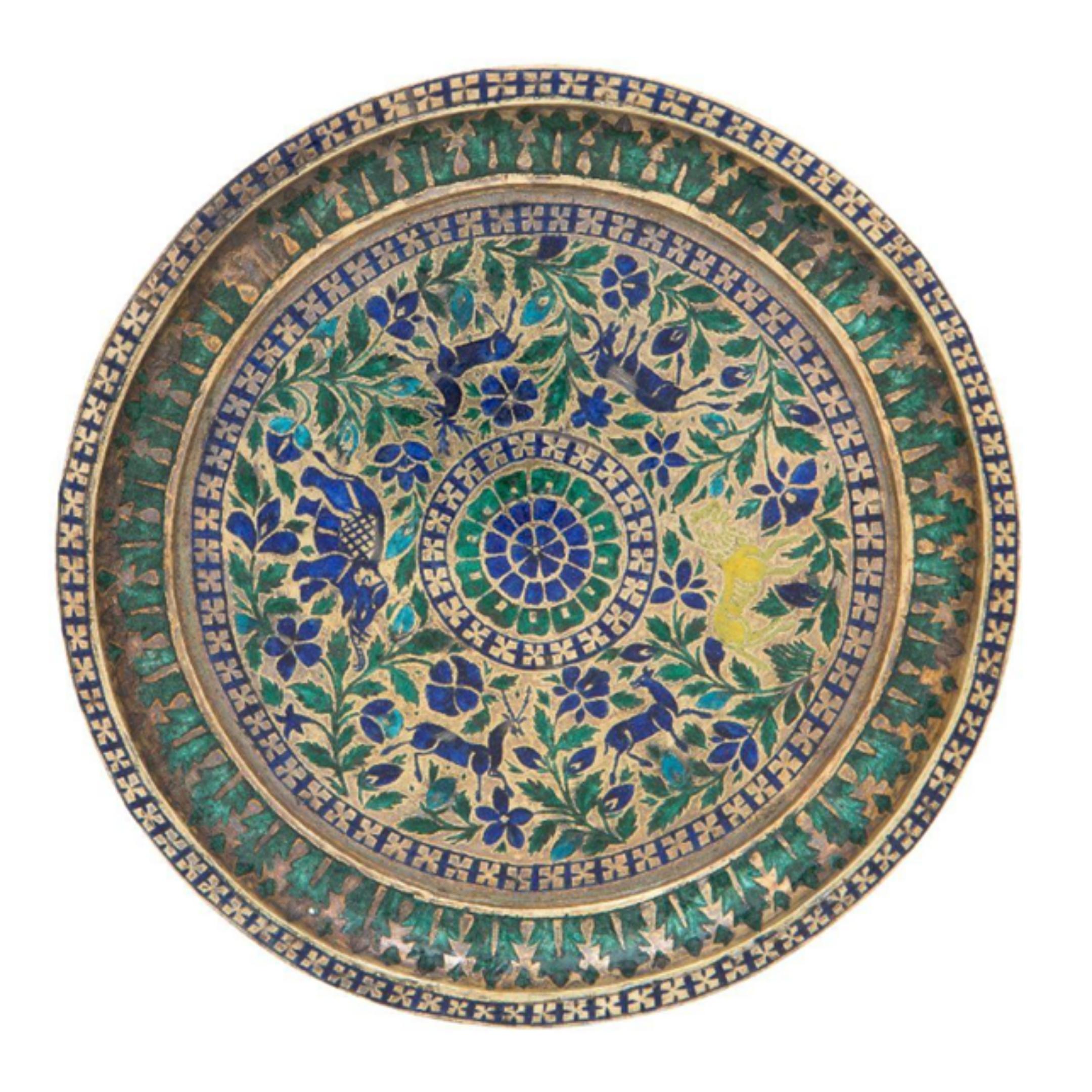 Lot 90 on offer is an enamelled silver gilt dish, Lucknow, North India, 18th century. The dish is decorated with blue, green and yellow enamels on gold ground, depicting quadrupeds amidst dense floral decoration surrounding a central flowerhead, with borders of quatrefoil motifs on blue enamelled ground. It has an old square paper label and 19th century inscription and measures 15.5 cm. diam and weighs 99 grams gross weight. The provenance is with a Private collection of James and Dorothy Cartland. This impressive dish has been given the pre-sale guided price of £5,000- £7,000. 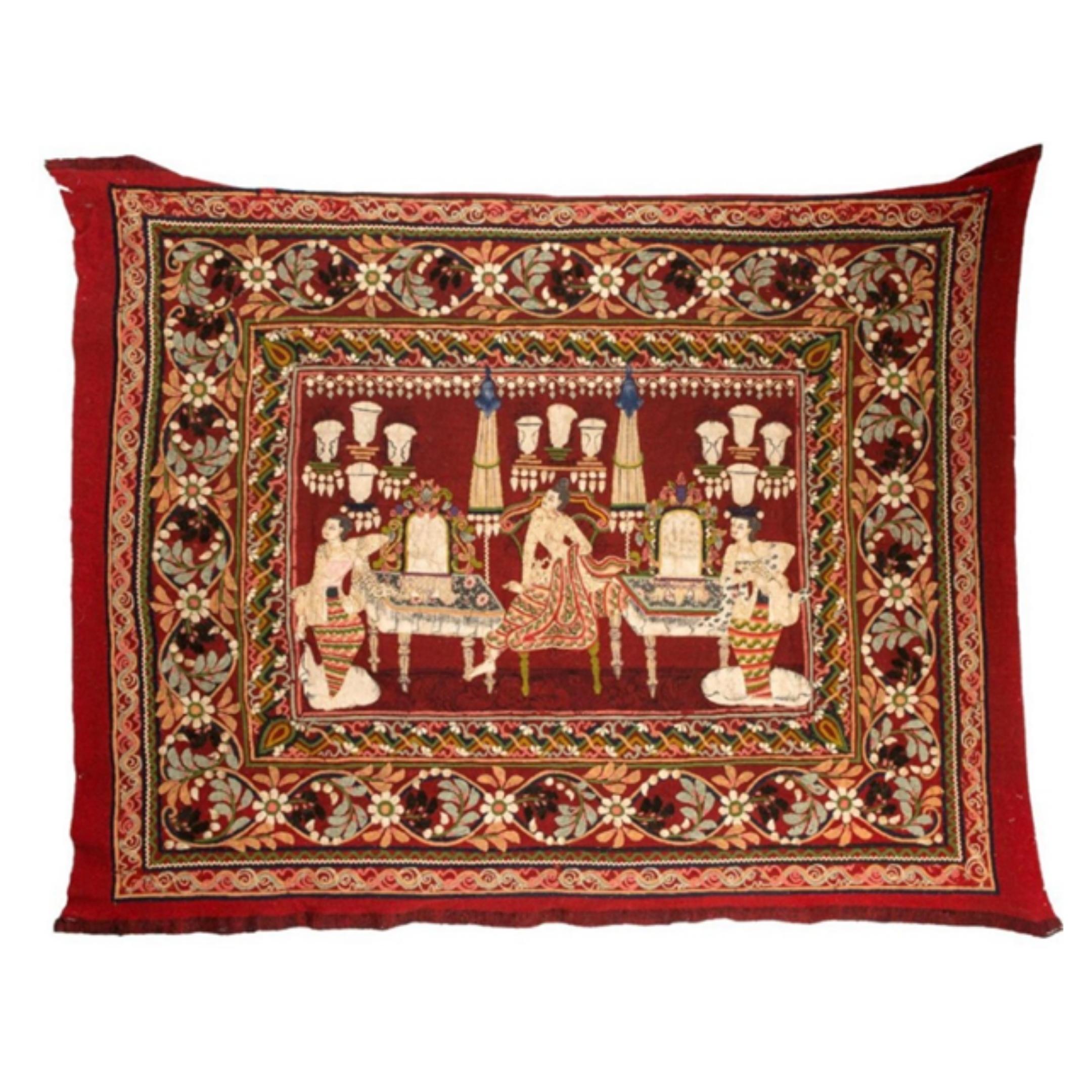 Lot 106 is a rare Burmese embroidered textile panel (kalaga), Myanmar, (Burma), 19th century, estimated to make £2,000- £3,000. Made in cotton, wool and felt applique on a wool ground with some painting, the central scene depicts an enthroned ruler with attendants either side, parasols behind and hanging chandeliers above, within a border of large flowers on a deep red ground. Measuring 148.5 x 116cm this lot comes with an interesting provenance. It was a gift to the present owner from Thea Porter Dorothea Noelle Naomi “Thea” Porter (1927 – 2000), who was a British artist, fashion designer and retailer who in the 1960s brought opulent Middle East fashions to London. 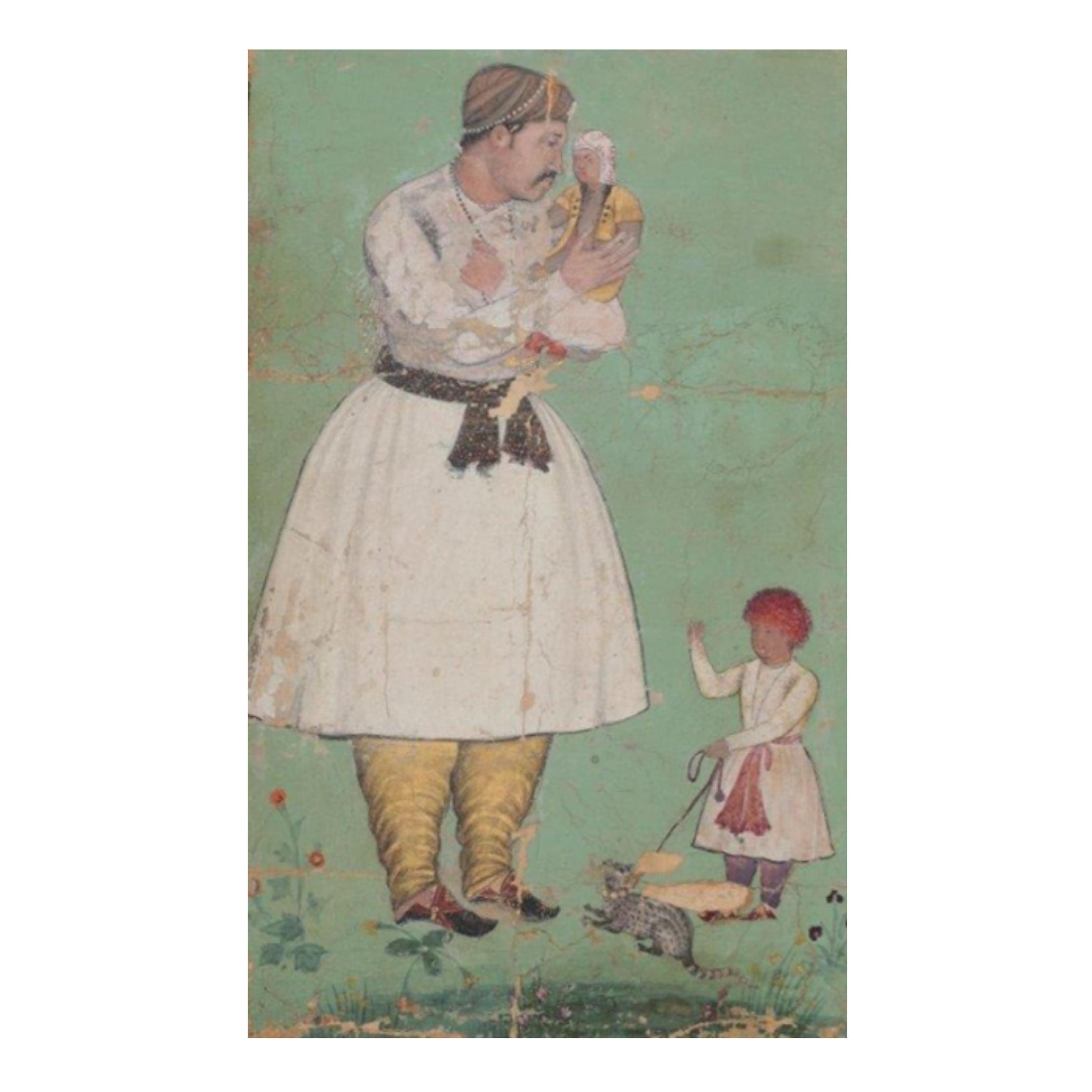 A Mughal portrait of the Emperor Akbar the Great (r. 1556-1605) with his children Jahangir and Prince Murad, Mughal India, late 16th century

Entered onto the market with an estimate of £2,500- £3,500 is lot 159, a Mughal portrait measuring  11.2 x 7.2cm of the Emperor Akbar the Great (r. 1556-1605) with his children Jahangir and Prince Murad, Mughal India, late 16th century. Completed using opaque pigments heightened with gold on paper, Akbar stands to left in a white jama with black floral sash, holding his younger son who wears a white and red hat and gold tunic, his older son depicted waving and with a small leopard on a leash. To reverse an identifying inscription in black in Persian and in Devanagari. 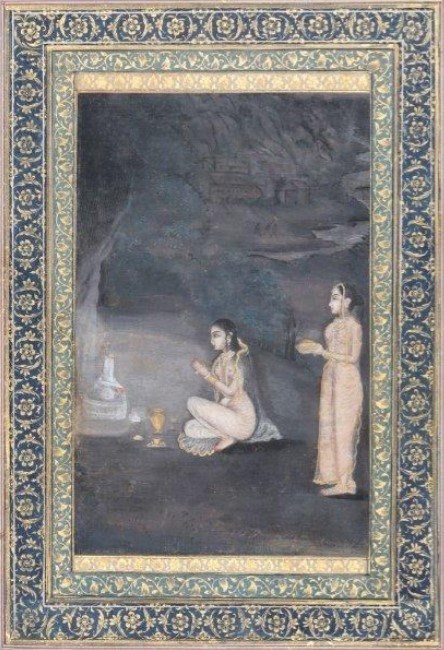 A Mughal night scene with lady and attendant at a Siva lingam shrine, double-sided leaf from the Fremantle Album, India, first half of the 18th century

Lot 168 is a Mughal night scene with lady and attendant at a Siva lingam shrine, double-sided leaf from the Fremantle Album, India, first half of the 18th century, coming with a pre-sale guided price of £4,000- £6,000. The leaf is calligraphy signed by Ali, opaque pigments on paper, folio measuring 48 x 35.5 cm and painting measuring 16.4 x 10.5 cm, with provenance from a Private collection UK. This leaf comes from the so-called Fremantle Album, thought originally to have been made for Shuja’ al-Daula, the Nawab of Awadh around 1770 and brought to the United Kingdom by Admiral Sir Edmund Robert Fremantle in 1891. The paintings in the album are characterized by their gold speckled borders and gold cartouches containing captions above the painting. Many of the paintings, like the present one, begin with the phrase ‘tasvir-i husn’ or ‘depiction of beauty’. The cartouche in reads ‘Depiction of beauty: the worship of Mahadev’. The verso consists of verses from a ghazal of Shah Ni’matullah Wali, in praise of himself. 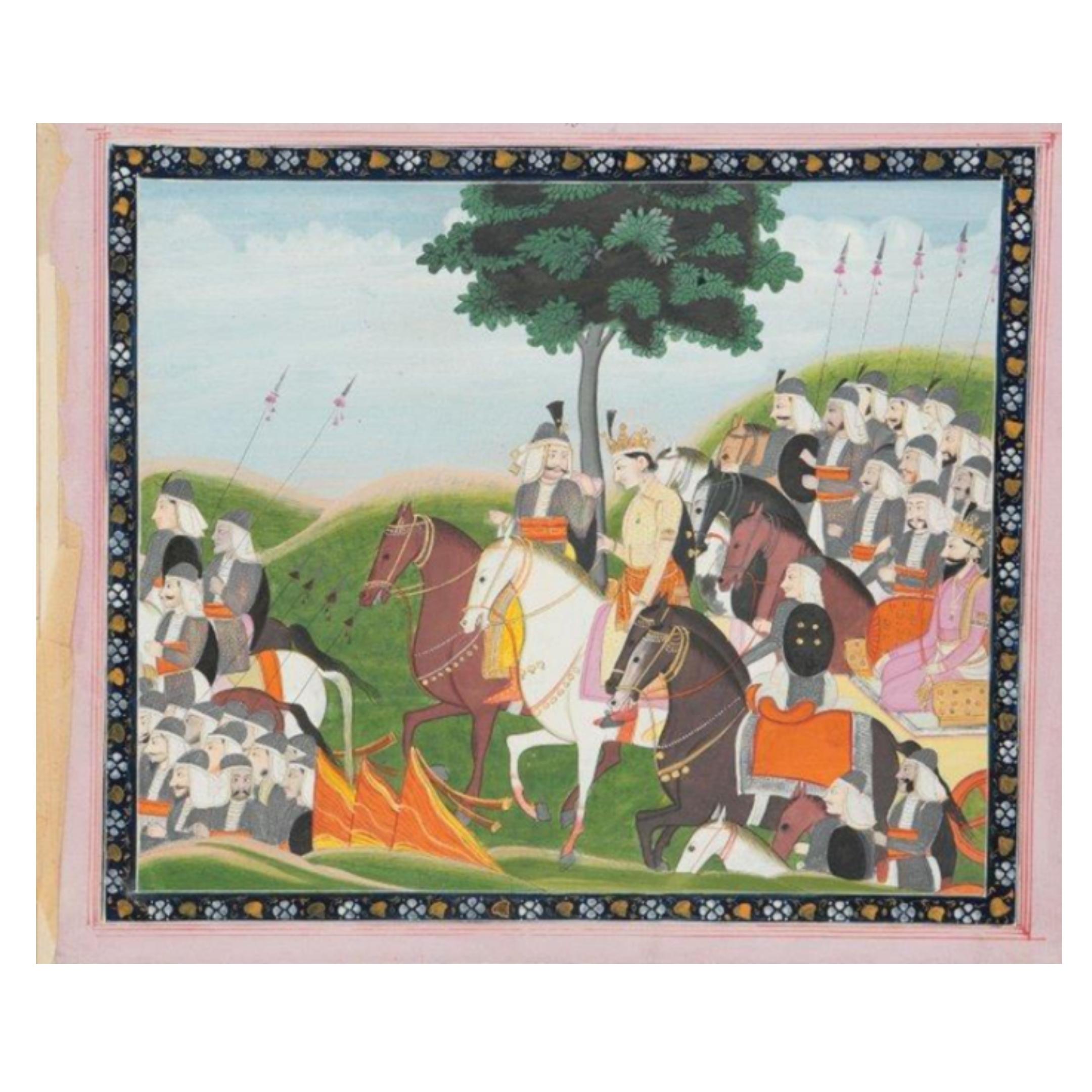 A Prince being advised by his military chief, Guler, India, circa 1850

Lot 201 on offer is an Indian work of art, circa 1850, opaque pigments heightened with gold on paper, from a Private UK collection acquired in 1990. The intricate work which is estimated to make £4,000- £6,000 depicts a prince being advised by his military chief, Guler, the royal party shown advancing from the right in a hilly landscape, the King seated in a chariot in the midst of his mounted army, a further group of footsoldiers ahead, within outer floral border, on pink page.

Entered onto the market with an estimate of £15,000- £20,000 is lot 216 by Bishan Singh (1836-1900) attributed, Worshippers at a shrine, probably Amritsar, North India, circa 1880, gouache on paper heightened with gold. The work measuring 35 x 22cm comes from a Private European Collection. This painting bears many of the hallmarks of Bishan Singh’s work. The portrait of each figure is carefully executed and the pietra dura decoration on the architecture framing the scene is shown in typically meticulous detail. The colour palette typical of his work includes vivid green, yellow and blue. The trees are very similar to those which appear in the background of his durbar scenes. Bishan Singh, also known as Baba Bishan Singh, came from a family of artists operating in Lahore and Amritsar in the second half of the 19th century. The family were responsible for painting and maintaining the murals and motifs on the walls of the Sikh holiest shrine, the Golden Temple, and it is there that Bishan, along with his brother Kishan Singh, learnt his trade. Whilst a keen painter of scenes of daily life in the Punjab, Bishan Singh became particularly famous for his detailed depictions of the Court of Maharaja Ranjit Singh (1780-1839).

Lot 265 is a highlight contemporary work of art on offer, four chemical works by Francis Newton Souza (Indian, 1924-2002), from the Private Collection of the distinguished art critic K.B. Goel, whom this work was gifted by the artist in the mid-1980s. Landscape with Church and Palm Trees, Chemical Alteration on Magazine Paper is mounted, framed and glazed, measuring 68.5 x 25.4cm and has been given the estimate of £5,000- £7,000.