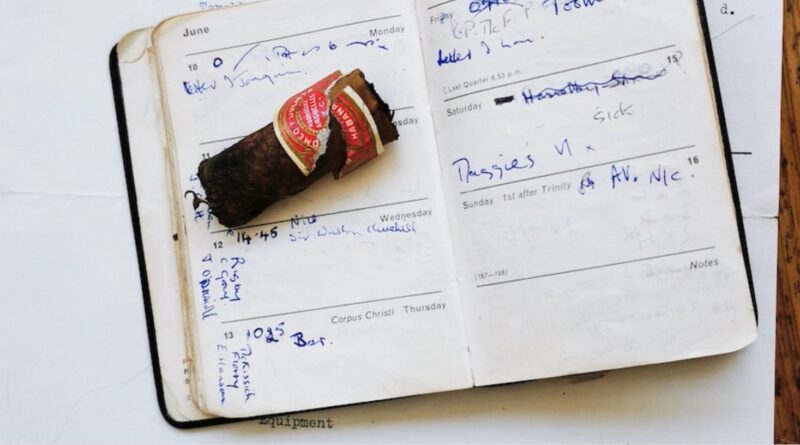 A cigar stub that belonged to wartime prime minister Sir Winston Churchill is set to sell at auction next month.

Just five centimetres remain of the Romeo y Julieta, Habana, which Churchill smoked during a flight to Nice on Wednesday, 12th June 1963, presumably for a painting holiday. It is being offered for sale by West Sussex auctioneers Bellmans on July 14. 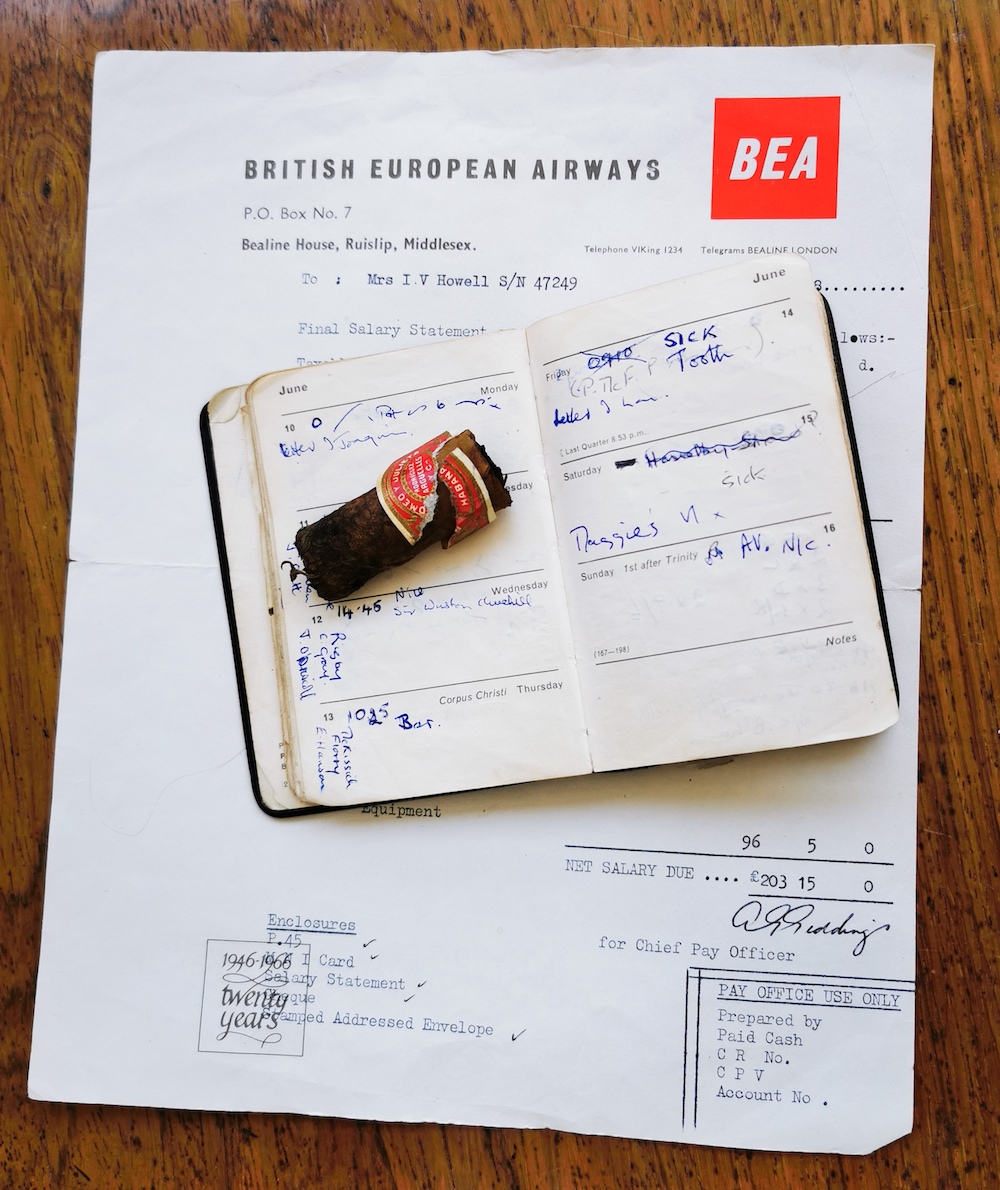 The vendor worked as an air stewardess for British European Airways (BEA) at the time and wrote in her 1963 diary on Wednesday 12th June ‘Nice, Sir Winston Churchill‘. Iris White, who was in her early twenties at the time, remembers: “It was just a normal flight for us and I was very young, but Winston Churchill obviously meant something to me and I remembered that his name was synonymous with cigars. When I saw that he had left the cigar stub in the ashtray after the flight, I took it out and kept it as a souvenir. I think my parents were very impressed that Churchill had been on one of my flights.”

Included in the sale is her BEA diary for 1963, in which she kept notes of her work trips and any famous people who she was looking after on her flights. The entry for 12th June records Sir Winston Churchill’s name and the destination of his flight, Nice. Also in the diary is a list of famous people Iris flew with that year, as well as Churchill, they include; RAF pilot John Cunningham, mountaineers Chis Bonnington and Joe Brown, comedian and actors Arthur Askey, Jimmy Jewel and Lance Percival, ballerina Alicia Markova, politician Edward Heath, Lord & Lady Eccles, actor and diplomat Sidney Poitier, tennis player Kurt Nielsen, operatic singer Adele Leigh, and others. 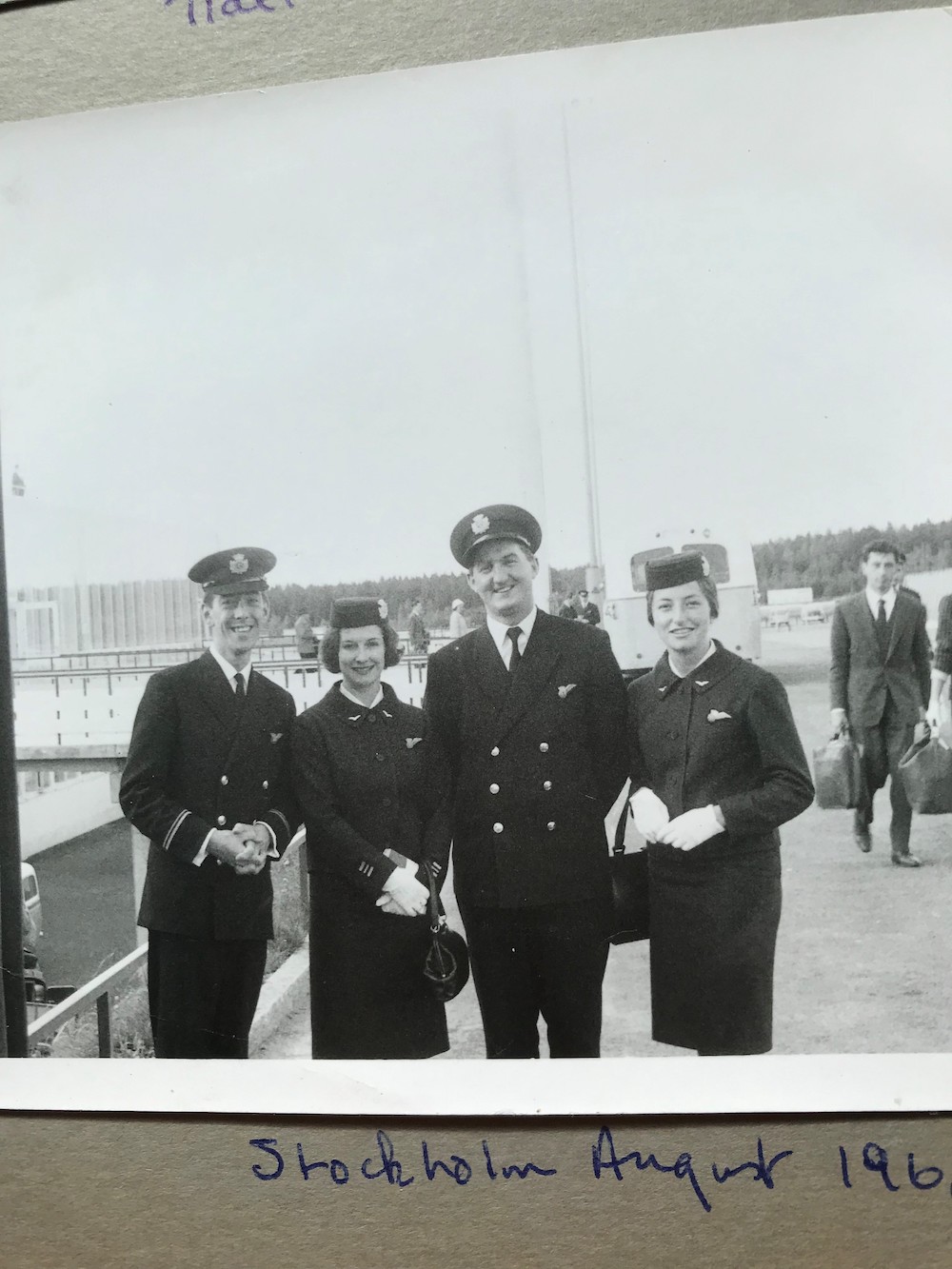 This Churchill lot is expected to sell for £800-£1,200 and also includes the vendor’s BEA Final Salary Statement on termination of employment dated 1968.

Bellmas will also be offering a substantial archive of manuscripts and printed material connected to Sir Winston Churchill (1874-1965). Among the highlights is a monochrome portrait photograph of Winston Churchill signed by him in 1954, which was taken by ‘Vivienne’ (Florence Vivienne Mellish (1889-1982)), who took portraits of five consecutive prime ministers.

The archive belonged to one of the four private secretaries to the Prime Minister at the time – one of them was always on duty and on call, overnight and at weekends, and had to endure Churchill’s idiosyncratic working methods and timetable. These included working in bed in the mornings, a long afternoon sleep and working after dinner until 3 am or later.

Other items include a signed presentation copy of The Illustrated London News. An Eightieth Year Tribute to Winston Churchill. Statesman, Historian, Sportsman, Soldier and Orator. 1954. Edited by Bruce Ingram (London, 1954) and two printed telegrams from Churchill to the private secretary, thanking him and his wife. The lot also includes a selection of items relating to Churchill’s funeral, including a personal invitation to the State Funeral and Order of Service as well as a letter from Clementine Churchill after the funeral in 1965. The archive also includes two further letters from Clementine conveying invitations.

A small autograph note in an unidentified hand is quoting from a probable late-night conversation with Churchill: “The only reason I ever went into politics was to get things done in the way I thought was right. I have never had any other ambition than to prevent things being done in a way I did not like. But it is [?]often harder to get things done in one’s own way.’ W.S.C. 16.6.54, 1.15am”.

The archive also includes a portrait photograph of Clement Attlee and one of his famous doodles from 1951. The private secretary’s Queen Elizabeth II Coronation Medal in its original box with accompanying printed presentation letter on paper headed “Buckingham Palace” is also part of the collection which is estimated to sell for £5,000-£8,000.