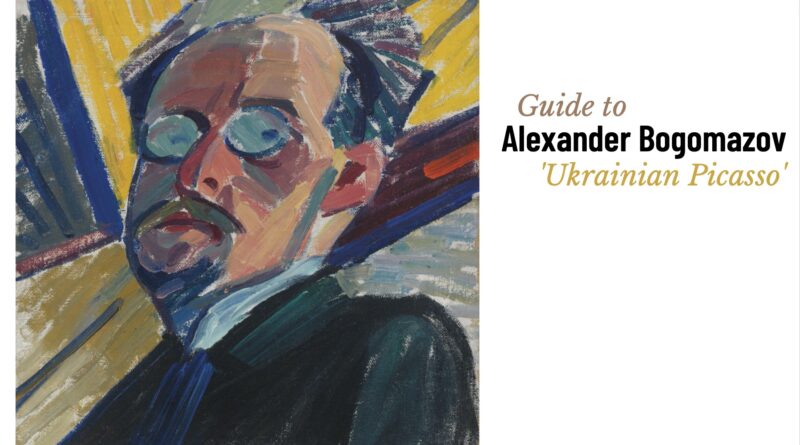 Virtually unknown in the West, discovering the work of Alexander Bogomazov – the ‘Ukrainian Picasso‘ – was a life-changing experience for Mayfair art dealer, James Butterwick

Ask any collector about the object or painting that changed their life and the chances are the memory will be a potent one. Such was the case for the Mayfair art dealer, James Butterwick, when he first set eyes on the work of the Ukrainian artist and art theoretician, Alexander Bogomazov (1880-1930).

He said: “I clearly recall seeing it for the first time in 1988 when four of his paintings were shown at the Barbican Gallery’s exhibition 100 Years of Russian Art from Private Collections.”

At the time, Butterwick was already a collector and specialist in Russian and Ukrainian art but what he saw astounded him. He said: “Aside from being amazed at the power and dynamism of the paintings, I was astounded that this was an unknown artist, a figure in the shadow of Malevich, Chagall and Kandinsky.

“In my opinion, he is greatly undervalued and deserves to be mentioned in the same breath as that of the masters of Russian avant garde.”

More than 25 years later, at TEFAF in 2015, he sold four works by the Ukrainian artist to the Kröller-Müller Museum in The Netherlands. At Maastricht, the annual art fair that most accurately indicates the state of the markets, he will showed more works (with 15 percent of the money raised being donated to humanitarian aid). He continued: “While the value of the works has soared exponentially, the artist is still a relative unknown, especially outside of the Ukraine where, to all intents and purposes, he is their greatest national artist.”

Differentiating between ‘Ukrainian’ and ‘Russian’ is not easy when it comes to artists. Birthplace is one criterion, time spent working in the country another. Kazimir Malevich who was born in Kyiv had Polish as his first language, but is invariably considered Russian. Malevich taught at the Kyiv Art Institute from 1928-1930 (at the same time Bogomazov was head of easel painting). In fact, in Bogomazov’s 1914 treatise Painting and Elements, he considers how a black square on a white background is the “most perfect form”, a year before Malevich’s most famous work.

One of the reasons why Bogomazov has remained in the shadow of both his Russian and Ukrainian colleagues may be partly geographic; he never travelled to Western Europe. In fact, he only left Kyiv on three occasions: once to Moscow, once to Finland and once to take up a teaching job in the Caucasus (then part of the Russian Empire). He was an artist essentially rooted to his home spot.

Bogomazov’s life spanned almost unendurable hardship. Abandoned by his mother and with a strained relationship with his father who disapproved of his career, he lived through WWI, revolution, civil war, famine and tuberculosis which killed him aged 50.

Ukraine’s turbulent history inevitably took its toll on the artist. Between 1918 and 1921, as the government of Kyiv changed 11 times, his focus was less on art and more on surviving the civil war. Between 1917 and 1925 Bogomazov virtually abandoned easel-painting, producing just two oils in nine years.

His reputational struggle continued even after his death when everything directly or indirectly related to Bogomazov was banned by Soviet officials. His art even came under physical threat. Bogomazov’s granddaughter, Tanya Popova, recalls how, during WWII, when Kyiv was occupied, her grandmother – who lived in the ‘forced eviction zone’ – single-handedly preserved the work of ‘her Sasha’ from both the Soviet authorities and Nazi invaders. She recalled: “My grandmother rescued a trunkful of priceless paintings and manuscripts by pushing them in a wheelbarrow, on foot, to Svyatoshyno, many miles away. When Kyiv was liberated she brought everything back the same way.”

Between 1914 and 1915, Bogomazov made numerous drawings of Kyiv and its environs, with streets sloping and plunging dramatically across the picture plane. He was creatively stimulated by Kyiv’s rapid industrialisation while he was training to be an artist.

The capital was the first city in the Russian Empire to acquire an electric tram network and the second in Europe. Bogomazov knew that an object was identified by its edges and its angles. In Kreshchatik he depicts the pulsing artery of Kyiv with its urban frenzy and movement of hats that merge into the perspective.

James Butterwick said: “The greatest strength of Bogomazov is the kinetic energy of such drawings, and the scene that presents us of Kyiv’s main street is one of intersecting planes and people whose form has changed.”

As Bogomazov wrote: ‘Look at the boxes of our brick buildings and you will sense a powerfully upward motion of the mass. See how powerfully and sharply the corner of an iron roof pierces the serene mass of green trees. The artist’s goal is to re-create this impression of vigorous life.’

In the final years of his life, Bogomazov worked on a cycle of pictures with the same subject: sawyers. Having been diagnosed with tuberculosis in 1920, he knew he was dying but the rainbow colour scheme he adopted for his last major work seems infused with joy and hope.

The triptych includes Sharpening the Saws, Sawyers at Work and the third and final picture: Rolling the Logs.

While the latter remained unfinished, a number of pencil drawings and compositional sketches survive, revealing how the work evolved, including the only known colour sketch. It gives us a detailed idea of the work’s intended palette, and of what the painting – and the triptych as a whole – was meant to look like.

Bogomazov worked on the pictures from roughly 1926 to 1929 – a period when political considerations were becoming the main criteria for judging art in Ukraine and throughout the USSR.

Participating in exhibitions required loyalty to the Soviet authorities, with artists forced to show their support for the country’s new social and political set-up. This process was initiated and controlled by NARKOMPROS (People’s Commissariat for Enlightenment), which organised exhibitions to underpin Stalinist ideology.

Bogomazov’s sympathies were left-wing. He was kicked out of art school for taking part in anti-Tsarist demonstrations. He welcomed the October Revolution and spent 1918-20 decorating streets, buildings, a train and a ship with artistic Communist propaganda. But his ardour waned and he had no truck with the authoritarian realities of Soviet society.

Sawyers seems to cock a snook at them. He deliberately chose a universal theme that had no particular relevance to Soviet society but which, being built on the sweat of workers’ brows, was beyond ideological reproach.

Bogomazov’s greatest inspiration and support was his wife, Wanda Monastyrska, a self-assured fellow student at the Art Institute in Kyiv, whom he met in 1908 and fell in love with on first sight. Initially she rejected him and it would be some time before he won his muse’s heart.

But their eventual marriage in August 1913 detonated what the author and Ukrainian avant garde specialist Dmytro Horbachov called an “explosion of creativity” for Bogomazov, whose artistic career could have fizzled out into despair and emptiness without Wanda’s support.

Calling her his “Dove, Dina”, he wrote: “I love everything about her. How fine and tender she is. I will always love her. She has filled my soul… It is extraordinary how Fate has tied the knot of my existence with this slender, refined, kind and sensitive girl. My art has retreated, a woman has come and closed it from my eyes… my art is in the woman – in this beautiful particle of the world.”

In early 1917, Bogomazov returned from the Caucasus, where economic hardship forced him to take up a teaching job, for the birth of their daughter, Yaroslava. Subsequent images depict family summers at their dacha in Boyarka.

In many ways Bogomazov’s numerous portraits of Wanda document both his progression as an artist and the nature of their relationship. Three larger, vertical portraits show the development from a more guarded Wanda in Front of a New Year Tree to a sensual Wanda Looking Over her Shoulder to the abstract Wanda in Profile. While the later Portrait of the Artist’s Wife is pure abstraction.

The Ukrainian avant garde movement spanned the first three decades of the 20th century, originating at a time when art across Europe was rejecting the realism and naturalism of previous generations.

There were three centres of the avant garde in Ukraine: Kyiv, Odessa and Kharkiv where a dynamic, close-knit creative community developed in the 1920s, when the city was not just Ukraine’s political centre but also its artistic and cultural capital. It was home to forward-looking artists and experimental painters originating from the Kyiv School of Art, including Alexandra Exter, Alexander Arkhipenko and Aristarkh Lentulov.

Each made a significant personal contribution to European Modernism in the ‘20s and ‘30s.Their credo was art has no limits. Seeking out a national artistic identity, the movement looked to Ukrainian folk art, imbuing its elements and archaic forms with a contemporary = dynamism often expressed in abstract form.

The first steps of the Odessa avant garde in 1917 were accompanied by revolutionary mayhem, with the Black Sea port in the firing-line. By the time its last exhibition took place in the city in 1919, many artists had already emigrated or been killed in the civil war.

Their legacy was dispersed around the world – or lost. Little survived, apart from rare works locked away out of sight in museum storerooms or family attics. The great artistic discoveries of artists such as Bogomazov were laid waste by a totalitarian system hell-bent on destroying artistic freedom.